I was here once on business several years ago, but that was brief and fleeting and, truth be told, I couldn't really enjoy it.

We left for the city pretty early, but late enough to miss rush hour traffic. And, while this had the benefit of us not getting caught up in a traffic jam, it had the added detriment of available downtown parking being scarce. My guess is that we drove around for about a half hour before we were able to get into a pay lot for some ridiculously exorbitant fee. This mattered not: We were in.

Boston has some absolute jewels when it comes to historical places. Much like Philadelphia, much of the shaping of this country happened right here, along these very streets. Sure, the building may look somewhat different now, but visiting Boston is to visit where history actually happened. No textbook or school lecture can come close to rivaling that.

The streets in Boston are pretty narrow so, if you're driving, use extra care. In many cases, restaurants will spill their seating into the street. This is especially true on the north end, which is where you'll find Boston's version of Little Italy: 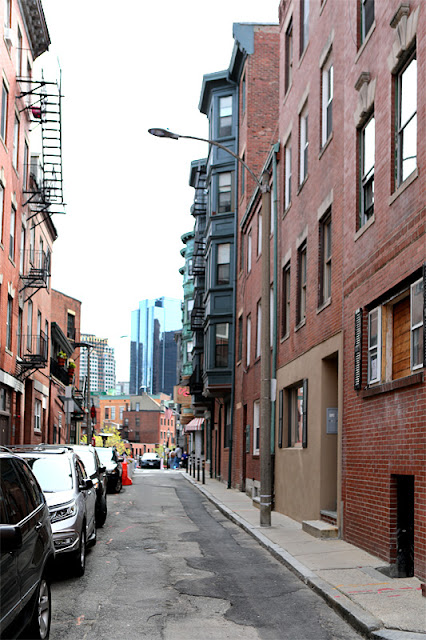 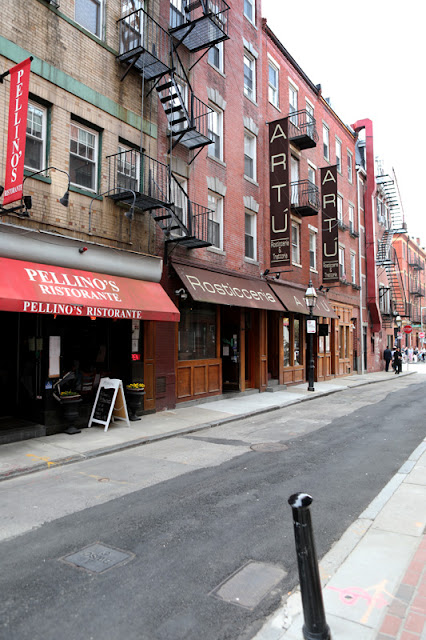 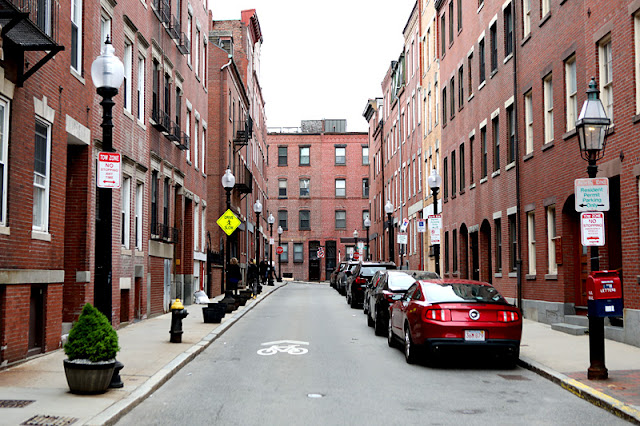 Now, remember how I said visiting Boston is to visit where history happened? Well, also found in the north end is a rather nondescript gray house. Back in the 1700's this house would be considered a small mansion, but it would be nothing so grand by today's standards. Frankly, there's nothing really noteworthy about it at all, save for the plaque reading "Here Lived Paul Revere 1770-1800" and another sign saying "The Paul Revere House": 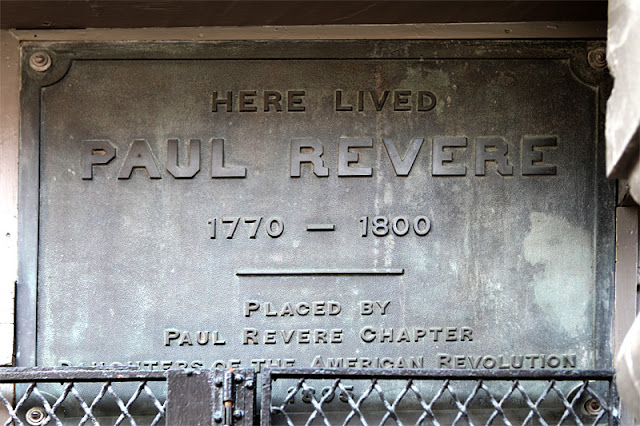 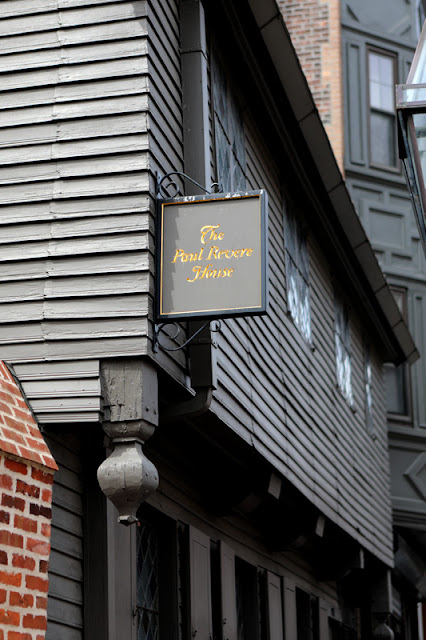 Tours of the Paul Revere House are offered for a very nominal $5.00 but, be forewarned, the tour goes by quickly. You see two rooms downstairs, and then (if memory serves) one room upstairs before being ushered into an expansive courtyard. As was very common in those days, a person's property was usually kept out sight from the street, and many had pretty grand courtyards protected by their walls:

Another site which played a storied role in the history of our country was memorialized by American poet Henry Wadsworth Longfellow in his poem which began:

"Listen my children and you shall hear, of the midnight ride of Paul Revere."

Of course, Longfellow didn't write his poem until 1860, when America found herself on the brink not a Revolutionary War but of a civil war. As a result, over the years many have pointed out historical inaccuracies contained it the poem. Frankly, I don't understand why some people can't just enjoy it.

But back to the site in question.

Everyone has heard the words "One if by land, two if by sea." This was referencing signal lanterns lit in the steeple of the Old North Church, to signify how the British were attacking. When Paul Revere (and the much maligned, and not as well known horseman William Dawes) made that famous ride, there were two lanterns in the steeple. 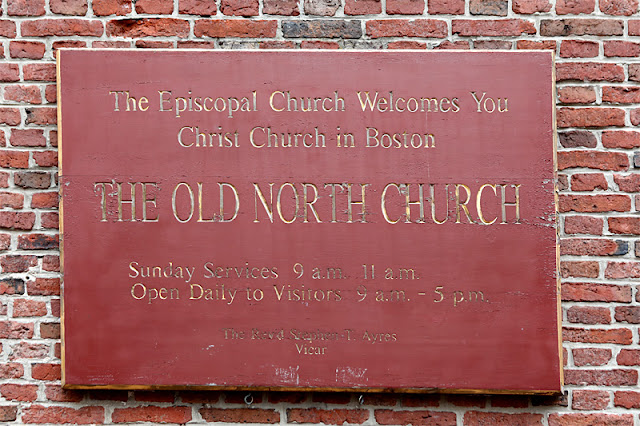 Once again, as a little boy, a place which, once upon a time, might be shown an almost mythical deference turns out to be an actual, real place. And I'll never be accused of being the most religious guy in the room, but I have to wonder what it must be like to be a parishioner there, knowing the important role the church played in the early days of developing the country.

Now, while I was off shooting the Old North Church, Jess was off shooting other things, and I don't know that we realized how separated we'd become. Leave it to Jess, though. She not only found a bar where we could grab a cold beer after a day exploring Boston, she found it in the basement of a pastry shop (sorry, no pics):

It was beginning to get a bit later in the day, and we still had one more stop to make. But, before doing that, we needed some refreshments and maybe a bite to eat. And if you're in Boston, can there be any other place to go?

When the producers of the television show "Cheers" were looking for a Boston bar to be owned by former Red Sox reliever Sam Malone, they didn't get much further than The Bull & Finch, right across the street from Boston's Public Garden. It was perfect for them in every way. Like the bar from the series, The Bull & Finch was a quaint, quiet local watering hole and, despite its obvious current popularity, it still has that vibe to a degree.

We opted to split the "Norm's Best" combo appetizer, as dinner would be waiting for us. That proved to be a good, tasty call. Onion rings, chicken tenders, and potato skins were perfect, and they were just enough to hold us over:

A visit to Cheers is a must if you're in Boston and anywhere within driving distance of Beacon Hill.

With our appetites temporarily sated, it was time for the final stop in Boston, and it's one I've looked forward to for a very long time.

Launched on October 21, 1797, the USS Constitution is the oldest ship of any type still afloat, and it remains the oldest commissioned ship in the United States Navy.

What we thought would be an easy "park and shoot" photo op turned into anything but. We ended up finding our way into some hotel pay parking lot (ten bucks, thankyouverymuch) which allowed us access to a view from just a pier away. Night was falling, and I knew it would be a perfect time to capture the ship's lighting along with the sky's twilight.

I'm pretty happy with what I got: 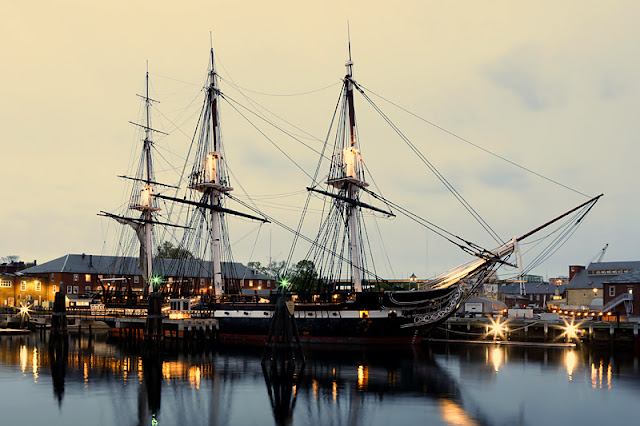 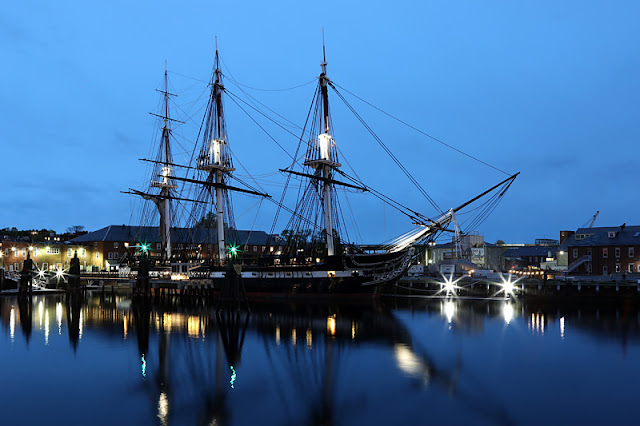 I've been asked how I was able to get those "star" shapes on the lights, the smooth water and the crisp focus on the ship. Well, it's not magic and, in fact, it's  it's pretty simple.

First, use a good quality tripod (I use a Manfrotto). Don't bother with the ones you find at Target or Best Buy. Buck up and pay real money for a quality tripod. You'll be glad you did Shoot in Manual mode and use a remote shutter release. Then, embark on the highly scientific method of playing around with your settings to find those which give you the look you're searching for.

Sadly, the USS Constitution would be our last stop in Boston. Having the opportunity to photograph such a magnificent ship was awesome, and that certainly wasn't lost on us. I hope to come back again one day to photograph it some more...

Seven years ago, I was hired by St. Augustine Social Magazine as a photographer. It was a real magazine with a shiny cover and pages and an ...