The Battery Sucking Siege That Is The iPhone 4s...

I am a member of an extraordinarily large club.

I have an iPhone:

While I've not completely finished my glass of Apple Kool-Aid, I must admit to being a fan. I probably exploit only a fraction of what the iPhone is capable of, though. Hell, I don't even know how to download music into the iPod app. But that's okay.

When I got my phone, of course, I had to get the latest and greatest. The iPhone 4, you see, simply would not do. I would need the iPhone 4s. After all, it had an "s", so it must be better.

My biggest issue with the iPhone 4s is the battery life. While the iPhone 4 I had would, seemingly, last forever, the battery on the iPhone 4s would start to drain if you looked at it funny. This one thing was a source of great distress, and one which I vowed to overcome.

Basically, it's an extended battery for the iPhone 4s, and it's all but solved my problem. As you can see in the photo above, the battery pack sits on the bottom, and the rest of the unit serves as a case for the phone.

The Mophie has its power indicators on the bottom. Simply press the button and up to four LED's will illuminate to let you know how much juice you've got:


The operation is simple. Assuming you've got a full charge (which, clearly, I'm not enjoying in the photo above), your iPhone will operate off its own internal battery when the Mophie is in the standby mode:

In the standby mode, the battery indicator on your phone will appear like this:


Flip the switch, and your phone uses the, well, "juice" from the Juice Pack Air:

I'm not a big techno-geek, so I usually don't get excited about techno-geek things. While I'm not excited, per se, I do have to say that I'm a fan of the Mophie Juice Pack Air. It does what it claims to do. Without it, I was getting between three and four hours out of my iPhone, with what would be considered "normal" usage. With the Mophie, though, I'm seeing between six and nine hours.

The cost? It was about $80.00, which was a lot less than I could've gotten it online with shipping. That actually kinda' shocked me. Usually you find stuff cheaper on the web. You don't expect the lowest price to be at the Apple Store, which is where I got this.

So, if you're struggling with battery life on your iPhone, check out the Mophie Juice Pack Air. It'll cure what ails ya'...
at April 26, 2012 No comments:

Mud Runs And Some People's Kids...

The "mud run" is a relatively recent phenomenon. While they've been around for years, they've recently picked up a bit in the popularity department. Personally, I dont' get it. Not only does it involves running (which I am loathe to do), but it also includes obstacles and, well, mud.

Such was certainly the case with the Gladiator Rock n' Run, which was held on Saturday, April 14, just outside San Diego in Lakeside, California.
Do you remember the show American Gladiators? It ran back in the early 90's, and one of the featured gladiators was this guy who went by the name "Nitro". Nitro spent the better part of each episode kickin' the Hell out of contestants who foolishly allowed themselves to believe that they could beat a group of "gladiators" who had the luxury of spending every waking minute of every day perfecting any number of different ways, of varying degrees of violence, to keep contestants from beating them.

"Nitro" began his public life not as a gladiator, though, but as professional football player Dan Clark, who played for the Los Angeles Rams. It was after this, and a stint in the European Football League, that Dan took on the persona of "Nitro" for seven years on American television.

Well, "Nitro" has gone back to his given name (seriously, how would "Nitro Clark" look on a driver's license?) and now puts his energies into the Gladiator Rock n' Run, which benefits TACA (Talk About Curing Autism).

There is very little that is not stupidly insane about a Gladiator Rock n' Run. Depending on where the course is being set up (it travels around the country), the course is three to four miles long. In the case of the recent even here in San Diego, the course was made up of 17 obstacles that participants had to navigate. The obstacles included everything from a castle, to a "polar bear plunge" to a 100 foot water slide.

There are those who take events like this very, very seriously. "Mudders" they're called, and they train hard to do well in these events. It's usually very easy to spot the serious runners from those who, let's say, try to have a bit more fun in the process. Take a look at these two pictures, and see if you can tell who's who: 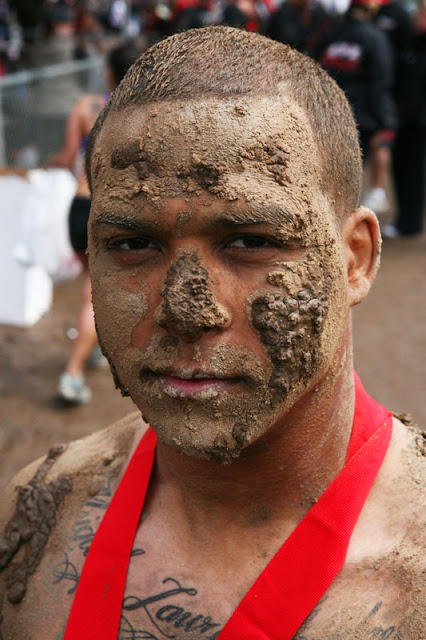 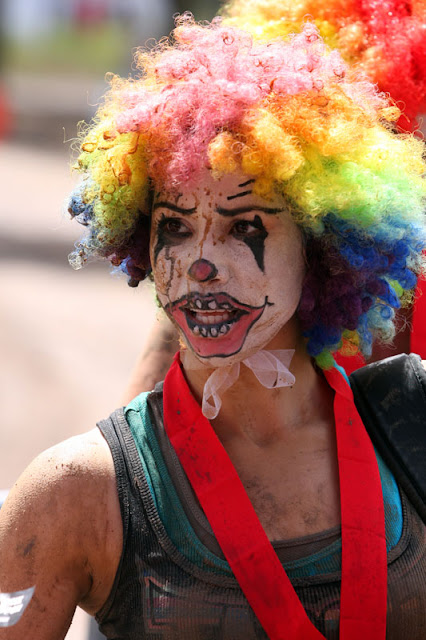 The entire event really is a spectacle. Aside from the personal challenge and charity aspects, I'm not entirely sure why someone would do this. But do it they will, and they do it with gusto.

If the Gladiator Rock n' Run (oh, they have bands, too) finds its way near you, go check it out. Even if you don't participate, you'll have an absolute blast just watching the insanity unfold...