I'm a Jets fan.
As such, you can probably imagine my dismay when they played the Steelers for the AFC Championship. I can only imagine what the outcome of that game would've been had the Jets elected to show up for the first half, since they made the Steelers look completely inept in the second half.
Ergo, I've no dog in this hunt, beyond wanting to see the Packers beat those who took out my Jets.
I've no profound words of wisdom to offer, hence the brevity of this entry. Let's face it: It's football, not rocket science.
I'll be off to a Super Bowl party for two reasons. First, well, because it's a party, and parties are fun. Second, the Super Bowl commercials are the best you'll see all year. The Darth Vader one this year is especially funny.
So, have fun, enjoy the game, and Go Jets.
I mean... er... nevermind...
at February 06, 2011 No comments:

My trip to Daytona began uneventful enough, considering that flight plan had already been altered from its' original state. It was all good, though. Instead of San Diego to Washington DC to Jacksonville, I'd have to go from San Diego to Los Angeles to Chicago to Jacksonville.
Okay, it could've been better.
Without going into the gory details, I avoided getting snowed in at Dulles, as flights out of DC were being cancelled faster than the local television coverage of the Chargers home games (which is another story altogether). I ended up landing in Jacksonville Thurday morning, and made my way to St. Augustine.
Friday morning didn't begin nearly as early as my brother Greg and I had planned. We'd talked about leaving for Daytona by 7:30am, but that didn't happen. That didn't even come close to happening. We finally left St. Augustine by around 9:00am or so, and were parking the car in the infield at Daytona International Speedway by 10:00am. We had come for the 49th running of the Rolex 24 Hours at Daytona. 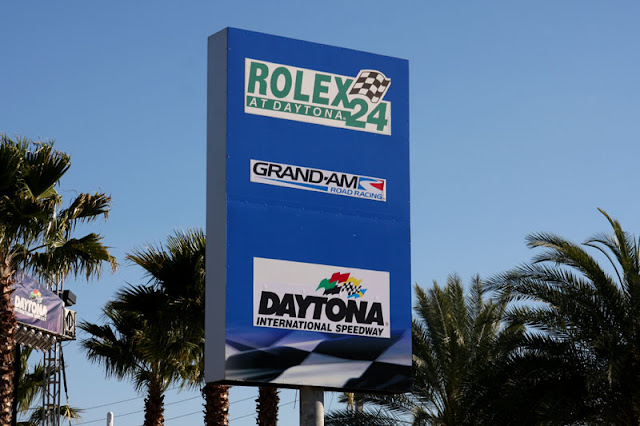 Now, I've watched countless televised races from Daytona. It's 2-1/2 mile tri-oval, and it doesn't take a car all that long to turn a lap when it's going 200 miles per hour. But this was completely unexpected. I was actually pretty awed by how big it was, and I was standing in the infield. It was pretty damn epic.
﻿
﻿

Our $85.00 tickets (hey, nobody said racing was cheap) got us not only into the infield, but also into the garage area. If you want to see how these race cars are worked on and put together, this is the place for you. Cars were in every state of disassembly, and watching someone take one apart and put it back together was actually kind of humbling. I can't even put an Ikea bookshelf together without detailed instructions written in four languages, and here these guys were tearing these cars apart and rebuilding them like they were playing with Legos.
﻿
﻿﻿
﻿﻿
﻿﻿
﻿

The first race of the weekend, on Friday, was the Continental 200. This wasn't the "big" race of the weekend; that would start on Saturday. Still, it was fun to watch cars that you would normally see on the freeway cruising around the road circuit within Daytona. 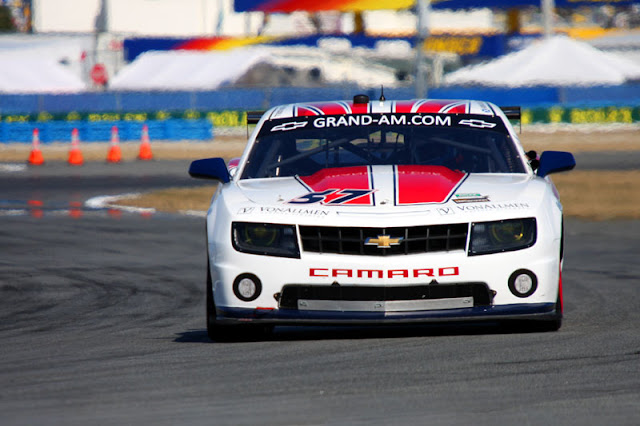 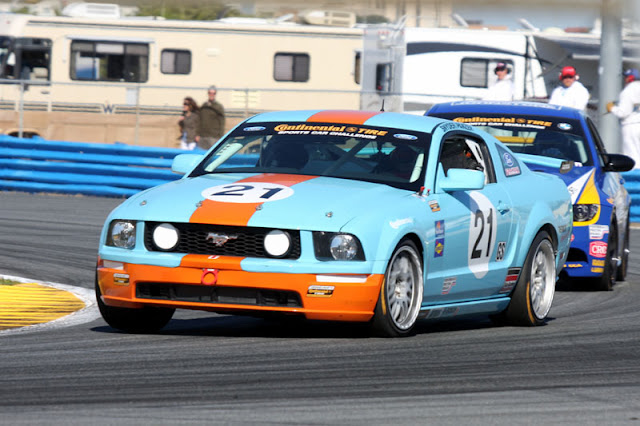 And, as good as some of these drivers are, all the preparation and hard work in the world cannot help them avoid what will eventually befall every driver at some point in his career, the "DNF", or "Did Not Finish".
﻿
﻿

After Friday was over at the track, we headed back to St. Augustine, only about an hour up the road. After downloading photos and recharging camera batteries, we found ourselves out and about in St. Augustine. It's a cool little city which also happens to be the oldest in the United States. We'd planned to go out for only a little while but, as will sometimes happen, we didn't get in until about 1:00am.
And we were getting up at 6:00am.
The second day started almost on time. We were pouring our first cups of coffee by 6:30am, and were headed out the door by 7:30am. We got to Daytona, found infield parking (which completely rocks), and got set for the day.
On Friday, I used, primarily, my Sigma 50-500mm lens. It's definitely got a focal length well suited for motorsports. For Saturday, though, my two main lenses would be the Sigma for daytime shooting, and the Canon 70-200mm f/2.8L. It's a nice fast lens which works well when the sun goes down.
The Rolex 24 is a pretty big deal. While I was pretty sure I wouldn't know the names of anyone involved in this race, I was surprised to learn that NASCAR great Jimmie Johnson, Indy 500 winner Dario Franchitti (Mr. Ashley Judd), and even actor Patrick Dempsey would be driving in the Rolex 24.
﻿
﻿ Being on the track that I've seen, coutless times on television, was, to be honest, pretty damn cool. As I've said, the entire place is bigger than I thought it would be. The stands are higher, the banks are steeper, and the track is wider. Simply put, there just wasn't a single thing about this place which wasn't cool.

The Rolex 24 at Daytona began promptly at 3:30pm on Saturday. As you might suspect, because you're quite astute and intelligent, it ended at 3:30pm on Sunday. While we didn't stay for the entire race (I was flying back to San Diego on Sunday morning), we did stick around long enough for me to shoot over 3,400 frames.
When the Rolex 24 started, the one thing which was first and foremost in my mind was "Damn; ear plugs". These cars are loud. I mean really loud. Let me spell it out for you: I left Daytona International Speedway Saturday night, and my ears finally stopped ringing around 9:30 on Tuesday morning. Yeah, no hearing damage there.
The second thing I thought was "Man, these cars are fast". Compared to the Continental 200, the cars in the Rolex 24 were a completely different breed. It was the difference between a varsity high school basball team and the San Francisco Giants.
There are two classes in the Rolex 24, and they start separately, but it doesn't take long before the Prototypes are mingling with the Porsches, Mazdas and BMW's. It made for some great shooting opportunities.﻿﻿﻿ 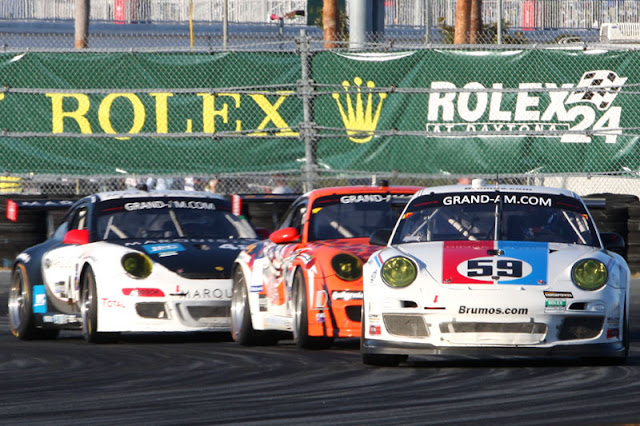 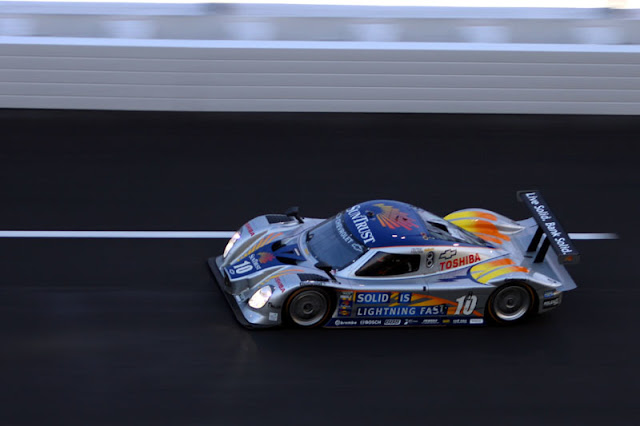 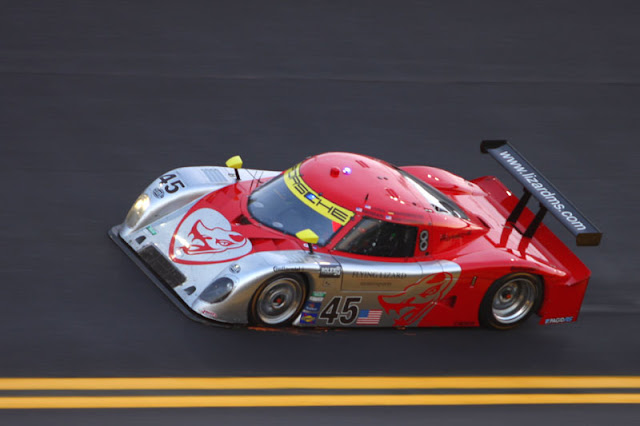 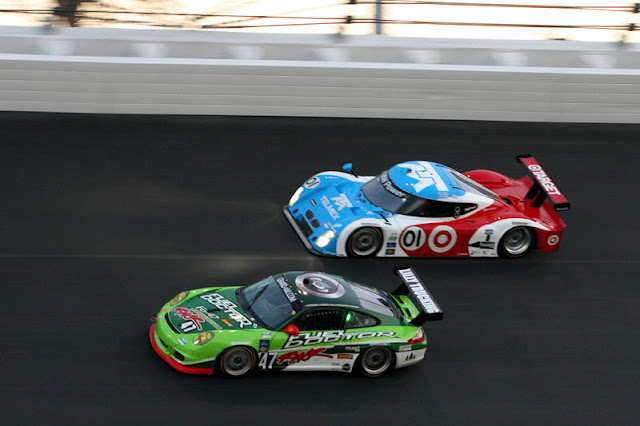 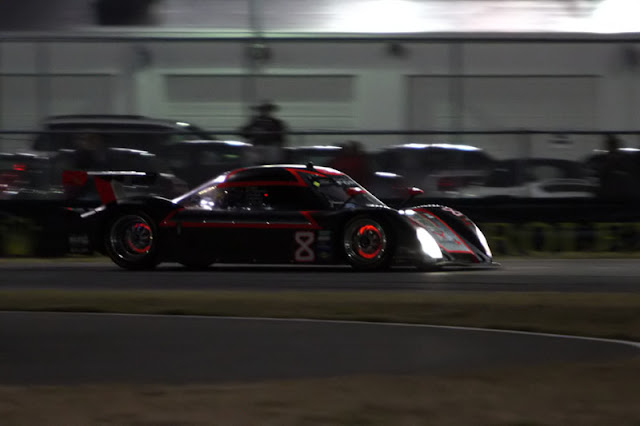 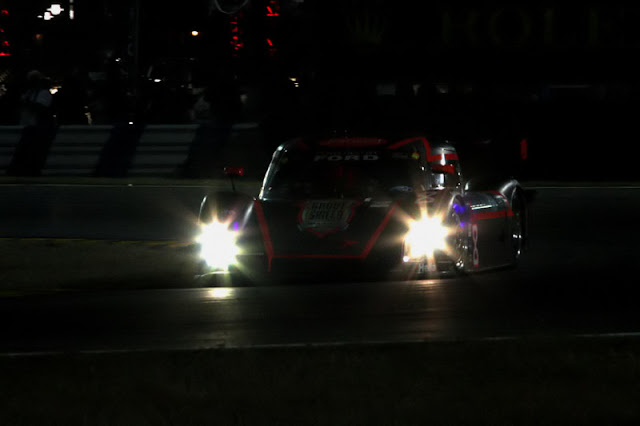 As great as it would've been to stay for the entire race, I had to be in Jacksonville, about an hour north of St. Augustine, by 9:30am on Sunday, so I had to settle for the photos I shot on Friday and Saturday. Again, though, there are over 3,000 of them, and I'm slowly accepting the harsh, yet somehow comforting, reality that I'll probably never actually see all of them. I just don't have that kinda' time.
So, this was my second foray into motorsports photography, and I'm diggin' it. I've no idea how many opportunities I'll get to do it, and I'm pretty sure that the majority of those shoots won't be with my brother, who I really enjoy shooting with.
This was one of those short vacations that, once you're there, it makes all of your jacked-up flights and potential cancellations worth the trip...
at February 04, 2011 No comments: