Mudflower Media owner Geoffrey Grider is, once again, proving that he's far from the stand-up businessman he'd like people to believe he is.

So, a while back I posted about one of my photos being stolen by Geoffrey Grider and Mudflower Media. Grider swore up and down that "no one stole anything" and that it was an honest mistake.

This morning, on Grider's uber-radically religious zealot nut-job, his-way-or-the-highway website "Now The End Begins", he allegedly pens an article about how the United States has been leading crippling airstrikes against ISIS since 2014.

Unfortunately, this otherwise fine article bears a striking resemblance to what is a Reuter's piece posted on moneycontrol . com. Given that he's already demonstrated a willingness to use and claim ownership of intellectual property that he did not create, the prudent person would seriously question the validity of his "By Geoffrey Grider" by-line.

Did Grider write the article? My opinion is that he did not. If he did, and his piece was picked up by Reuter's, that would be impressive. If he did not, however, it is a blatant example of plagiarism. I'm sure Reuter's will be quite interested to see Mr. Grider's website.

Compare the text and decide for yourself.

The first photo is the article Grider claims to have written, and the second is from the Reuter's piece on moneycontrol . com.

In another life, I worked at Taylor Guitars. I was the Canadian Sales Manager and, if I do say so myself, I was pretty damn good at my job.

At the end of every year I would write a synopsis; a "year in review" if you will, to keep the powers-that-be up to date on what had been accomplished as well as goals I was setting for the coming year. They were fun to write and, seeing as it was a guitar company (as opposed to, say, a faucet manufacturing facility), things were often offered and taken with a great deal of levity.

So, with that in mind, here I am looking back on this last year and what I've been able to accomplish. For the most part, things were pretty grand.

As in the previous couple of years, I started the year off shooting for Greek Yearbook. I've been with this company since the end of 2014 and I really couldn't be happier. Most of the photographers, I would think, have never met the staff at the home office in Hunt Valley, Maryland. Everything is done pretty remotely, and a person could easily do the job without ever meeting anyone from the home office. But my semi-frequent travels up to New York afford me the opportunity to stop in and see them, so I do. It's nice to catch up and talk face to face, make suggestions, etc. I consider myself fortunate to have found this company.

I continue to be the house photographer at the Ponte Vedra Concert Hall and the St. Augustine Amphitheater, although I've shot beyond those confines, as well. In April, I was honored to shoot the Rochester Music Hall Of Fame Inductions in Rochester, NY, which included performances by David Clayton Thomas of Blood, Sweat & Tears and Paul Shaffer of David Letterman's band (a career highlight for me!)

I've had the opportunity to photograph some of my idols (David Crosby comes to mind), but it's also nice to shoot when friends come to town (think Barenaked Ladies or Eric Johnson). In either case, I'm able to get knee-deep into the form of photography I enjoy the most, which is concert photography.

Another form of photography I absolutely love is racing. Being so close to Daytona International Speedway, it's easy to catch the Rolex 24 Hour Race in January or the motorcycle racing which takes place during Bike Week in March and Biketoberfest in October. NASCAR is ridiculously tough to get credentialed for, so I opt for these which, frankly, tend to be a lot more exciting.

2017 saw the start of my tattoo/photo project. It's an awful lot to get into, but suffice it to say I'm hoping to make a lot of money so I can give every nickel of it to a cancer research charity. Let's face it, cancer's an insidious bitch which doesn't give a rat's ass what color you are, whether you're gay or straight, skinny or fat, man or woman, or what your tax bracket is. It's taken far too many from us and what started out as a simple desire to photograph cool tattoos has morphed into a thing bigger than I'd imagined. If I have one resolution to carry into the new year, it will be to finish the tattoo project.

And, besides, tattoos are freakin' cool:

Finally, I'm starting year number four with St. Augustine Social magazine. Never in my wildest dreams did I think there would be someone out there who liked my work enough to put it into a regular publication. I started out as a photographer and quickly moved into being a regular columnist for the magazine. It blows my mind every time I think about it. The editors, owners and publishers of this magazine let me flex my creative muscle in every issue and I'm beyond thankful for that.

So, it's with no small degree of anticipation that I peer into 2018. The year 2017 brought both highs and lows, and I wouldn't change a thing. I'm not foolish enough to think I've not been blessed to do what I do. As I look at 2018, I see good things on the horizon, both professionally and personally, and I'm looking forward to every single one of them...

Mudflower Media, exploreoldcity.com, and Why You Should Avoid Them (a review)...

This concerns a local St. Augustine business, but they claim to have clients nationwide. It's my hope that this serves as important information for anyone, local or not, considering doing business with these companies.
An intern for exploreoldcity and Mudflower Media, Haley Ellison, wrote an online article about Culinary Outfitters on South Dixie Highway. The main photo in that piece was, she claimed, found in a Google search. This is the image as it appeared on exploreoldcity.com and their Facebook page on September 22, 2017. It remained there until December 1, 2017: 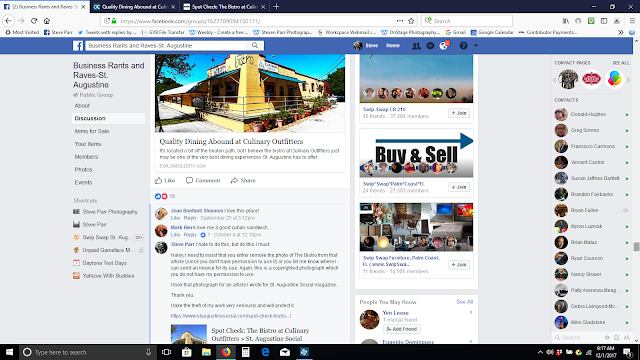 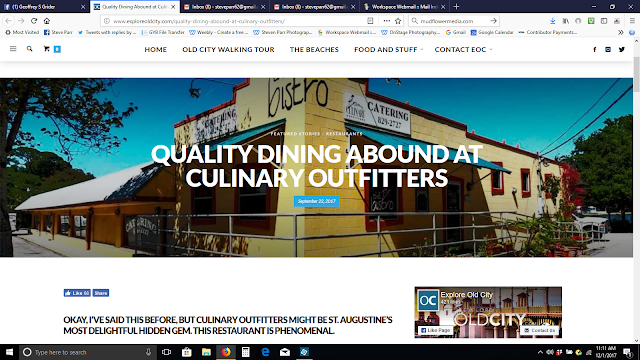 I was originally going to let this slide with my suggestion that they take the image down, but the CEO of the company decided to jump into the fray, so I edited my original post on their Facebook page, removing the option of taking the photo down as a way to correct this. Payment for use of the photo became the only avenue I would agree to. 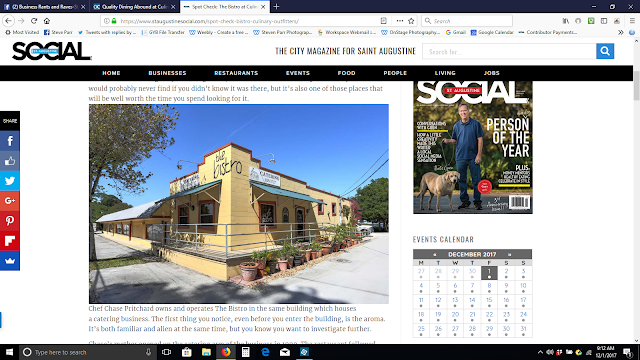 The source of the image is easily identifiable, yet no effort whatsoever was ever made to contact either me or St. Augustine Social for permission to use the image. They never even attempted to source the image, which is ridiculously simple on Google. When I posted about it on Facebook (under Miss Ellison's review), Mr. Geoffrey Grider, who owns exploreoldcity's parent company Mudflower Media, told me the image would be removed and to stop harassing his intern.
He never once apologized or acknowledged any wrongdoing.
I delivered an invoice to Mr. Grider's office while he was not there. He took to social media to take issue with the amount ($350). He told me to "keep dreaming". I stopped back by his office to discuss this with him, and he was immediately confrontational. He offered me $40, which is the amount Mr. Grider claims is charged by Getty Images to license a photograph. In actuality, Getty are expensive to license; usually around the $175 range but, in some cases, as high as $700.
Regardless, what I explained to Mr. Grider is that I'm not Getty Images. I'm not a stock photography agency, I'm a single photographer. I don't have an archive of 80 million photographs to license for $40 each. I don't know how many images they license every day, but I'm sure it amounts to an astronomical sum. Furthermore, if Mr. Grider wanted to pay $40, he should've gone through Getty Images to license the photo. Of course, that wouldn't be possible, since Getty doesn't have this image. But, for whatever reason, Mr. Grider believes I should be bound by a pricing structure that he incorrectly believes Getty Images has in place, for using a photo that Getty will never have.

Mr. Grider's brand of logic is fascinating.
Is the amount of $350 high? Well, if your name if Geoff Grider, yeah, I suppose it probably is. But it's not if you consider that this is how I earn my living, and I cannot allow copyright infringement, especially by a business owner who, by nature of his business should absolutely know better, to flourish.
I eventually countered his offer with an offer of $100 and he flatly refused.
His offer of $40 was an insult, but it also speaks loudly to the fact that he knows he was in the wrong. If he didn't believe he was in the wrong, he would've offered me nothing. When I told him his offer was an insult he said "Take me to court."
So, that's exactly what I intend to do.
I just think it's important that people understand that those who seem like stand-up businessmen (Mudflower was featured on First Coast News) are not, in some cases, stand up businessmen. Geoffrey Grider never once apologized for this, instead opting to insult me with a paltry licensing fee offer. Furthermore, he apparently sees nothing wrong with the conduct of his company, its subsidiary exploreoldcity, or his intern Haley Ellison.
I would also caution my photographer friends to regularly scan websites owned by Mr. Grider for instances of copyright infringement. He will allow your images to be used without attribution, compensation or permission. There are plenty of reputable, good businesses to work with in St. Augustine. Mudflower Media would not be one of those businesses.
And, yes, I have screen shots to support my allegations, and I will be presenting those, and other supporting documentation, in court.

It's disgusting that a supposed legitimate businessman would stoop to such lows. His sense of entitlement is through the roof and his inability to simply admit he and his company were in the wrong would've gone a long way in rectifying this situation.

Geoffrey Grider, however, has determined that this will go an entirely different route...
at December 01, 2017 1 comment: