What Your Mortality Has To Say About Those Plans You've Made...

Someone sent me an internet meme recently.

Now, of course, we all get these almost daily. Many are funny, many are stupid, but they're harmless enough that you usually forget about it within seconds of closing the e-mail.

This one I received recently, though, was not one of those memes. This one demanded that you think about its message: I sat and looked at that for a minute, and it reinforced the way I've decided to approach life.

In April, my ex-wife's brother John, to whom I had remained mildly close, died suddenly at the age of 49. He was a relatively healthy guy. He may have smoked an occasional cigarette and probably could've had a better diet, but he was in far better health and physical shape than I am. That notwithstanding, his life came to an end on the shitty end of a heart attack.

Just a few weeks ago, a friend of mine here in Florida; Russell, was found in his apartment. Now, Russell was known to have a drink now and again and he was a smoker. Still, like John, Russell suffered a heart attack that brought his life to a premature end. He was only 51.

I'm 54. I have a horrible diet. I could stand to lose a few pounds. While I no longer smoke, I did so for 35 years. I drink. I don't exercise. There's a litany of reasons why I'm a prime candidate for a premature demise, yet here I am.

Considering your own mortality sucks.

Nothing is guaranteed. John had great plans for his kids that will go unfulfilled. While Russell and I weren't close, he'd been bringing his life in line with a healthier lifestyle. What he'd planned for that healthier lifestyle I can only guess. The point, though, is that it doesn't actually matter at this point.

I used to be a big fan of plans. Let me make a plan and a list and, Goddammit, I'll rule the world. But that's not how life works. I've accepted that life doesn't give a damn about my "plans". What I want to do tomorrow or next week or next year matters not to life. It's going to throw what it wants at me and, when it finally decides to throw me my last breath, I want to go out knowing I didn't have "plans" that would forever go unfulfilled.


See, you're going to run out of time. At some point, your time will be up, and there won't be a damn thing you can do about it. The bitch of it is that you don't know when that time will come. It could come tomorrow or it could come ten years from now. But, when you think about everything you want to do, ask yourself: Do you think you've got the time?

I suppose it was bound to happen. I guess I just didn't want to wrap my head around the reality of it. I knew it would hurt. I knew there would be an inescapable sense of loss.

The Explorer is gone.

My 1999 Ford Explorer served me well. It got me from San Diego, California to to Portland, Oregon. Then, when it came time to leave Portland for the east coast, it became my refuge on wheels. For 5,800 miles over the course of 25 days, I was in that truck, having embarked on the trip of a lifetime. It was just me, with my camera in the passenger seat. It's the best goddamn thing I've ever done.

The reality of my situation, though, is such that I do a lot of driving, and the Explorer just wasn't the most fuel efficient vehicle on the road. At only 17 mpg, I was driving away a significant percentage of my profits, especially if I was driving to USC in South Carolina or Florida State in Tallahassee. I had to bite the bullet.

So, the Explorer is gone; sold to a young family who needs it for piddling around town as opposed to making protracted road trips. In its stead is a 2013 Nissan Altima: 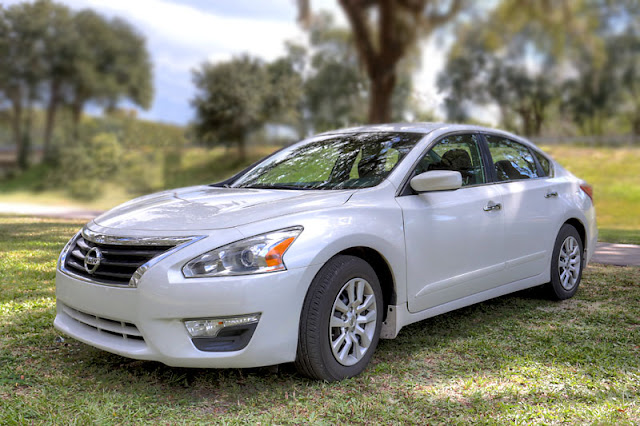 I'll miss that truck, to be completely honest with you.

I'm going to leave the photo of the truck on the beach at the top for a while; at least until I get a more appropriate photo of the new ride (which, by the way, averages 38mpg).