My final stop on this trip would end up being Frederick, Maryland. I'd be spending a couple of days with my buddy Mark and his family.

The drive from Long Island started out pretty good. There wasn't a great deal of traffic on the Long Island Expressway until I was close to the city. Now, I have to believe there was an easier way, but my Garmin GPS, for whatever reason, decided I needed to go through the Midtown Tunnel which, unfortunately, meant that I got to drive through the city to get to it.

Now, it could've been a quicker drive, but two things played a major role in slowing my progress into New Jersey and points south. First, there's ever-present construction. GPS will take you to make a left, the road will be closed and you'll have to take a detour. Unfortunately, many of the construction detours are poorly marked and GPS doesn't take detours into account.

What a fun time.

The other thing that impacted the drive through the city was the fact that President Trump was attending an event on board the Intrepid, so cops were everywhere. Somehow, I managed to get to the tunnel and move along my way:

The rest of the drive was great. Mark recommended a different route, once I'd gotten into New Jersey, than the one I'd originally planned and, to be honest, it was a lot nicer.

This leg of the trip was pretty much all relaxation, although I did meet some folks that I shoot for out of Hunt Valley, Maryland. We talked some business, threw back a few beers and just enjoyed hanging out.

Sunday would have me back on the road to Florida, and I was certainly ready. I love traveling, but I also love getting home, too...
at May 17, 2017 2 comments:

I always love getting back to Long Island.

Along with the fact that there's no better pizza on the planet, or better bagels, the fact remains that I have a few very dear friends on the Island that I just can't see enough.

The drive from Rochester wasn't bad. I stopped for some gas, got some coffee and hit the road. Now, for a moment, let's talk about that coffee. In another life, I traveled extensively throughout Canada. Hell, I'm pretty confident I've seen more of Canada than most Canadians. One of the best things about Canada, being a coffee drinker, was Tim Horton's. "Timmy's" is like the Dunkin' Donuts of Canada. Well, after I got gas I looked for a place to get a cup of coffee (I wasn't diggin' the gas station coffee). You can, I'm sure, imagine my amazement when I discovered that Tim Horton's has come south of the border. 'Tis a good day that starts out right, and then day couldn't have started out any better.


The weather was less than perfect. It had rained overnight, so the roads were wet and slick. It was still drizzling a bit, but at least it wasn't the torrential rain which we'd apparently had overnight (I'm not a huge fan of driving in hard rain).

I pointed the car south and pressed the gas.

The drive was pretty uneventful until I started getting close to New York City. People in places like Atlanta and Los Angeles like to bitch about their traffic but, when all is said and done, there's nothing like a good New York traffic jam. The bad part, though, is that a traffic jam in New York can stretch from the Bronx to Hauppauge, 50 miles to the east on Long Island.

One thing I always like to do when I'm on the Island is drive past the old homestead. Oddly, the house seems smaller now. At one time (long after Mom sold it) it had fallen into a state of disrepair which was sad to see. Whoever owns it now, though, has done a real nice job of making repairs and cleaning the place up. Most interesting to me, though, is that there were two huge pine trees in the front yard. Today, there's but one.


The best part of this house, for me, was the front porch. We were famous for having friends over on a rainy weekend afternoon, guitars and beers in hand, jamming on the front porch. No huge, legendary parties. Just good times with good friends.

I found my way to my friend Eileen's house. I have three truly dear friends in this world who I would literally do anything for, and Eileen's one of them. She graciously opens her home and puts up with me every time I visit Long Island. She's a pretty damn good cook, too, so  there's that. Her grilled salmon is pretty legendary and is, by a very wide margin, the best I've ever had.

My stay on Long Island was as relaxing as I'd hoped it would be. Rochester was a whirlwind; something going on every day (not that I'm complaining). I was able to relax, see some old friends and I even got to do a couple of tattoo shoots with an old high school friend and her daughter and make the obligatory stop at the Palace Diner. Eileen made dinner for her and I and our friend Patty, as well.


As is so often the case, my visit to Long Island was over way too soon. I expected that, though. It doesn't matter if I stay two days or two weeks, when I'm on the Island I always find myself wishing I'd had another day or two.

My trip wasn't over yet, however, so goodbyes were said and I found myself back on the road, headed south.

Of course, the major event happening in Rochester this weekend was the 2017 Rochester Music Hall Of Fame Induction Ceremony. Now, to be completely honest, I thought it might be a bit hokey, but it's actually a pretty big deal. Held in Kodak Hall in the Eastman Theater (at the Eastman School of Music), the hall was sold out and Rochester's musical luminaries were in attendance.

I was fortunate to be able to avail myself of the dressing room for Gary Lewis & The Playboys (my buddy Mike is his guitarist), so I wasn't really going to have to worry about where to stash my stuff during the show.

The ceremony, and specifically the musical performances, was absolutely fantastic, and I feel honored and humbled that I was asked to shoot it. 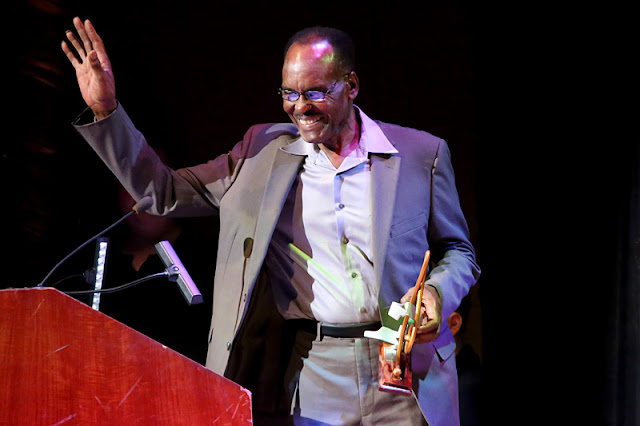 This was the first time I've ever photographed an event like this. It was a combination of concert, awards show and Broadway production. The people who put this thing together accepted a monumental task requiring Herculean efforts by all, and they pulled it off flawlessly...

Following the Hall of Fame rehearsals, we had to get back to Mike's house to get ready for the CD release for his band's new album, taking place at Record Archive in Rochester. Junkyard Fieldtrip is Mike Gladstone (guitar, vocals), Rob Smith (guitar, vocals), Don Torpy (bass guitar) and Emmett Ientilucci (drums, percussion, vocals).

Mike had sent me a pre-mastered version of the CD which made its way into regular rotation in my car stereo. Once I got to Mike's house, though, he sat me down in his studio and had me listen to the entire mastered disc, and I was pretty blown away. I knew it would be a hit at the release party. Mike was expecting somewhere in the neighborhood of 200 people. If I were to guess, there may have been half again as many people once the band started playing.

The band Woody Dodge, which includes my buddy Jon Gary on bass (Mike Gladstone's an alumni, as well) opened the show and, although the room was already crowded, people continued to stream in during their set. 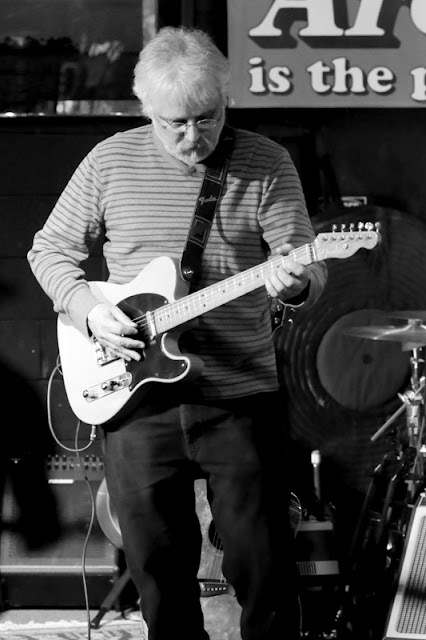 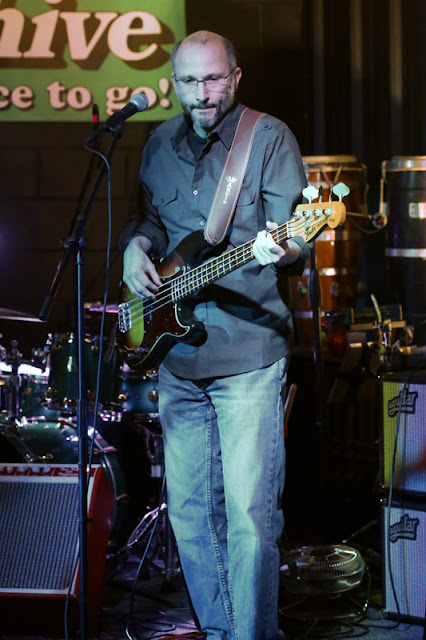 Not long after Woody Dodge wrapped their set, "JYFT" was on stage and ready to go. 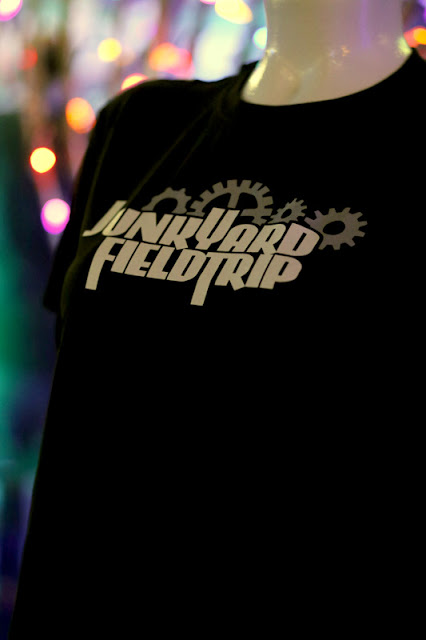 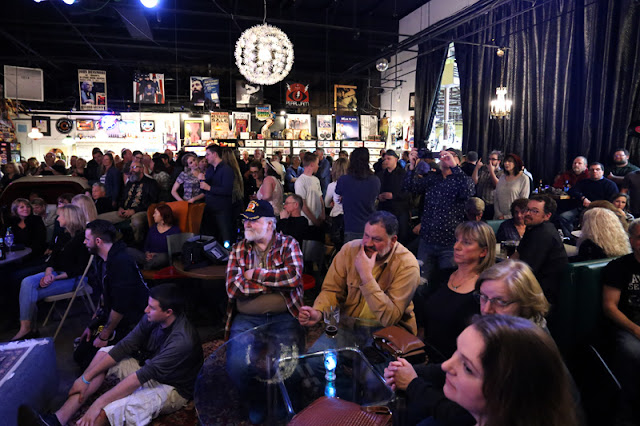 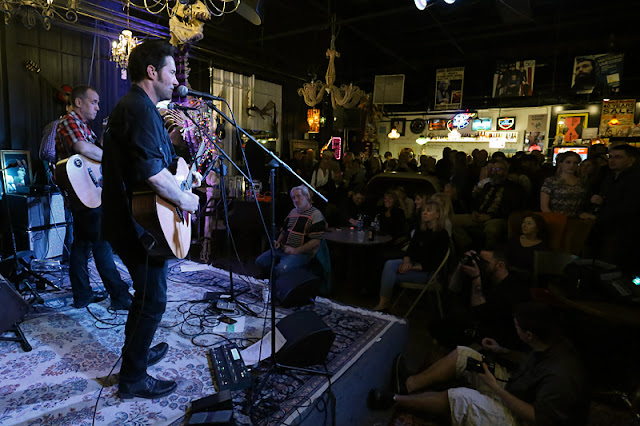 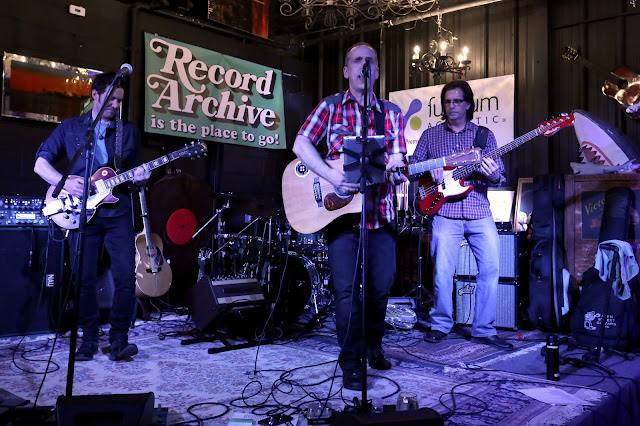 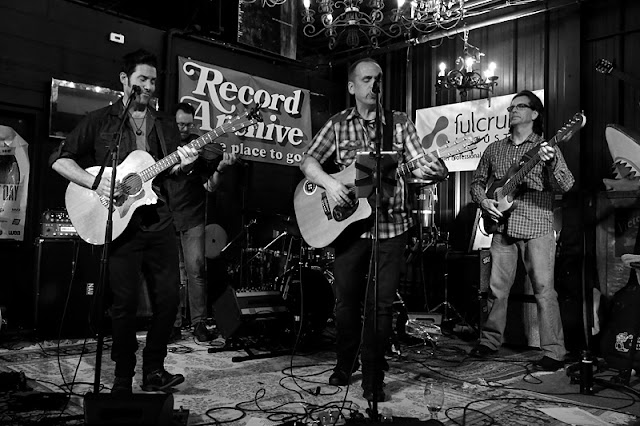 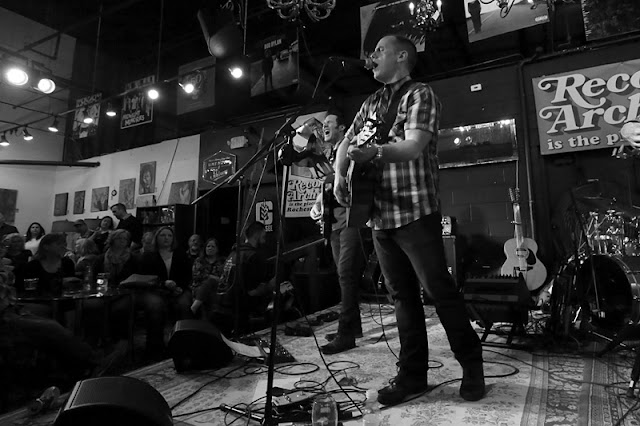 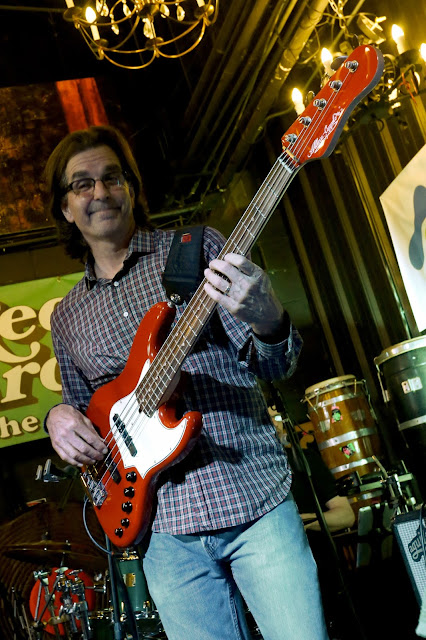 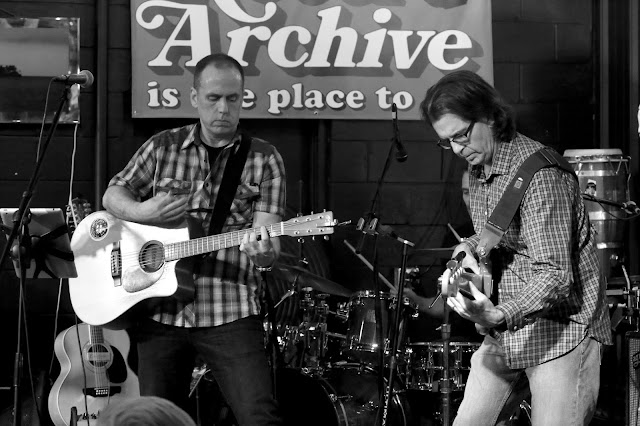 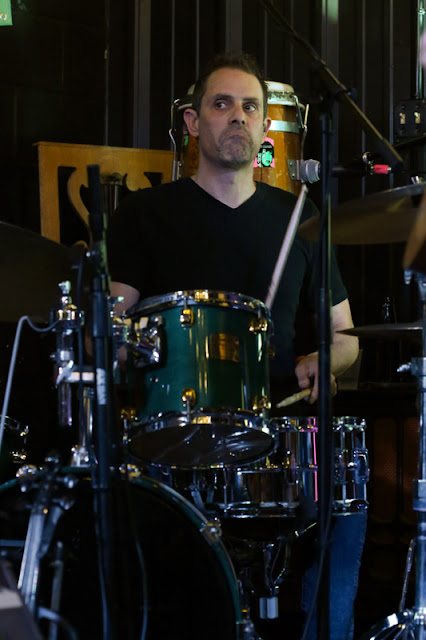 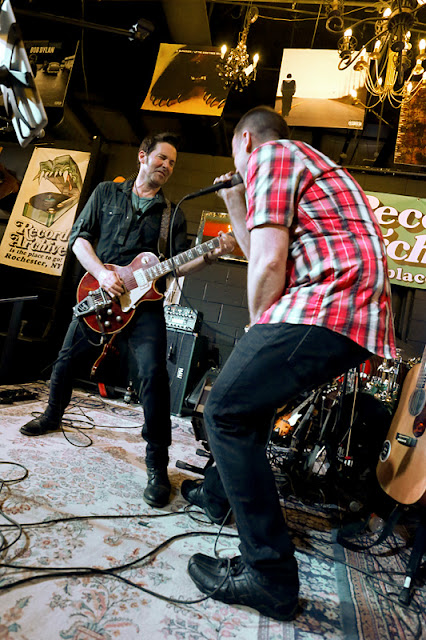 The event was an unqualified success, and that was great to see. Countless people stayed after the show to talk to the band or to have them sign a CD (of which many were sold that night). If you're at all interested, you can get the CD on Amazon. Pretty sure you can get it at Reverb Nation, as well.

Rochester is always fun. I've been here a number of times and I've enjoyed every single visit. Past visits, though, had been filled with a lot of mindless this and that and nothing of too much importance.

Friday night would include a trip to Dinosaur Bar-B-Que. I'd eaten here once before, while on a business trip in 2011, and it was pretty damn amazing back then. A complete lack of parking anywhere near the place told me that hadn't changed. My buddy Jon and I found a parking garage and made the trek to the restaurant. 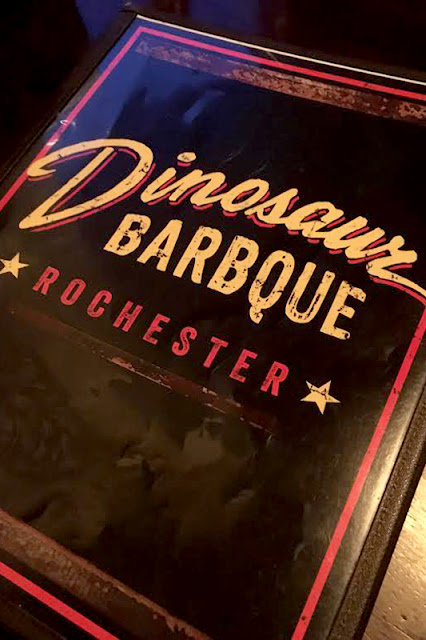 It was early Saturday when Mike and I found ourselves heading over to the Rock Shrimp Company, formerly Nola's BBQ. There would be no shrimp or BBQ served here this morning. Instead, there would be only coffee and donuts for the cast of ridiculously talented musicians who were here to rehearse for the Rochester Music Hall of Fame inductions. 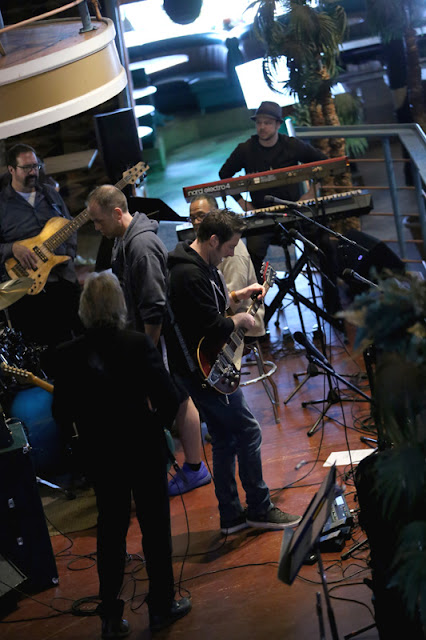 It was amazing to see and hear such a gathering of some of the finest musicians you're likely to find anywhere. Their rehearsal sounded better than the performances of most bands you'll find. 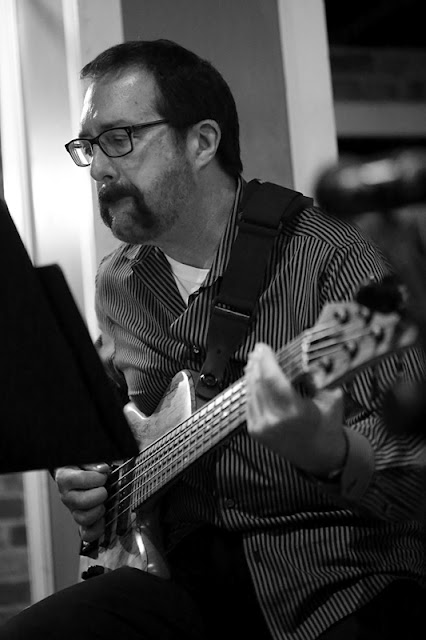 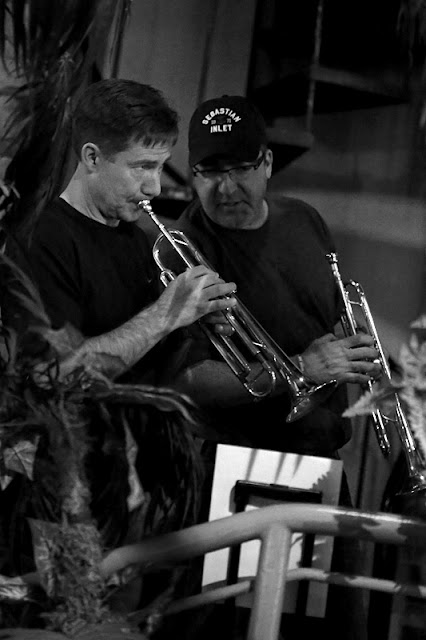 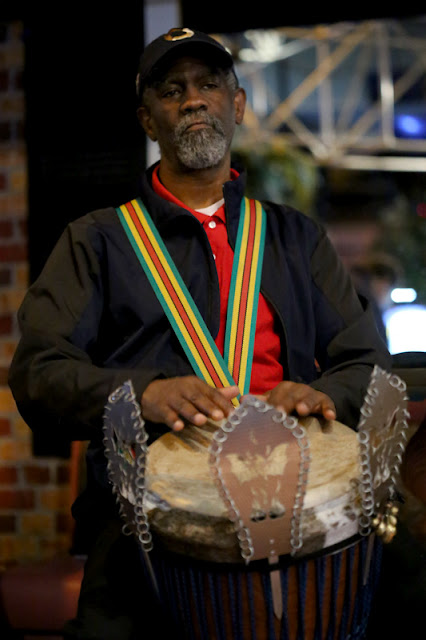 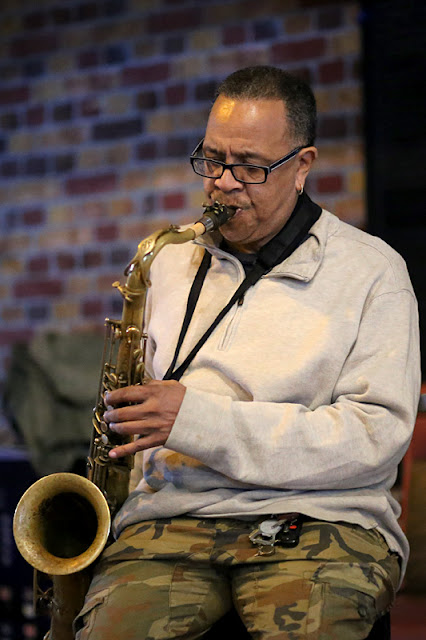 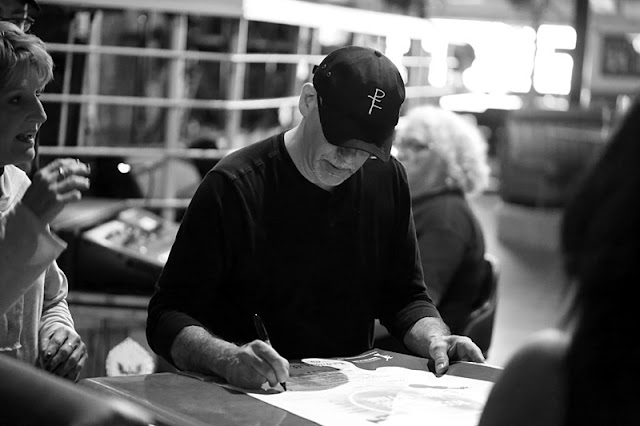 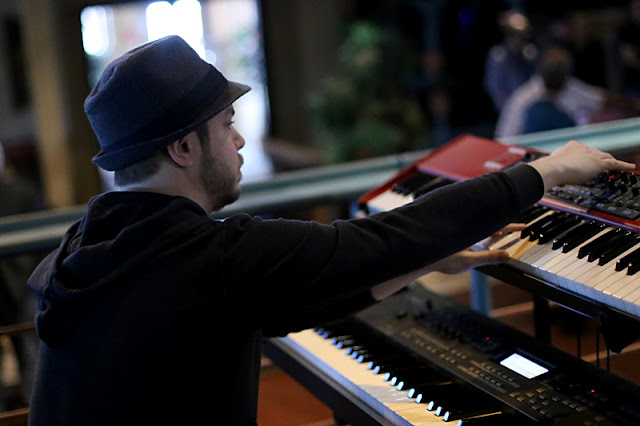 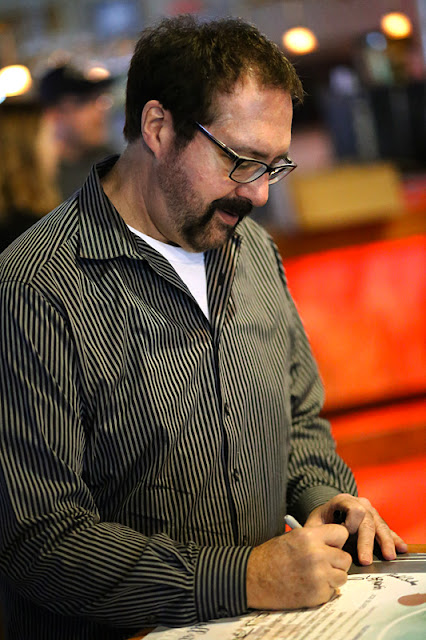 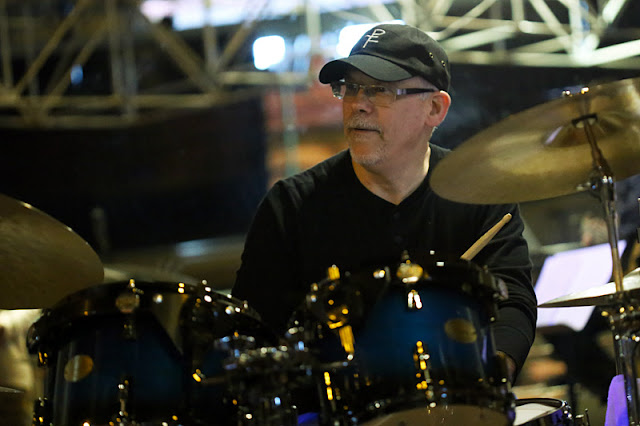 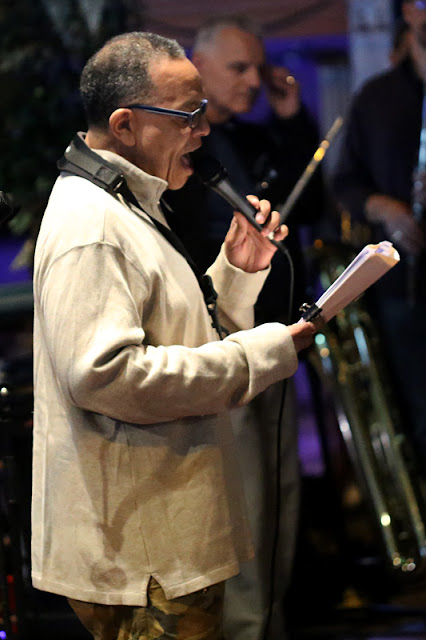 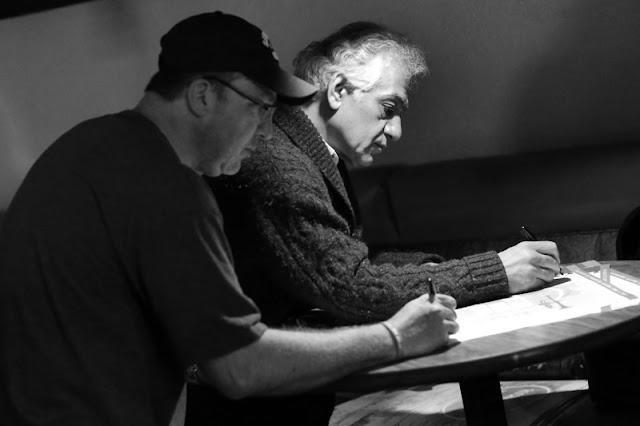 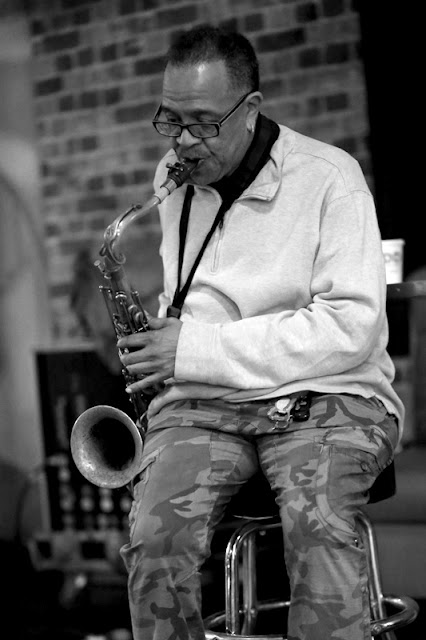 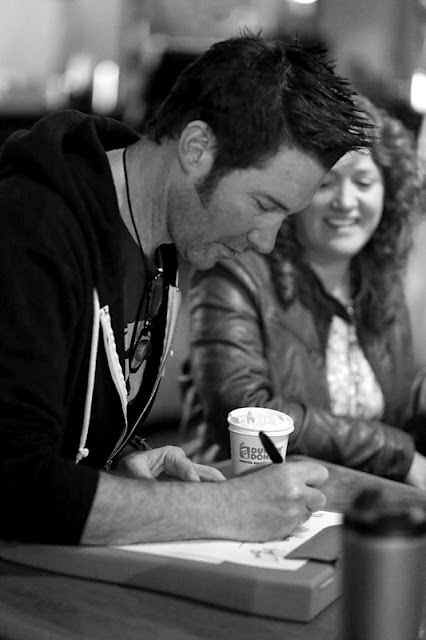 We left rehearsals around 1:30pm. There was another event of note which was taking place later in the day and we needed to get to it...
at May 11, 2017 No comments: