Simply stated, there's no finer place on the planet than New York City. If I could live anywhere, and money wasn't a factor, drop my ass in the middle of Manhattan and leave me be. I'll be fine.

I try to get up here once a year. Last year, I came up for a Mets game (my first at Citi Field). The whole point of this trip was to go to the Carnegie Deli in New York City. They're closing on New Year's Eve and, dammit, I wanted one more pastrami on rye.

The trip into the city would be made with two of my oldest, dearest friends, Patty and Eileen. We've been friends since high school, and I think I would be hard-pressed to find two people I would rather run amok in New York City with. We'd long decided that we would go into the city on the Tuesday I was on Long Island. We got lucky with the weather. It was cold, but clear.

We got on the train out of Central Islip at about 9:30am. There was some delay, but nothing to horrible and certainly nothing that was going to put a crimp in our day. 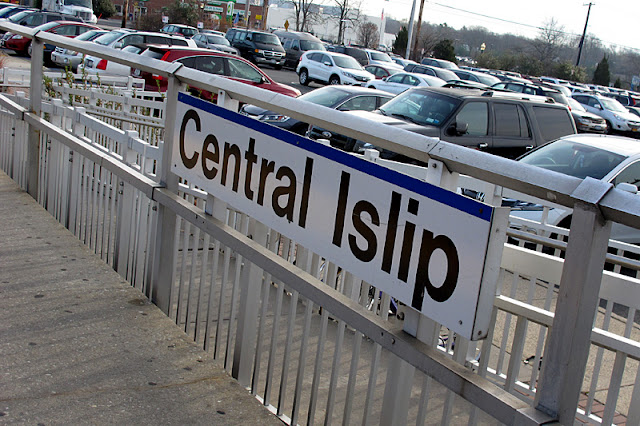 We made it into Penn Station a little after 10:30am. It's always surprised me how busy this place is all day long. 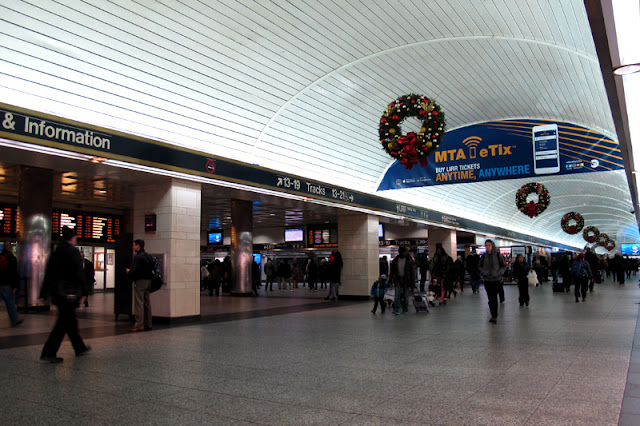 Now, when I go to New York City, there are those things which let me know that I am, in fact, in the greatest city in the world. One of those things is the venerable Madison Square Garden. I can't imagine going anywhere in the world and finding too many buildings which have a more recognizable name. As you come up from the subterranean Penn Station, it's right there:

Our first stop was all for me: B&H Photo on 9th Avenue. The place is absolutely enormous and carries, quite literally, anything that any professional or amateur photographer could ever want. If you ever fine yourself in New York City and you happen to be a photographer, it's worth the visit, even if you don't buy anything, just to check out the conveyor system they have.

After B&H, we started to make our way up to midtown and the Carnegie Deli. This was, after all, the entire reason I decided to make this trip. The walk wasn't bad at all, despite the temperature being in the low 40's (and it might as well been 10 degrees below, amIright?). It wasn't long before we found ourselves in the middle of Times Square:


We made our way from Times Square over to 7th Avenue, turned left and, before we knew it, we'd made it to the Carnegie Deli.

Or, more accurately, we made it to the line of people who were waiting to get into the Carnegie Deli:

You know, it's a funny thing. When you're moving along in sub-arctic temperatures, you really don't get cold. Your blood is flowing and you're getting some exercise and, well, everything is grand. It's when you stop moving that you begin to question the wisdom of waiting on line, outside, to do anything. It's even more insane to wait outside in such temperatures, to do anything, for an hour and 45 minutes.

But that's what we did.

Our perseverance was rewarded, though, when we were finally seated.The Carnegie Deli is a lot smaller than I remembered, but the experience was exactly the same:

Our server, a lovely older lady named Desmarine, came over and took our orders. Of course, we all went for the pastrami on rye which contains over a pound of pastrami. Patty and Eileen opted to split a sandwich and, considering the size of these things, that probably wasn't a bad idea. I had no one to split mine with and, even if I did, I wouldn't have. This sandwich, after all, was the reason I came to New York in the first place and, goddammit, this was mine:


I'm not generally known to be a man of any deep faith, but things like this have to, at the very least, make you allow for the possibility that there really is a God and that he wants us to be happy. He wants us to be really, really happy:

With our meal completed and the bill paid, we decided to start making our way downtown. We made it as far as Rosie O'Grady's on 7th, where we stopped for a little bit of warming therapy:

While we were enjoying our first cocktails of the day, there was a bit of a commotion outside. A number of police vehicles streamed past the bar, some of which stopped to block traffic. As we weren't that far from 5th Avenue, our first thought was that it was Donald Trump's motorcade. In fact, it was the motorcade of Vice President Joe Biden, who was to appear on The Late Show with Steven Colbert.

We worked our way down 5th Avenue until we came upon St. Patrick's Cathedral. There aren't too many more iconic sites in New York, so we decided to stop. I've been in some amazing churches and cathedrals in my time, but never St. Patrick's. That would change today:

After St. Patrick's, I had another "first" on my list. I'd never seen the Christmas tree at Rockefeller Center. That, too, would change today.

We slowly found ourselves back on 5th Avenue, where we decided to check out the windows of Saks 5th Avenue. Window dressing takes on a whole new meaning in New York, and Saks offers an amazing example of it: 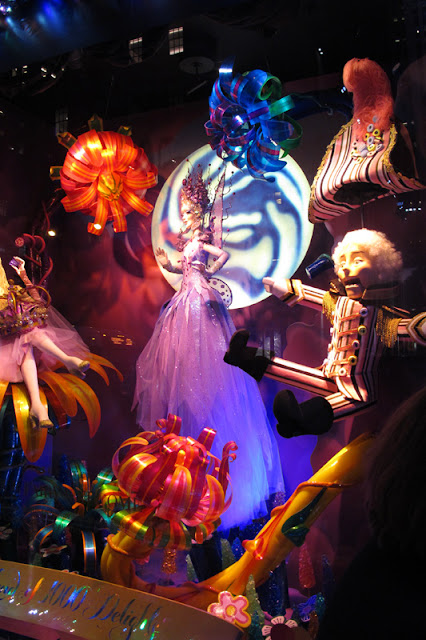 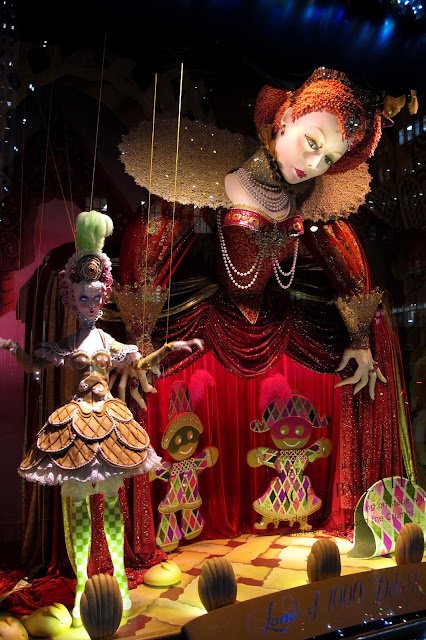 And, as if that wasn't enough, there was also a Trans-Siberian-esque lighting/music display on the side of the building, right on 5th Avenue (apologies for the sketchy focus):

After Saks, we decided we wanted to make our way down to the East Village to check out "Beetle House NYC", which is a Tim Burton themed bar. It was down on East 6th Street so, coming from 51st Street it took a little while. But it was worth the ride and the $18.00 cab fare, especially considering that it was dipping into the high 30's and was starting to rain a bit.

These are true craft cocktails here, and I'm pretty sure I'm stealing one of them and making it my own. It's one of the tastiest cocktails I've ever had. And, no, I'm not going to say what's in it.

Despite the fun we were having at Beetle House, we hadn't had dinner yet and we still had to catch the train back to Long Island. So, we said our goodbyes to Sweeney Todd and Eddie and quickly got a cab. Our destination? Five Napkin Burger on 14th Street. We'd passed this enticing burger joint on the way to the East Village, and I'm pretty sure it was nothing more than the name which convinced us to go. We got out of the cab and darted across the street, into the waiting confines of yummy, beefy goodness.

I got the cheddar & bacon burger with a black & white malt. Sweet mother of everything holy these were good. Five napkins? That's actually a bit optimistic:

Looking down at my watch, I was both surprised at how late it was and by how quickly the day had flown by. We'd done a lot on this day, and there were probably a dozen more things we'd have done if we'd had the time. Such is the nature of New York City. We grabbed a cab back to Penn Station, got on our train after a short wait, and made our way back to the Island.

It was with a bit of sadness that I recently heard that the Carnegie Deli; that iconic fixture on Manhattan's 7th Avenue, which has played host to countless celebrities, political figures and other assorted luminaries, would be closing its doors on December 31, 2016. I'd been there a few times as a kid and always loved the ridiculously huge sandwiches they served.

And I wanted one more.

So, after talking to some Long Island friends, I decided to make a pilgrimage to the big city. I decided I would, one last time, enjoy what is truly a culinary masterpiece.

I scored a ridiculously low airfare (which I jumped on) and flew from Jacksonville on December 3. Now, admittedly, it had been some time since I'd been on a place. I last flew in October of 2012 when I went to Portland, Oregon to scope out the area prior to accepting a job there. I was pleasantly surprised to learn that, since then, someone finally decided that it was okay for me to leave my laptop in its bag and that my shoes could remain on my feet.

I've flown out of Jacksonville International only three times, and I always get a kick out of the different displays they put up. Since I would be flying close to the holidays, I guess it comes as no surprise that there would be a sleigh. Only this had a decidedly Floridian twist. You see, the sleigh on display was being pulled by eight porpoise:

And, as if a sleigh pulled by eight porpoise wasn't enough, how about a Maserati? I'm not sure why it was here; it's not like there were a bunch of them on display. Then again, at $92,000, I guess they really need to sell only one:

My flight to New York was uneventful (isn't that the best way?) and I was collected at Kennedy Airport by my friend Patty. As it wasn't that late, and I hadn't yet eaten, we decided it that we'd get some dinner. If you ever find yourself driving around Long Island at 9:30 at night and you want some dinner, might I suggest breakfast at the Hauppauge Palace Diner:

The next week promised to be a blur, so we called it a night after we ate and headed back to Patty & Chris' house.