Maybe it was destined to be this way, but our final day in Ireland was, by a wide margin, the best day of our entire vacation. We decided to take a tour to Malahide Castle (or Caisleán Mhullach Íde in Irish)  and the fishing village of Howth.

Malahide Castle dates back to the year 1185, and it was inhabited by one family, the Talbots,  through 1976. The only exception was the 11 year period from 1649-1660, when Oliver Cromwell granted it to Miles Corbett after the Cromwellian conquest of Ireland. Corbet was hanged after the death of Cromwell and the castle was restored to the Talbots.

From the outside, it's very much what you would expect a castle to look like. The towers, however, weren't added until 1765.


Malahide Castle even has (had?) its own abbey. It stands in ruins today, but at one time served as the family church, and the abbey grounds contain the Talbot family tomb.


Once inside the castle, you begin to sense just how old the structure is. While it's clear there have been modern improvements (lights, alarms, etc), it's still unmistakably ancient.

The only way to tour the castle was with a guide, and that was just fine with us. We would've been left wondering what this room was or where that corridor led. And, while many of the rooms were extraordinarily grand in scale, many were quite conservative in their size.


The castle remained under the ownership of the Talbot's until 1976 when Rose Talbot, after inheriting the castle and the estate from her brother, the 7th Baron Talbot, sold the castle to the Irish state, primarily to fund the payment of inheritance taxes.

The tour through the castle, which is reportedly quite haunted, is well worth the time and money. Don't forget to visit the walled garden and the butterfly house while you're there, too.

After Malahide Castle, we were off to the fishing village of Howth.

The village of Howth is less than 10 miles from the bustling downtown streets of Dublin, but it's a world away in terms of what it is. Howth is a quaint village lined with restaurants, small shops and even an Irish Coast Guard Station (oddly enough, I didn't see any Coast Guard boats). Fishing boats of all shape and size line the quay, some unloading their catch while others were preparing to leave, or on their way out of, the harbor. U2 drummer Larry Mullen also lives in Howth.


The tour company offered a walking tour of Howth, and we were surprised to learn that we were the only three people who signed up for it. Our guide, Conor Heggarty, was kind enough to make  accommodations and tailor his tour around  the fact that Mom's not as mobile as she used to be.


Following Howth Castle, Conor wanted us to get a nice "bird's eye" view of Howth. Well, you can't get such a view from sea level. Mom decided to sit this one out, because Conor would soon be leading us on climb (well, okay, an inclined walk) up a mountain to some cliffs which overlooked the village.

During the climb, we came upon a rock formation known as Aideen's Grave. Aideen’s Grave is a portal tomb. Aideen was said to be the wife of Oscar, who died at the battle of Gabhra around the year 285.  When Aideen learned of Oscar’s death, she collapsed and died of her grief.   Oisin, who was Oscar’s father, had her buried at Howth and had the portal tomb built in her memory.  These types of burials were normally reserved for great warriors or kings.


The tomb is partially collapsed, with the capstone fallen backwards, but the portal stones still stand and you can see what it would have been like.

About halfway through the climb my knees started screaming, and I thought about bailing. But I stuck it out and I'm glad I did. The view from atop the cliffs was amazing. 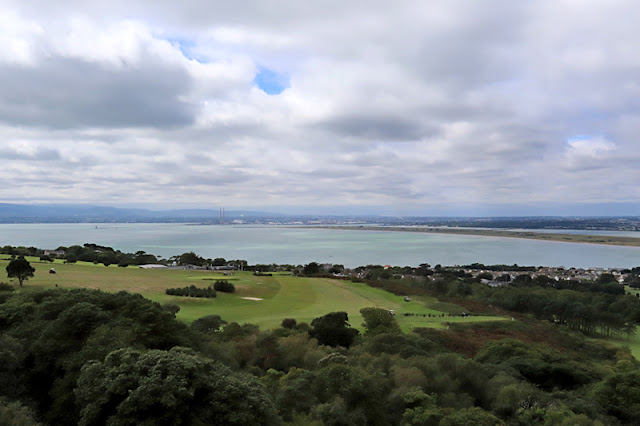 Of course, what goes up must come down, so after spending about a half hour atop the cliffs, we started our trek back down. Walking down is only marginally easier than the climb up, but it went without incident and my knees certainly appreciated it.

Following the cliffs, we headed out to0 other, less lofty, sights. Our first stop was St. Mary's Abbey in Howth. The original structure was built in the year 1042, but the church was rebuilt or modified through the late 16th century.


There are some graves from "recent" burials (within, say, the last 50-100 years), but certainly there are some ancient graves, as well. One of the more notable is that of Thomas St. Lawrence, the 13th Baron Howth. At his internment in 1727, he was eulogized:


"Behold this stone whose vault contains

For honour's sake then shed a tear

Since honour's self lies buried here"

It's easy to see that ol' Tom was held in somewhat high regard.

For the photographer in me, St. Mary's Abbey offered up a target rich environment. I think my blood starts flowing a little faster any time I come across a place like St. Mary's. 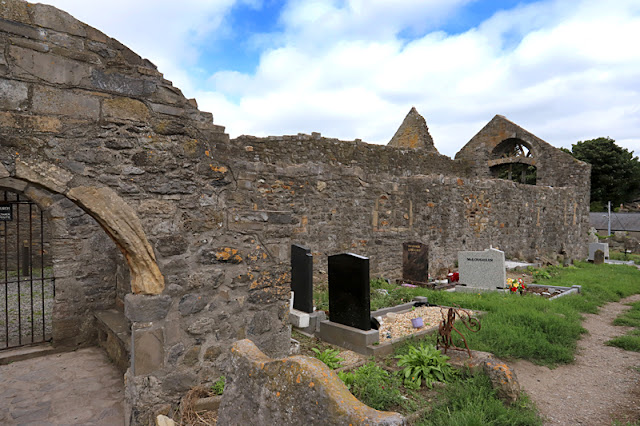 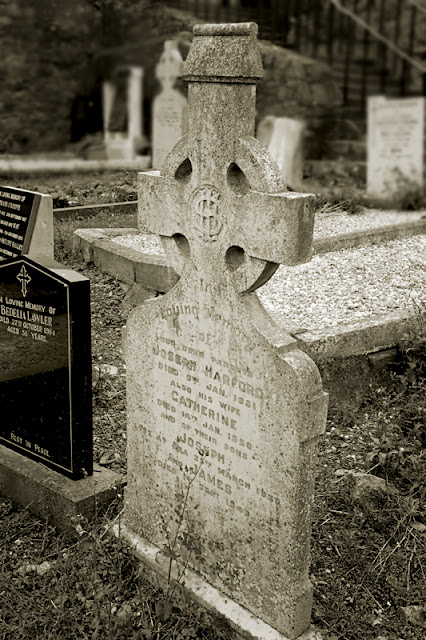 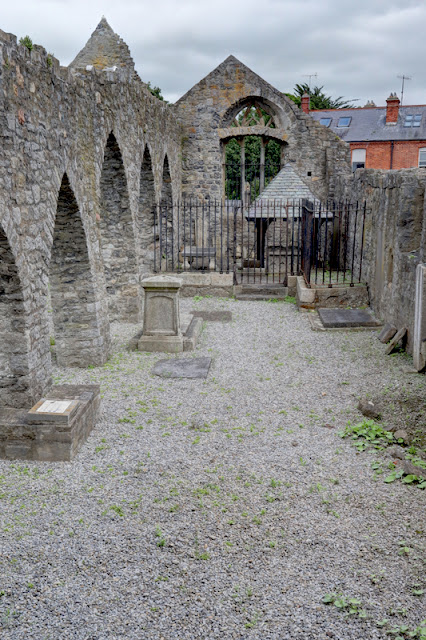 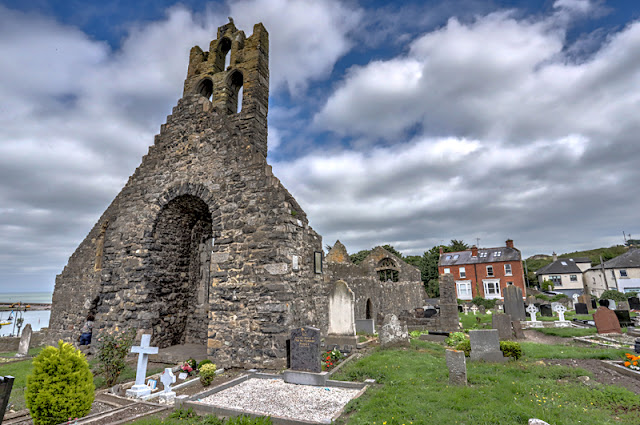 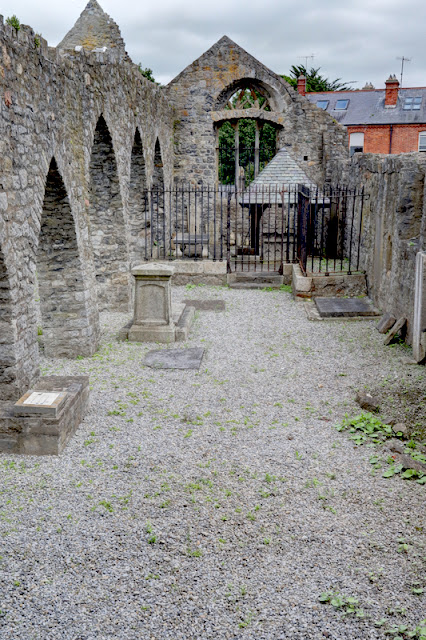 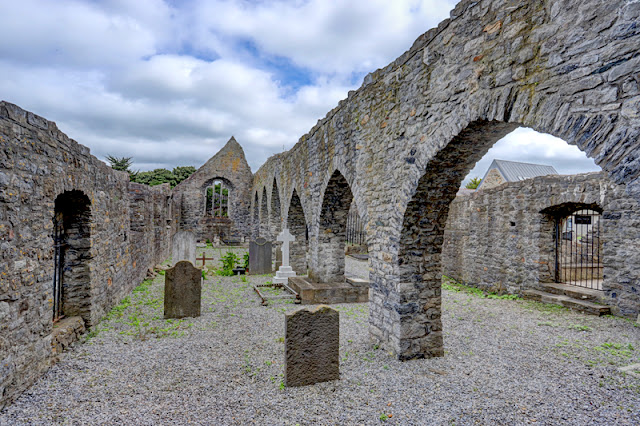 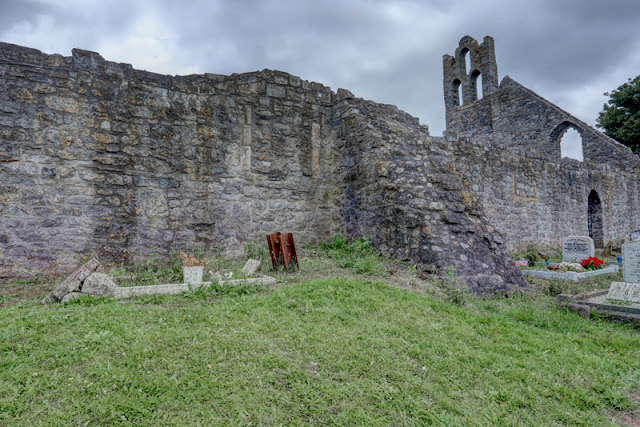 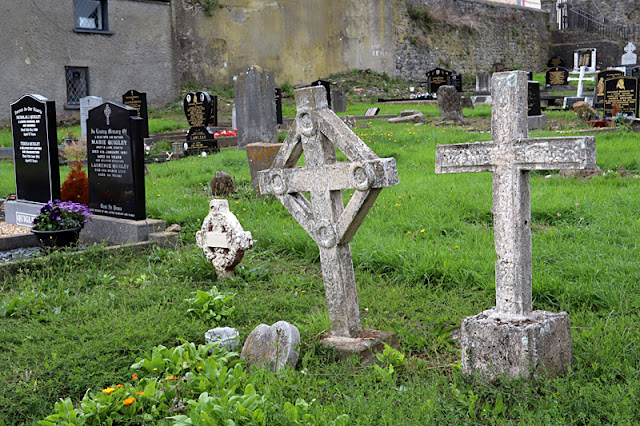 This final day, as I mentioned earlier, was by far the high point of our entire week long trip to the Emerald Isle. Not only did we see an incredibly varied selection of sites, we also were given an amazing history lesson by our guide in Howth, Conor Heggarty. He was an absolute joy to have as our guide and is a sure feather in the cap of Shane's Howth  Hikes, the company he represents. Even though we needed to massage the walking tour a bit, he made sure it was done both comfortably and professionally, and we were in his debt. My next trip to Ireland (and there will be a be a next trip) will include me buying him a Guinness.

You know, living in St. Augustine, Florida comes with its own sense of history. It is, after all, the oldest city in the United States. But when you come to a place like Ireland, you start to realize how, even after 453 years, St. Augustine is a relative child in the arena of historical cities. Walking the streets of Ireland and visiting its ancient ruins shines a brand new light on things when it comes to history.

And, when you think about it, there are a lot of places which do just that.