Almost on a whim I decided to make the drive from St. Augustine, Florida to Rochester, New York. It would give me an opportunity to give get into some of my passions: driving and photography.

I hit the road around 11:30am and headed north. About two hours north of Charlotte, North Carolina I started to hit a wall. I found myself wishing I could just doze off. This may have been because I was being lulled into unconsciousness by the traffic around Charlotte. It was horrible and easily added a half hour to the drive. After getting past the city I started to feel pretty good, and elected to keep driving. After about another three hours I was starting to fade. Fast. The problem was that all I wanted was one of those uber-cheap roadside hotels but found none.

At around 10:30pm I pulled over and bout a bag of pretzels and a(nother) cup of coffee. I was feeling good. I was feeling really good. I looked at the clock and concluded that, if I drove straight through, I'd be getting to Mike's house around 6:00am. I figured I'd stop for breakfast and bang on their front door around7:00am.

However, "best laid plans" and all that, around 12:30pm, as I was screaming through West Virginia, it happened. I hit the rumble strip on the side of the highway and I never saw it coming. I had to stop. So, I found a rest area in the town of Bridgeport (which, oddly, has neither a port nor a bridge), laid the seat back, set my alarm and closed my eyes.

2:00am showed up a lot sooner than I thought it would, but I knew I had to get back on the road. So, I found a 24-hour McDonald's drive-thru, got some coffee and hit the highway. After only another hour and a half, and after passing into Pennsylvania, I started fading again. Apparently, 90 minutes of sleep wasn't enough. I found a truck stop, once again laid the seat back and slept for almost three hours.

It was daylight when I woke and, after getting yet another cup of coffee and stretching my legs, I got back on the road. Don't get me wrong: I definitely could've slept more. I had someplace to be, though. It was around 11:00am that I pulled into Mike & Tamara's driveway, happy to have the first 1,190 miles of this trip behind me.

The last time I made this drive I was in my dearly departed Explorer. It only got 17mpg, though, which equates to about 70 gallons of gasoline, which equates to about $158 in gas. The Altima, though, got an impressive 38,pg, which means gas only set me back about $73 for the drive. This is exactly why I bought this car. Smooth and comfortable is clearly the way to go.

So, why am I here in the first place? Well, my buddy Mike (I've known him since we were five years old) is in two bands. The one, Junkyard Fieldtrip, is having their CD release party this weekend. I'm doing my best not to be partial when I say these guys are outstanding. You should definitely buy their CD which, I believe, is available on Amazon: 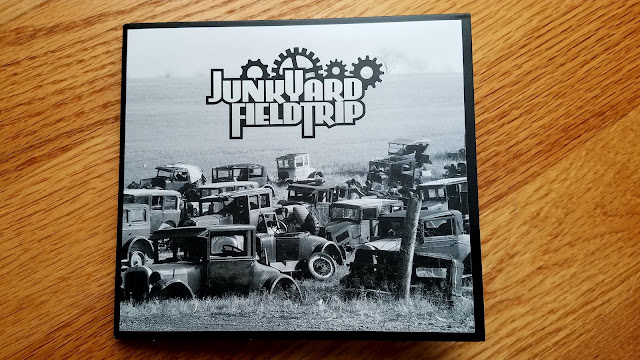 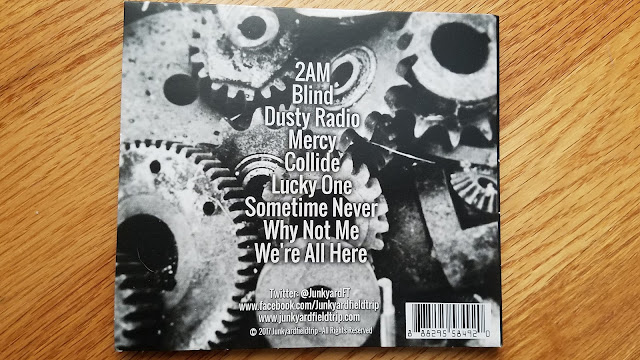 Mike is also in the band Gary Lewis & The Playboys. Well, Gary Lewis is going to be inducted into the Rochester Music Hall of Fame on Sunday, held at the ridiculously ornate Eastman Theater (at the Eastman School of Music). I've been given tentative permission to shoot the event, so here I is! Mike will be performing with the group at the ceremony.

All of this is nice, of course, but the best part for me is getting to hit the road for a while and see some dear friends.

A strong argument could probably be made that I get a bit restless from time to time. It's probably a bit more pronounced more recently, however, since I've successfully broken my chained bondage from a corporate desk and now enjoy, well, let's call it "fluid lifestyle". I'm a fortunate guy in that I do what I want when I want. I answer to no one and am only responsible for, and to, myself.

It's with this mindset that I look to the road. Something's coming up. It could be a trip to New York or to the Keys. It could be to Florida's panhandle or even further to New Orleans. All I know is that it's been too long and my right foot's itchin' to press the pedal.

So, it was with both enthusiasm and trepidation that I recently agreed to go on one such cruise with a large group of friends.

Our cruise was on the Carnival Liberty. We would be sailing out of Port Canaveral, Florida and our destination would be Nassau, Bahamas.

Now, if you've never taken one of these cruises, you should know some things. First, there are a lot of people. In fact, including the crew, there are roughly 4,100 people on board the 952' ship when it's at sea (1,160 of them are crew). Given that, patience is often a virtue as it can often take a while to get a drink, go through the buffet line or, Hell, do just about anything.

Once you get through the initial check in (which took us almost 20 minutes) and your "group number" is called, you're ushered on board and, eventually, find your way to your cabin. We had a cabin with a balcony and, frankly, I'd recommend spring the extra $130, or whatever it is, to get it.

Our cruise was scheduled to be one night at sea (Thursday), ten hours in Nassau (Friday), back to sea that night then a "fun day" (Saturday) at sea. We would pull back into Port Canaveral early Sunday morning.

After getting to our cabins and getting underway, we first found our way to the casino and, more importantly, the casino bar. It was here that we would learn the virtues of things the now infamous "Bahama Mama."

After hanging out in the casino for a while, we found our way down to the Red Frog Rum Bar, located on the Lido Deck. This is the only bar on board which serves the "Rum Jumper" and, well, that's probably a good thing. It's probably the most powerful drink served on board.

The Rum Bar became one of our "go to" places and frozen rum drinks were plentiful.


After the obligatory poolside cocktails, we retired to our cabins and got ready for dinner. There's no shortage of places to eat on board. You can get just about anything you'd like. There's "Guy's Burger Joint", which is the brainchild of Guy Fieri (Food Network). The burgers are excellent and, served up with the hand-cut fries, it makes for a great lunch stop.


Deli sandwiches? Mexican? No sweat. There's even 24 hour room service. For me, the only dining disappointment was the breakfast buffet. The food was rather bland all around and made me wish I'd eaten elsewhere.


For dinner, we would be seated in the Silver Olympian (Aft) Dining Room. It's very nicely appointed, although it seems as though the quality of the meals varied greatly depending on what you ordered. Let's just say that shrimp ain't their strong suit. 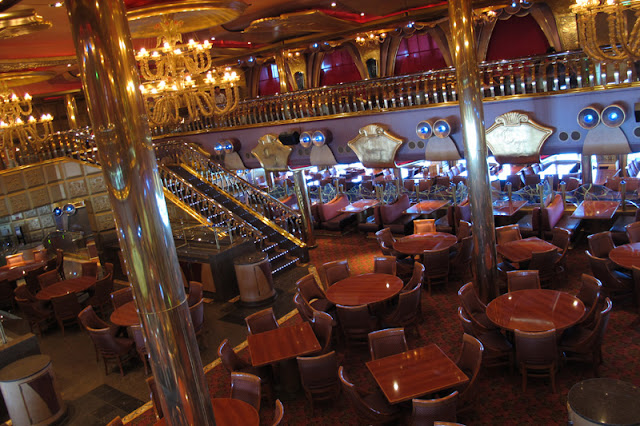 The second night of the cruise is "formal" in the dining room, with everyone dressing up a bit. Even on a "budget" cruise, jackets and ties were plentiful. It was nice to see how well everyone cleaned up.


Our formal dinner was extra special, as my friend T.J. proposed to my friend Leslie. Once we had the entire room's attention, he popped the question. I can only imagine how awkward the rest of the evening would've been had she said no!

At about 4:45am the "man overboard" alarm was sounded, complete with the blaring of the ship's horn. It seems as though some guy from Georgia was on his honeymoon with his wife when, somehow, his wife discovered that he already had a wife. Well, you can imagine that she might be somewhat upset by that and, from what we were able to learn, they had quite a fight about it. Why he elected to jump over a 9th deck balcony railing is anyone's guess. The fact that, apparently, he couldn't swim makes it that much more odd.

We started searching, along with two other cruise ships, two freighters, a tanker and a Coast Guard helicopter. We were released from the search once a Coast Guard cutter got to the scene.

The man was never found.

We should've been pulling into Nassau at around 8:00am on Friday and getting back underway at 6:00pm that same day , but because of the ten hour search, we didn't pull in until about 5:30pm. We stayed in port until 2:00pm the next day. 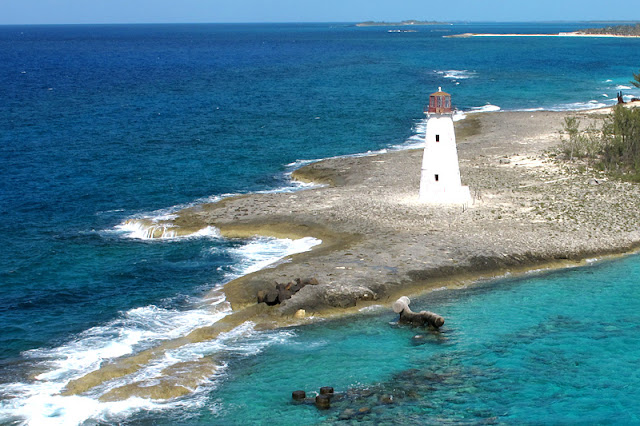 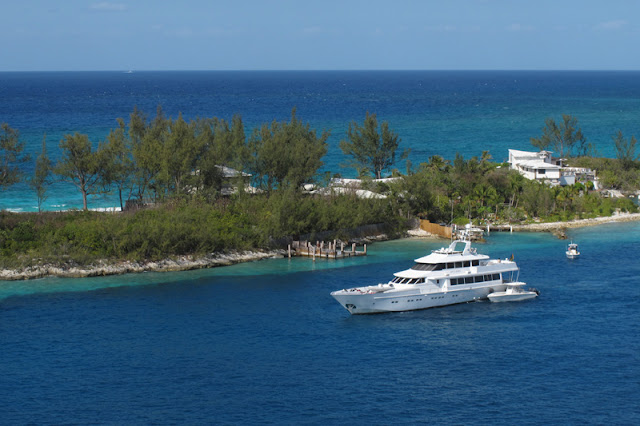 Unfortunately, one aspect of these quickie cruises is that you really don't get to see too much of wherever it is you're cruising to. Two days in port would've been great. Instead, we had just enough time to do some shopping at the Straw Market and then head to Senor Froggy's for some cocktails.


Things started to get a little nuts once we got to Froggy's. The place is there for one reason and one reason only: To give tourists a place to party, and party we did.

The ship itself wasn't bad. Despite having so many people on board, mobility was never really an issue. There plenty of places for everyone to sit and get some sun. There was plenty to do. Again, I think I would've enjoyed another day or two aboard ship. There just isn't the time to truly enjoy it on a three day excursion.


All in all, it was an enjoyable time. It was nice to get away for a weekend and just cut loose a little.

Tips? Well, the cruise itself was $499 per person for a balcony cabin (which, again, I highly recommend), but cabins are as low as $369 (double occupancy). If you enjoy imbibing, go for the drink package and save yourself a bit of cash. Also, if you've got phones and tablets and camera batteries to charge, bring a power strip. The cabin only has one electrical outlet in the main cabin (one in the bathroom, too).

And don't forget your passport...