Inside of 48 hours of my targeted departure, it's difficult to not start getting a bit excited at the prospect of spending the next month and a half on the road. After all, there hasn't been much to photograph outside of my college portrait stuff, and even that's winding down. It's going to feel good to get out there and do the ever elusive "me shooting" again.

My plan is to head to some as-of-yet unknown stop in North Carolina or Virginia somewhere, and then muscle through to Boston on Friday, getting there late that evening.

While in Boston I'm going to be staying with my old shipmate Kenny and his wife Karen. Kenny and I were stationed together back in 1983 aboard the USS Chandler (DDG 996). We've kept in touch since the advent of Facebook, and we talk pretty regularly, but we haven't seen each other in 38 years. It'll be interesting to see how quickly those 38 years evaporate.

We'll be stopping back in Boston on the return leg for a few days, so this first visit will likely be spent catching up and throwin' a few back. I've also been promised chowder.

I'll probably leave Boston on Monday, April 6 and point the car west on I-90:

As for the blog, I don't know that it'll be feasible to update it every day. Daily updates are much easier on Facebook. That said, each time I stay overnight somewhere I'll update the blog. For instance, even though there will be brief daily updates for the three days I'm in Deadwood, there will be a single update on the blog which will cover those three days. The blog updates will undoubtedly have more photos than my Facebook updates, and will certainly have more in-depth descriptions of where I've been and what I've seen, as well.

So, tomorrow (March 31) is "pack the car" day. The camera gear is all charged up, inventoried and ready to go. I've got clothes laid out which will be packed tomorrow. I just need to make sure I leave room in the trunk for my daughter's stuff on the return trip. I know she's bringing a good amount of stuff, so I'll plan accordingly.

So, this will be my final entry until I get to Boston.

When The Fun Begins...

I've lost count of how many times I've driven from Florida to New York. It's almost as if it's become mundane. Sure, there are the places I always stop, such as the Kenly 95 truck stop in Kenly, North Carolina and South of The Border, but for the most part it's a white knuckle, windows-down drive straight up I-95 for pretty much the whole way.

Truth be told, there's just not a lot along the east coast that interests me that I haven't already seen. On the way back maybe I'll stop in Annapolis, but the jury's still out on that.

No, my focus is on getting to Boston. I'll be visiting an old friend and shipmate who I haven't seen in 38 years, Kenny, and his wife Karen. They've graciously offered their guest room to me.

That's when the fun starts.

The last time I was in Boston was 2011. It was only a brief stop, though, and I didn't get to see a lot. I had a friend showing me around, but we pretty much had time only to get some chowdah (yeah, I know), visit Fenway Paahk (yes, I know, it's intentional) and visit the home of Paul Revere. That last one was pretty much a mind blower. When I was a little kid; maybe 2nd or 3rd grade, I'd heard about the ride of Paul Revere. Now I was standing in front of his home.

The level of history there is something you don't find too many other places, so this time through (and especially the return trip), I'm going to exploit the fact that I'll be on no etched-in-stone schedule. On the return leg of the trip I'll leave Boston when I'm good and goddamn ready!

But before the fun comes the work.

Planning this trip has morphed into almost a full time job. Obviously, the route pretty much planned itself. But what to do and where to go along that route is taking some time to figure out. Even though I'll be visiting friends for the majority of the trip west, I'll need to find a handful of hotels in each city where I'll need to find lodging, for both the west and east legs of the trip.

There are lists to make (don't want to forget anything), the car to take care of (rotate tires, replace coolant, etc) and maybe even a little clothes shopping. And then there are the things you may not think of. I'll be gone for five to six weeks. I'm going to need to do laundry on occasion. I'm going to need laundry detergent. I'm going to need a bag in which to put dirty clothes. Geez, some things are just so mundane that it would be easy to overlook them, but wind up being so important that it would be a nightmare if they were forgotten.

With only 13 days before I leave, it's time to start ramping up the preps. This trip ain't gonna' plan itself...

The purpose of this trip is two-fold, of course.

The second purpose of the trip, as you could probably guess, is photography.

Initially, I surmised that I would load pretty much everything I have into a rented Ford Explorer. We're talking two Pelican cases full of gear, some assorted bags with assorted ancillary gear, maybe even some strobe set-ups, etc.  As it is, though, I'll be driving the Malibu, so available space is now a bit more of a concern, so I'll have to be a bit more discerning in what equipment I pack.

With the exception of the X100F, which will always be within arm's reach, everything listed above should be able to fit into my Lowepro backpack. I may even try to throw the Canon 85mm f/1.8 and the Canon 50mm f/1.4 in there, too.

One of the things I want to try to do more of, and most certainly will if my daughter joins me on the return leg, is video. Now, I recently purchased the iPhone 12 Pro Max. The camera on it is pretty great, although certainly not up to the level of the 5D MKIV. Where the iPhone really excels, though, is in video. Switched to 4K, it's almost cinematic. The video on the 5D MKIV is also fantastic, but the iPhone gets the edge when it comes to being compact and its portability.

Between the iPhone and my Fugetek bluetooth enable tripod/selfie stick, I hope to produce some really nice results:

If you like doing selfies/videos and want something sturdy and hands free, this is definitely the way to go. I bought mine on Amazon before I went to Italy. I paid $19.99 back then. It's even cheaper now:

Just for fun I just ordered a second one.

Speaking or tripods, for travel photography a good, sturdy one is a must. After all, you'll need one for all of the "Welcome to __________" selfies you're likely to take:

My Manfrotto is plenty stout enough to handle anything I'm likely to throw at it on a road trip.

I'll probably also throw my Canon shoulder bag in the car for when I'm doing day trips somewhere. After all, if I'm going to see the world's biggest popcorn ball in Sac City IA, or the Salem Witch Trials house, I won't be needing the 100-400mm. With another, smaller camera bag I can pack only that gear which I'll need for a particular day of shooting.

So, that's what I'll have, photographically speaking. I can't think of anything I won't be able to photograph with the gear I'm bringing...

So, as luck would have it, it looks like I won't be renting an Explorer for the trip.

When I first looked into it three weeks ago, the cost was going to be in the neighborhood of around $1,500, not including gas. Since then, however, rental rates have climbed north of $2,300 and gas is getting set to eclipse the $3.00 a gallon mark. Neither bodes well for the rental of an SUV.

So, barring any unforeseen circumstances, it looks like it's back to my 2014 Chevy Malibu: 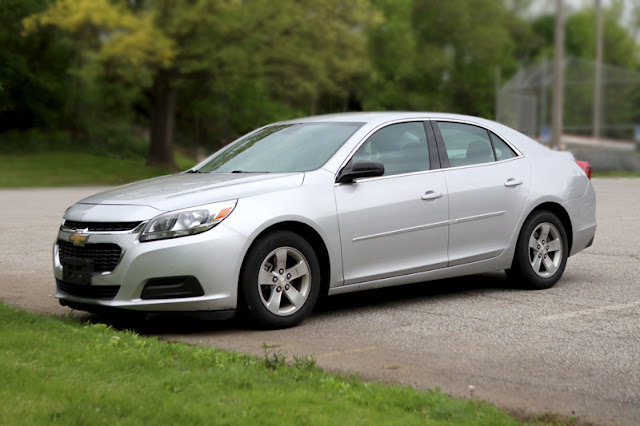 In all honesty, it's a damn good car. It's got less than 80K on the clock and, for a car that's seven years old, that's not bad. It gets in the neighborhood of 34mpg, which is a lot better than the sub-30mpg for the Explorer.

Of course, if something goes south and breaks down during the trip, I'll have to fix it. I'll accept that. The upside is that, if something doesn't go wrong, I'll save over two grand. I could buy all kinds of camera stuff for two grand!

So, we're inside of three weeks now, and it's starting to get "real".