Well, That Was Different...

Like everyone, I've listened to radio for years. My earliest memory of radio was riding along in the back seat of Mom's 1965 Plymouth Belvedere, on our way to swimming lessons at Long Beach in Smithtown, New York. It was usually either WNBC or WABC (both AM stations) out of New York City, and it would play through the single speaker located in the dash. FM? Never heard of it.

Now, when I was a kid, I remember listening to the radio and thinking how cool it was that these radio stations were able to get all of these musicians in to play their hits in their studio. At that age, I had no concept of records (even 8-tracks hadn't been developed yet), so I figured the only way the radio station could play the music was if they had the musicians in the studio.

Okay, okay. Yeah. Not the sharpest knife in the drawer. I get it.

Fast forward some 45 years. By this time, I'd been in television studios and on movie sets. I remember, even at a much later age, seeing what went into making what we watch appear so seamless. Radio, on the other hand, remained a small mystery to me. Of course, by this time, I understood that bands weren't tramping in and out of radio stations. But, beyond that, I'd no real idea on what went into producing a radio show.

A good friend of mine, Madison, is the "morning guy" on KPRI 102.1 FM in San Diego. About a week and a half ago, he invited me to come in while I was on vacation. I jumped at the chance, simply because I thought it would be a cool thing to do. Well, aside from having to get up at 4:15am on a Tuesday while I was on vacation, I was right.

I was given a chair, a set of headphones, and shown how to work the "COUGH" button next to my mic (I'm happy to report that I didn't need it).

I wasn't to be a "guest", per se. In fact, when Madison extended the invitation, I was wondering how I might be a scintillating morning drive-time radio guest. I didn't have to worry about that, though. I was more of a color guy; just chiming in here and there on occasion. There were a couple times when Madison engaged me with actual questions, and we did some back and forth but, for the most part, the show followed what was actually a pretty regimented format in terms of time management.

What was amazing to me was how effortlessly these people put on a show. It's a lot more than spinning records and then going to a commercial break. You see, there are no records. Hell, there weren't even CD's. Everything was in the form of a digital file. Once you put all those digital files together, and time out the traffic breaks and in-studio witty repartee, you can time out a four hour show down to the minute. I thought that was pretty cool.

It was also kinda' cool to be part of the contests. One, "The Impossible Question", was actually won by my very good friend Marklyn Retzer, who was listening in. Marklyn won two tickets to the 2011 Holiday Bowl. I swear, I had nothing to do with that. The other contest allowed me to announce the winner for the KPRI Stocking Stuffer. I have no idea how they determine the winner; I just read the name. I even had the chance to do a quick spot for the San Diego Music Foundation during the "Give Back" segment.

So, I gotta' say thanks to not only Madison, but to Pamela and Christian, as well. They couldn't have made me feel more welcome, and helped make it a great experience for me.

All in all, it was a GREAT time, and I would jump at the chance to do it again...

What? No Magic Bullet?

So, I took the first step today. At 6:00pm this evening, I walked into a small classroom at Kaiser Permanente, and sat down at a desk that was more suited for, probably, a seventh grader than for my six foot two inch frame. But, there I was, ready to go.

I went with the expectation of walking out with a prescription for Chantix. Everyone I know who's used Chantix has successfully quit smoking, except for my buddy Chris, who lost his health insurance and couldn't afford it on his own (the stuff isn't cheap). I walked out, however, with no prescription at all.

I walked out with a plan.

I have a quit date: January 16, 2012. If all goes as planned, my last cigarette will be smoked the day before. I'll get there, though, a little differently than I thought. Seems that they've got people who study and figure this stuff out, and they're smart. Really smart.

First, let me just say that, in the past, I've always tried to quit cold-turkey. Well, I'm probably not breaking any news when I say that doesn't work. I need the smoker's equivalent of a 12-step program, and I think I found it.

Tonight was an orientation. We're talking about a lifestyle change. For 35 years, smoking has been a part of daily life for me, and changing that wasn't going to happen because I went to a meeting. Smoking has been a habit. I need to make not smoking a habit now.﻿ The point of tonight's meeting was to impress upon us (the room was full) that it would be a lot of work, but that there are a number of tools available to help us quit smoking.

We filled out forms, marked down what tools we'd like to use, and had a good group discussion regarding why we smoke, why we want to stop, etc. It was actually pretty enjoyable, and it helps knowing that, every week, I'm going to be in this room with a group of people who are every bit as miserable as I'll be. We were give a folder chock full of information about quitting, support resources, you name it: 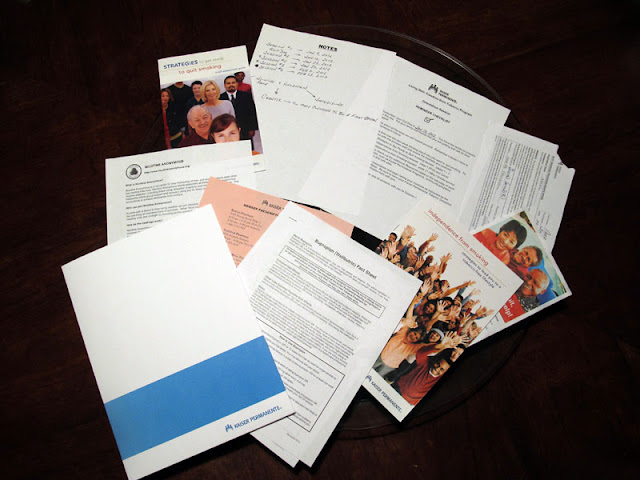 The first step is done; the orientation.

The second step will come on Thursday, when I pick up my prescription. I opted against the Chantix. Apparently, there are serious concerns with it. It does work; that can't be argued. But it's believed that a combination of Welbutrin and the Nicoderm patch are equally effective. The upshot of "the patch" and the Welbutrin is that they don't have the potential very serious side effects that Chantix does. I was a little gun-shy when I learned that Chantix makes some people suicidal or violent, and the confirmation that the other medication, combined with the patch, was as effective was all I needed to hear.

And, if the patch and the Welbutrin don't work, I can always go the Chantix route.

They gave us our "Quit Date" tonight: January 16, 2012. That'll be the third meeting I attend (seems even health care professionals take time off for the holidays). At that point, I'll start using the patch: 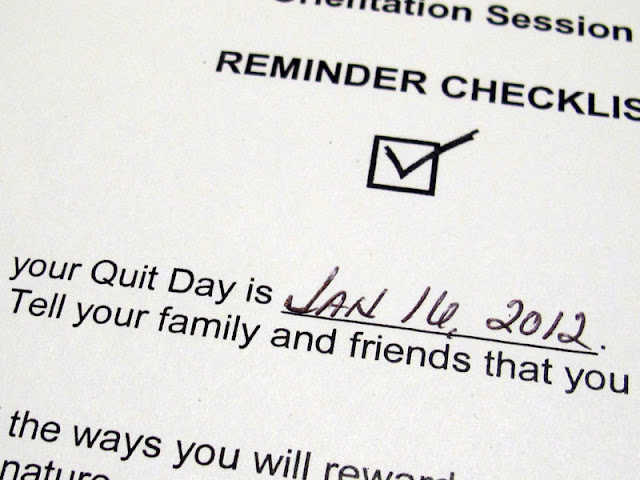 One of the most important things in whether or not I succeed will be how honest I am about it; not only to myself, but to the others in the group, my friends, and my family. The Registered Nurse doing the orientation assured us that we would have lapses. There would be time when we would light one up. If we can be honest about doing that, and share those lapses with our support structures, it actually has a positive impact on our being able to quit. Hiding those lapses gives us the sense that we can "get away with it", and that can only have a negative effect.

So, there it is. That's the task; the job ahead of me. For the first time in my life, though, I really do think I'm ready to do this, and I know I want to. I'm tired of waking up and feeling like I'm coughing up my spleen before my feet hit the floor. I'm tired of not taking those sweet room upgrades when staying in hotels because none of the swanky suites are smoking rooms. I'm tired of scheduling my business travel based on which airports have gate-side smoking lounges.

They Say It's Never To Late...

I'm hoping that today is the first day of the rest of my life.

I'm headed off to the doctor this morning. I'm going to get a prescription for Chantix. I've smoked long enough.

My birthday's in July.
I remember when I started. I was 15. Back in the 70's, it still wasn't the horrible thing that it is today. Smoking, in certain circles and in certain situations, was okay. That's not the case today. But, back then, a girl I liked smoked Salem Light 100's. So, naturally, that's where I started. The long and short of it is that I didn't get the girl, but I did get a lifetime habit that's affected my health and my wallet. Every year, about $2,400.00, quite literally, goes up in smoke.
I travel a lot and, I can tell you, travelling is a bitch for a smoker. Very few airports have smoking lounges these days. When I plan my travel, airports in Denver, Washington DC, Salt Lake City, and a spare few others pop up on my itinerary. If I have a layover, I don't want to have to go out through security, have a smoke (or more, depending on the length of the layover), and then go back through security to board my flight.
Oh, and non-stop cross-country flights? Those have become the absolute bane of my existence. I can do them, and I have, but I was never happy about it. I was far more likely to opt for a flight that stopped in Denver (which has two lovely gate-side smoking lounges) than I was to book a non-stop flight to Toronto or New York.

Chantix has worked for everyone I've spoken to who's been on it, and that includes many who were heavier smokers than me. I gotta' think I have a very real chance with this.

It's a weird feeling, knowing that there's a better than average chance I won't smoke anymore. It's just something I've always done. In some ways, it's like pulling over to the side of the road, telling a dear friend to get out of the car, and then driving away.

I hope I can do just that, and not feel the need to look in the rear view mirror...