I used to be a smoker.

I smoked for about 35 years. I started smoking while in high school. I probably started because all the cool kids did it and, well, dammit, I wanted to be a cool kid. Also, a girl I liked smoked. She smoked Salem Light 100's (in a box). I concluded that if I, too, smoked Salem Light 100's (in a box) I might stand a better chance with her. The success of that is debatable, although she is still one of my dearest friends to this day.

In that 35 years, I surmise I smoked around 19,200 packs of cigarettes. For those keeping score at home, that would be some 384,000 individual cigarettes. Permit me to put this into perspective for you:

Over the course of those 35 years, I figure I averaged a pack and a half a day. At an average price of $3.25 per pack, I spent in the neighborhood of $62,400 on cigarettes. That's money that, quite literally, went up in smoke.

What could I have bought with that money? Well, let's see:

But it is what it is. My clothes and my hair used to stink all the time. I never realized it, of course, but they did. Now, that only happens when I've been tending bar (they allow smoking in bars in Florida). I went a long time thinking it wasn't really an issue.

But all of that's in the past now. It's been five years since I put out that last cigarette. Since then, I've been through quite a bit, but I never faltered; not once. I'm proud of that. I put on a few pounds as a result. I'm dealing with that. But there's no denying that I know I feel much better than I did five years ago and, well, my wallet's in better shape, as well.

Now, I still get cravings. I get them all the time. I had a craving the other night that was one of the strongest I recall ever having. But the cravings will pass whether I light up or not, so I simply choose not to. After all, I'm a non-smoker.

For those who think they can't do it, I'd disagree. I won't throw out the "If I can do it you can do it" platitudes, though. Instead, I will say that, once I decided I wanted to quit; I mean really, truly wanted to quit, it was one of the easiest things I've ever done.

A Favorite? Not A Chance...

I was recently asked if I could pick, from every photo I've ever taken, a favorite. Well, I can't do that. There are too many "favorites". I was also asked about how I went about getting the shot. I can probably do that.

I recently moved all of the photos I took in 2016 from my desktop onto an external hard drive. There were some 44,000 photos. That's 120 photos a day, every day, for an entire year. That's five photos every hour, every day, for an entire year. Consider that I've been a photographer of some sort or another since the late 1970's and a professional photographer since 2013.

That's a lot of photographs.


Of course, this comes as no surprise to anyone who knows me. Whether I'm on a road trip, at a race track, a concert or just walking around old St. Augustine, you can bet your last shiny nickel that I'm going to end up with way too many images at the end of the day.

So, no, I can't pick a single photo. But I do have a few for which I've developed a special fondness.

Before I get into those, though,the question often comes up about the equipment I use versus the equipment I could've used. Digital photography has certainly become accessible to the masses in no small way because of the proliferation of high quality "point & shoot" cameras. I have my eye on a couple at the moment. While I have an old Canon G12, I rarely use it. This is, in large part, because of the quality we now find on cell phones.

This is Devil's Tower near Sundance, Wyoming. I took this photo with my Canon 5D and, if I recall correctly, the Canon 24-70mm f/2.8L. The original image was color and I converted it to black and white in Photoshop. I took this photograph in June of 2012 during a 5,800 mile, 25 day cross country trip: 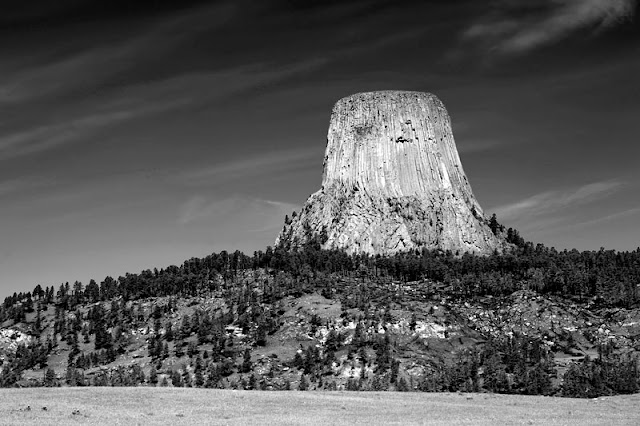 The weather was about as perfect as possible. Few clouds and plenty of sunshine meant that I wouldn't have to worry about setting up a tripod or anything. I was simply able to pull over to the side of the road, aim the camera and press the shutter release. I don't recall the parameters of the shot, but I would guess it was taken at about 1/640 at f/6.3, at an ISO of 100. It was an easy photo to shoot, although. I don't know that I could've gotten similar results with the iPhone 4S I had at the time. The early iPhones never impressed me in that regard.

This is an abandoned factory (a steel mill, I think) in Chattanooga, Tennessee. I was studying real estate photography with my dear friend Holt Webb (who's also a ridiculous photographer) in late 2014 when we found this little gem. I shot this with the Canon 6D. Unlike the Devil's Tower shot, I needed to exploit a wide angle lens here, and the Canon 17-40mm f/4L was the perfect fit. 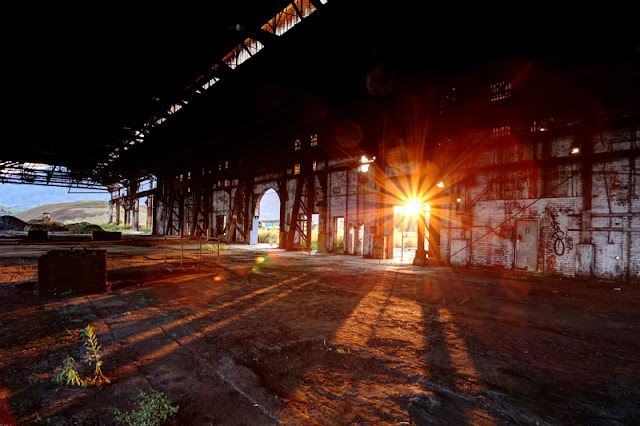 I wanted to get the setting sun coming through an archway, but I didn't want to just have a "blob" of sunlight. I wanted, well, what you see here. I stopped down to f/16 (I don't know why I remember that), but that required me to slow the shutter down a bit. I wanted to make sure I had absolutely no motion blur, so I set the camera up on my Slik tripod and used a wired remote to trigger the shutter. When I took the photo, I didn't even notice the sun along the ground, nor could I see the bits of lens flare which, for me, help complete the photo.

Lastly, this is a sunset taken on my friend's boat, Charlie's First. Cliff operates Always For Sail charters here in St. Augustine and I was out with him one day doing some photo work for him. I hand-held the camera for this shot. Because I was on a boat, I had to hand-hold the camera. Setting up a tripod wasn't an option. 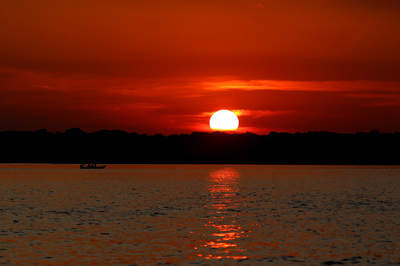 I boosted the ISO to 3200 because of the dwindling light. I shot in Manual with the Canon 6D and the Canon 70-200mm f/2.8L. I did very little editing to this photo. I cropped it and cloned out a power pole in the distance, but did nothing to the color. This is pretty much as it was recorded.

While the full-frame bodies I shoot with get the job done (and done well), there's no denying the improvements being made in smaller cameras and, yes, even phones. I took this photo with my Apple iPhone 6S. It's not going to end up on the cover of LIFE or anything but, technically speaking, this shot of the Vilano Bridge in St. Augustine is a pretty good image: 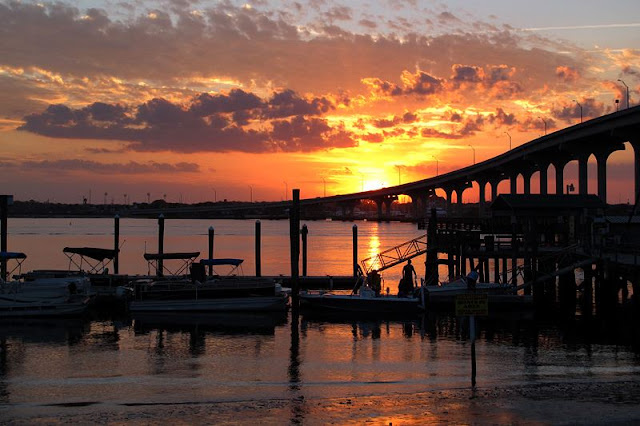 Some companies simply try to do what others have done before them, only better. There's not a thing wrong with that. That's one of the reasons I've been eyeing a new Canon point & shoot. I've read good things, and it would be nice to leave the DSLR home now and again.

Then there are those who look at how others have done things and take a completely different approach. One camera I'm watching out for is the new Light L16. I can't use any of their photos here, simply because I don't have permission to do so, but. you can read about it on their website light.co.  I tend to be skeptical of new approaches to photography (it took me forever to let go of film), but I can't lie: the L16 is intriguing as Hell, and I'd love to get my hands on one.

So, which way is the best way to go? Well, it depends on what you want to do and how you want to do it. Working for a magazine, a lot of my photos are taken with the camera on a tripod. When I take food shots, for instance, I have the room and the time to set up the shot: 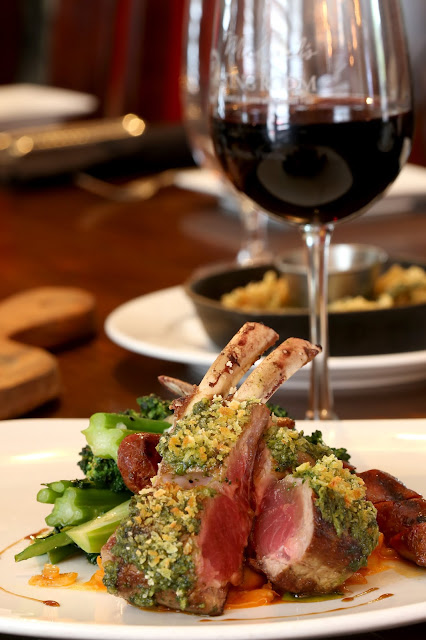 But when time and mobility become primary considerations, it's time to start looking at options. I'll never get rid of my DSLR's, but I'll certainly want something which compliments them.

And who knows, maybe I'll get another shot at Devil's Tower...