May was a doozie.


For the first time since I was in the Navy, I spent more time "on the road" than I did at home. The last time that happened, I was deployed aboard the USS Princeton (CG 59) doing anti-drug ops off the coasts of Central and South America. That was 1997.
My first trip saw me in Alberta; Edmonton, Calgary, Medicine Hat, Red Deer and Canmore, specifically. It was a good trip that I chronicled in a previous entry.
After that ten day trip, I came home. For a whopping four days. After that, it was off to Toronto for eight days. That trip was for a trade show, and it was a pretty damn good time.
I tried to take more pictures in Toronto than I usually do. Toronto's one of those cities which, after a couple of visits, you just don't figure there's much to take pictures of anymore. While that's true, I thinki, to an extent, I did try to take photos on this trip. Truth be told, there are portions of Toronto which are pretty visually striking. Why not shoot them?
While I didn't take a ton of pictures, I did manage to get a couple here and there. The weather was absolutely lousy, so that kinda' put a damper on things and, when it wasn't raining, I was busy walking from Point A to Point B, in a hurry, so I could avoid the impending rain.
Without a doubt, the most obvious subject of photos in Toronto is the CN Tower. It's big. It's really big. AT one time it was, at 1,815 feet, the tallest free standing structure on the planet. The elevator up to the observation deck, of course, is an exterior glass elevator. Needless to say, this probably isn't the best place for an acrophobic.
But it's still cool, and I didn't hesitate to jump on the elevator and head to "360", which is the revolving restaurant which sits just atop the observation deck. It's in the Guiness Book Of World Records as the worlds highest revolving restaurant, and also for having the world's highest wine cellar.

After a week in Toronto, it was time to head back to San Diego. I'd had a lot of "road time", and was looking forward to a little bit of down time.
Once back in San Diego, I had to get ready for a concert shoot; the Barenaked Ladies. I've gotten to know them a bit over the years, and it's always a fun shoot. They were playig at Humphrey's Concerts By The Bay in San Diego, which is a great outdoor venue right on San Diego Bay. I spent the better part of the day with them, and I was given unfettered access to shoot that night. The last time that happened was with Styx back in 2007. Normally, you get to shoot the first three songs and that's it. BNL allowed me to shoot all night, and from anywhere I wanted.
The first three shots were taken from the front of the stage, but I spent a good deal of time on the stage wings, as well. That's just something that doesn't happen.

They're one of my favorite acts to shoot (I've shot them three times now), and they're a great bunch of people; everyone in their organization is.
So, now I'll enjoy short week before heading out again. Tomorrow's Memorial Day, so no work on Monday. Thursday afternoon I leave for Dallas, Texas. I'll drive to Austin on Friday to do a two-day album cover shoot for a Houston-based guitarist named Jeff Pritchett. This will be my first "dedicated" album shoot, and I'm looking forward to it.
And, who knows? Maybe, at some point, I'll get a chance to do, I dunno', nothing for a while...
at May 29, 2011 No comments:

I've kept this blog for a while now, and I've always made it a point to never get political in my postings. I've endeavored to keep my personal views on issues of politics out of this particular public eye.

That will change this evening.

I will also apologize now for the language which I also try to keep out of my postings.

Like practically everyone I know, I will never forget where I was when I learned of the attacks of 9/11. It was a Tuesday morning, and I was in bed. It was about 6:00am, and I remember hearing a panicked voice on my answering machine. It was my brother, who was calling from Florida. He was yelling into the phone to wake me, to tell me that the World Trade Center had been attacked. I remember turning on the television and sitting in both utter horror and amazement.

How could such a thing have happened? How is it that some third world jackass was able to conduct what is widely viewed as the single most horrific, and successful, attack on the western world? How is it that this cave dwelling piece of shit was able to all but bring us to our knees?

However it happened, it happened. We identified countless failures in our security as a result, but the reality is that it took the deaths of almost 3,000 Americans, of all colors and faiths, to get us to that point.

As I will never forget where I was on 9/11, nor will I ever forget where I was at 10:42pm on May 1, 2011, while I was in Edmonton, Alberta, when I first learned that Osama Bin Laden had been killed. Not only had he been killed, but US forces had his body. A directed attack in Abbotabad, Pakistan, by United States Special Forces, resulted in the death of who was, and let's be honest here, the most reviled man in modern history.

Bin Laden wasn't hiding in caves in the mountains, but rather in a high-dollar compound in Pakistan. How we learned he was there is something I don't really care about. The fact of the matter is that we found out where he was, and we went in and we killed him.

Payback is, as history shows, a bitch.

I'm sitting in a hotel room in Edmonton, and I'm actually giddy. When I first heard the news, I let out a yell. Could it really be true? Well, it certainly appears so. Osama Bin Laden; the man we have searched for for almost ten years, is dead, and US forces killed him. It also bears mentioning that, during the firefight that killed Bin Laden, not a single US serviceman was injured.

Now, off this blog, I'm pretty critical of Barack Obama. I don't like him. I don't think he should be President. I think he's a neophyte politician who, somehow, snowed enough people to put him in the Oval Office. But, as critical as I can be of the man, I can also give credit where credit is due. I'm proud that my President, whether I like him or not, had the balls to make the move that needed to be made, when it needed to be made. Our Special Forces have proven, once again, that they are a results-driven organization and, even when the task is daunting, they can get the job done.

Kudos to our Armed Forces, and kudos to President Obama.

It sounds cliche to say, especially because I feel this way every day but, today, I'm proud to be an American. I'm proud to call home the country which, in its' own effective way, exacted justice for the deaths of 3,000 people whose only crime was going to work one Tuesday morning.

Now, I assure you, I'm nowhere naive enough to think that "the war on terror" is over. It's not. Lord knows that are enough sick bastards out there who are all too willing to step into Bin Laden's shoes. But Bin Laden was special. Bin Laden was a rock star. Bin Laden was larger than life.

And, tonight, Bin Laden is dead.

And we killed him.

Whenever I visit Calgary, I make it a point to make the hour drive west to Canmore. Canmore is a small town with a population of around 10,000. It's the quintessential "mountain town". You won't find any Wal-Marts or Costcos out here. Instead, you'll find small "Mom & Pop" stores dotting the main street. Only when you get closer to the Trans-Canada Highway will you see a "chain" anything, in this case a McDonald's, a Tim Horton's, and a Holiday Inn.

﻿ ﻿ The drive out isn't bad at all. Unlike the trip to Medicine Hat, this drive is almost over before you know it. But you still get some pretty majestic views along the way. I've been all over the world, and I just don't know if anything comes close to matching the Canadian Rockies:

Once you get into the mountains, you have to be aware of where you are or, more importantly, what else is where you are. Wildlife is abundant out here, with deer and elk being the most prevalent. And Canada wants to make sure you're paying attention:

I'd decided I wouldn't spend the night in Canmore, but would drive back to Calgary this evening. My buddy Tom and I had dinner at this killer Italian restaurant in Canmore, said our goodbyes, and I was on the road.

Just outside out of Canmore, on your right, you'll see the imposing peaks of what are known as "The Three Sisters". I've been up here as late in the year as August, and these peaks always have snow on them. They're probably the single most recognizable landmarks out here:

While I've been up here in April before, I don't recall ever seeing the weird weather I've seen on this trip. Indeed, even the locals say it's unusual. On Thursday, when I went to Medicine Hat, I had to contend with a storm the size of Texas. Today, as I drove east back to Calgary, I saw one of the more odd cloud formations I've ever seen. It looked like something out of a science fiction flick:

While you pass countless signs during the drive which tell you how far away from Calgary you are, after a while you become kinda' numb to them. But there's one landmark, as you enter Calgary, that is absolutely unmistakable. Calgary, you see, played host to the 1988 Winter Olympic Games (the biathlon and Nordic events were actually held in Canmore, by the way). One of the lasting features of those Olympics is Canada Olympic Park, located on the western edge of Calgary. Before you see the sign for Canada Olympic Park, though, you see this:


Not long after stopping at the Olympic Park, I was pulling into my hotel parking lot. I dig days like today. I love going to Canmore. I love being there, and I love the drive. Leaving is a bit of a downer, I guess, but I know I'll be back; hopefully for the Canmore Folk Music Festival at the end of July.

At least, if I come back in July, I know I won't have to worry about snowball fights... 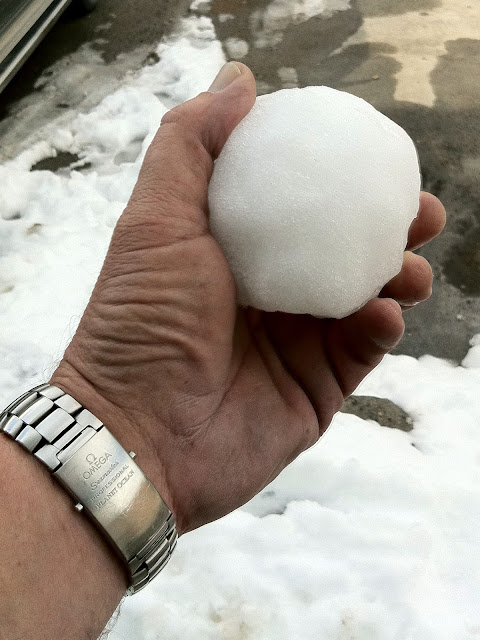