When I was a little kid, I played Little League baseball. In later years, I played organized softball. And, from time to time, I would end up using a Louisville Slugger bat.
But "Louisville Slugger", the brand, almost never happened.
In 1884, legend has it that the son of J.R. Hillerich, 17 year old Bud, skipped out of work at his father's woodworking shop to watch the local professional baseball team, the Louisville Eclipse. When Pete Browning, the team's star player, broke his bat, Bud invited him back to his father's woodworking shop, where he made a bat to Browning's specifications. The next day, Browning went three for three and broke out of his slump. In no time, pro baseball players were trying to have bats made in the small shop.
J.R. Hillerich, though, was completely uninterested in making baseball bats, and turned ball players, and their money, away. After a time, though, he relented, and the rest is history.
So it is that Louisville Slugger is synonymous with Major League Baseball. Everyone from Babe Ruth to Derek Jeter has stepped out of the dugout carrying a Louisville Slugger.
The factory and museum is relatively easy to find. It's in Louisville's "museum row", and parking is relatively easy to find in a lot behind the building. I was there on a weekday, and I think parking set me back two bucks for two hours.
And, really, there's no missing the entrance:


Once inside, the first thing that hits you is the smell of sawdust. It's not overwhelming at all, as the factory is still through two sets of doors. Still, you smell it. You know it's there. There will be time for that, though. The museum is a must-see before the factory tour.
I guess it goes without saying that a brand as iconic as Louisville Slugger would have some significant bats in its museum's inventory:


The ﻿museum has bats from every era of the company's history, as well as exhibits explaining the science (yes, apparently, science gets involved) of baseball bat production. It proved to be a nice respite from the world driving past outside:
Much to my photographic dismay, photography is forbidden inside the factory. Our tour guide, Miciah (yeah, it's spelled correctly... I think) said that not allowing photography was to protect them from industrial espionage.
Pal... C'mon. It's a wooden bat.
There was nothing on the tour which even approached anything "revolutionary" with regards to wordworking. Automatic lathes and CNC machines were plentiful, but they weren't doing anything other than shaping bats, which is hardly an industry secret. Be that as it may, photography was verbotten.
And, as much as not being able to take pictures sucked, they did make up for it (a little, anyway) by handing out free Louisville Slugger "mini bats" at the end of the tour:
The gift shop was actually pretty cool. You could order a bat with pretty much anything you wanted printed on it. There was also no shortage of MLB team memorabilia for purchase.
I decided it was time to move along, so I found the door, walked past the ginormous baseball bat, and turned the corner to get to my truck. I didn't notice it on the way in, but the planter boxes along the sidewalks by Louisville Slugger are all shaped like home plate: 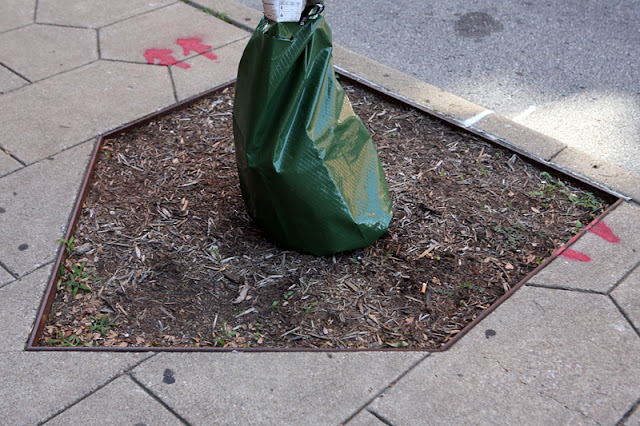 All in all, it was a nice enough stop. I do wish that photography would've been permitted, but it is what it is. I got to see how an iconic brand is manufactured, and I got some free swag in the process.
There are certainly worse ways to spend an afternoon...
at July 05, 2013 2 comments: