We decided that, after a week of going and going every day that we would slow it down a little bit, and give ourselves  a break. We decided to make Valentine, Nebraska a two day stop. We'd be able to decompress, recharge and maybe even get some laundry done. We even got that stop at Carhenge in (and you should totally go if you get the chance!).

We got to our hotel and got settled in, but we wouldn't be staying long as we were both pretty much famished. Now, there's not exactly a whole lot to choose from when it comes to dining options in the thriving metropolis of Valentine, Nebraska, so it came as a relief that the restaurant we chose, The Peppermill, was outstanding. Jess got some tasty chicken thing, but I had to go for the brisket. Now, no offense to any of my barbeque-makin' friends, but this was probably the best brisket I've ever had, and it's hard for me to envision brisket that could be even moderately better:

It was the end of a very long day, so when we returned to the hotel it wasn't long before we were calling it a night. There would be no alarms set, no long drives started; nothing, and that was a nice change.

The next day, after knocking out some laundry, we decided to explore  little bit. Now, make no mistake, Valentine is a very small place. The population is right around 2,700, give or take, and it's almost a game trying to figure out what all of those people do for a living. There's no industry to speak of, and the next town down the road is quite a ways down the road.

But what Valentine has is character. It's got character to the nth degree. The "small town feel" is everywhere you look:

Valentine is known as "The Heart City" and there's no shortage of hearts and heart-like motifs throughout the entire town. So popular is the town that every February 14, the post office is inundated with cards and letters to be postmarked with a heart and the town's name. 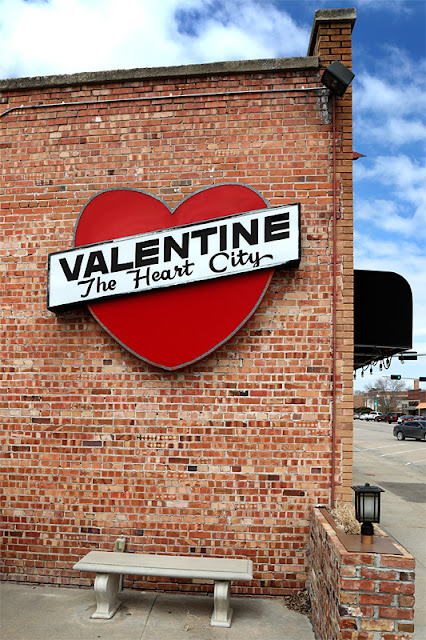 So, if and when you find yourself in the middle of Nebraska and needing a place to stay, you could do a lot worse than Valentine, where the people are friendly, the red meat is amazing and even the Super 8 is cozy and warm...