As I mentioned in an earlier entry, we finally got to our hotel in Billings, MT around 1:30am. Needless to say, we were pretty exhausted.

The next day's drive was from Billings to Casper, WY, and we took our time doing it. We were in no hurry to do anything much at all, although dinner would certainly be on the agenda. We did make a stop at Little Bighorn Battlefield National Monument. I'd been there twice; once in 2013 and once while on this trip, so I didn't take any pictures.. But Jess had never been and, since it's only about 1/4 of a mile off the freeway, we decided o take a break. And, I should mention again, my National Parks pass I received at Badlands got us in for free, when we'd have paid $25 without it.

After Little Bighorn the drive to Casper was relatively short. We got to our hotel and settled in and, before too long, we decided to get dinner. We founds a place called The Branding Iron. Advice to heed: If you ever find yourself in Casper, WY and you get hungry, go here. The burgers were pretty amazing, the beers were cold and the martinis were damn near perfect.

Jess also wanted to check out a local camera store while we were there. I told her that we'd track it down the next day before heading out. Well, as it was, the camera store was directly across the street from the restaurant where our Uber driver let us out. Needless to say, this meant it was somewhat easy to find the next day.

Casper was nice and relaxing, but the drive to Valentine proved to be one of the more enjoyable drives of this entire trip.

Located in the thriving metropolis of Alliance, Nebraska, Carhenge is Nebraska's answer to England's Stonehenge. I first heard of this some years back and have always wanted to visit.. A local gentleman, Jim Reinders, built it as a memorial to his father in 2007. It consists of 39 vintage automobiles, all spray painted gray.

The best way to describe Carhenge is "bizarre". Out in the middle of nowhere in Alliance, Nebraska, it's a free attraction that's been featured in the documentary "Carhenge: Genius or Junk?" and in the 2007 travel book 1,000 Places To See In The USA And Canada Before You Die.

The cars used for Carhenge were all junked at some point, and Reeinders decided he could use them for his weird little project. But the Stonehenge homage isn't the only thing you'll see here. It's been dubbed an "Art Car Reserve" and, as such, has other works of art, as well: 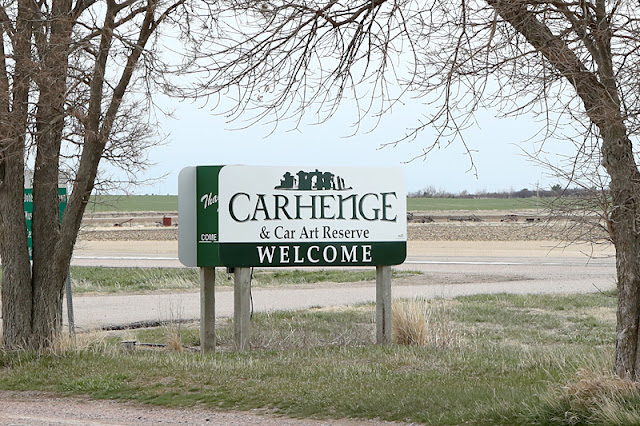 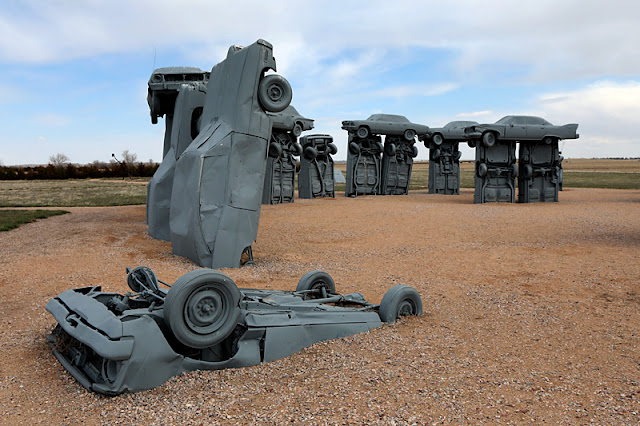 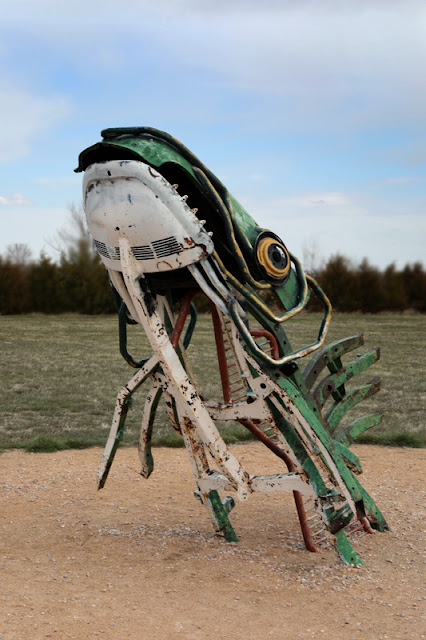 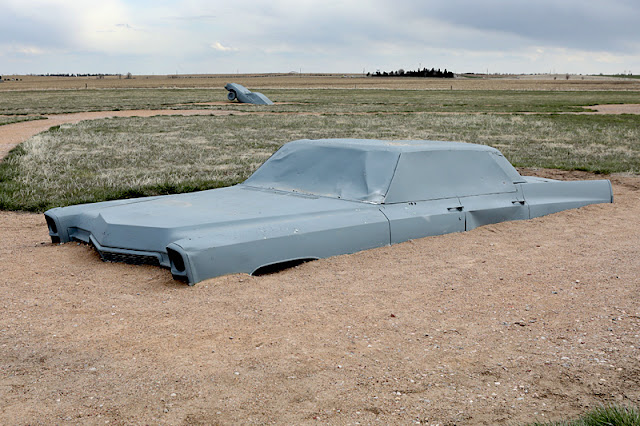 Despite so many potential "blank canvases" for graffiti that can be found here, there's actually one on which visitors are allowed, and in fact encouraged, to write on. It's "the autograph car" and all you'll need is a Sharpie. When you walk onto the grounds, just turn to your right and you'll see it. 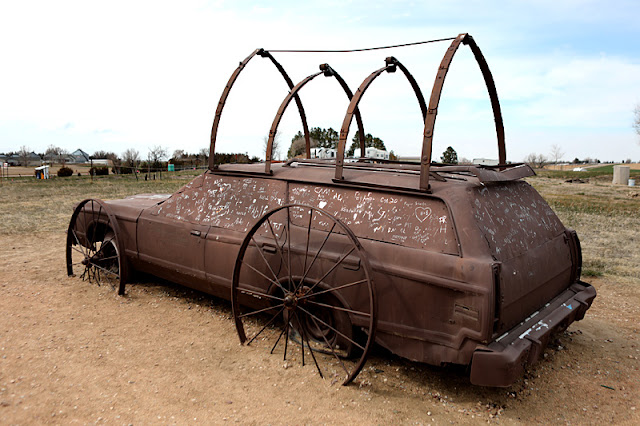 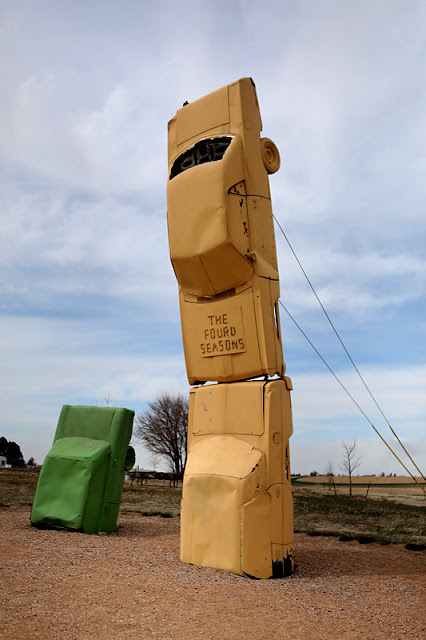 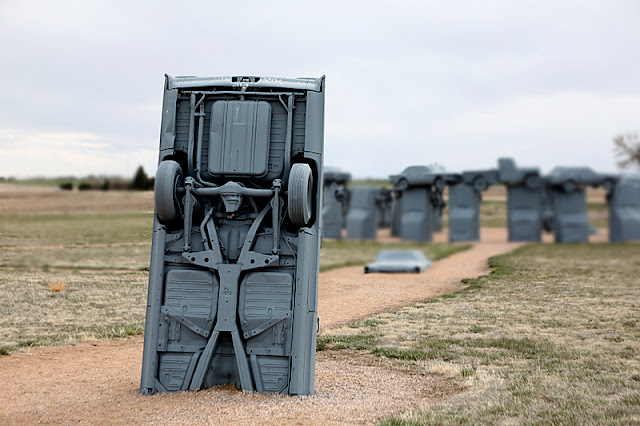 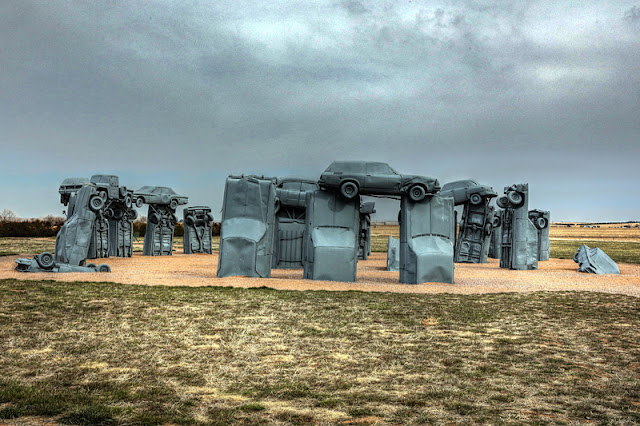 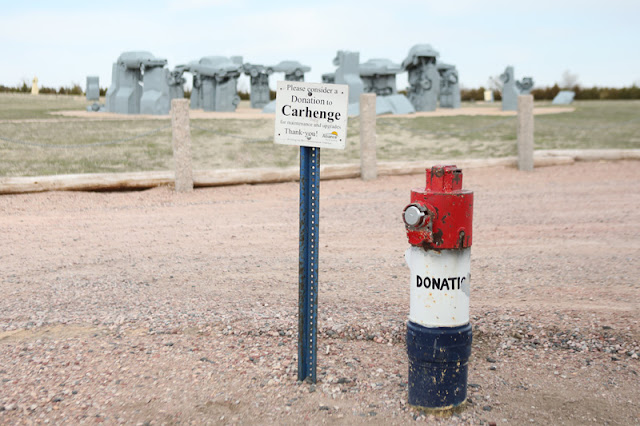 Donations are appreciated, as there's no admission fee to enter and enjoy this roadside attraction. However, giving a donation can prove difficult. I tried to cram a $20 bill into this red, white and blue "donation" thing, but I couldn't. It was cram packed with cash. Instead, after I get back to Florida I'll contact them and find another way to donate.

Carhenge is truly one of those things you could really only ever find here in the States. It's a combination of commitment, talent, and just just weird ideas all coming together at the right time and the right place to produce something so classically American.

Weird stuff is always fun to find when you're traveling, and you're not gonna' find too much stuff that's weirder than this...