The day to visit Yellowstone had finally arrived.

I have to be honest: I was a little giddy. For me, there are two "great" National Parks: Yosemite and Yellowstone. I visited Yosemite many years ago, and it was pretty amazing. Yellowstone proved to be just as amazing, if not more so.

We started our day around 10:00am with breakfast at The Book Peddler in West Yellowstone. Part coffee shop, part book store, this is a quirky little shop that has a much wider book selection than a food selection. That's okay, though. We got some really, really tasty breakfast sandwiches and drinks which we enjoyed on-site. When we got done, we hit Yellowstone Camera Store, which was actually pretty well stocked. Hey, when you operate so close to one of the nation's premier National Parks, you'd better be able to get the people what they want.

After a bunch of hemming and hawing over possible purchases, Jess decided to wait on both a lens and a tripod. I, however, went shopping. Yup; I got me a second battery pouch and a Yellowstone Camera Store hat.

A big spender, I am. Let there be no question about that.

When we were done at the store, we hit the road. Literally five or six minutes later, we were entering Yellowstone through the west entrance.

Now, this might be a good time to mention our plan: We planned to enter the park through the west entrance, cruise along until we got to Old Faithful, watch that erupt, and then head out through the east entrance and on to our next destination.

So, yeah, remember that plan.

We arrived at the park at around noon or so. We got our map, and the park ranger advised us that only the roads depicted in blue and black were open. Upon inspection, we found that the road to the east entrance was shown in orange. If you're keeping score at home, this is adverse impact #1 to our plan.

After being in the park for about five minutes, we saw what everyone hopes to see: a bison. There it was, just lopin' alongside the road. We weren't certain, but we decided to treat this as our one bison sighting of the day: 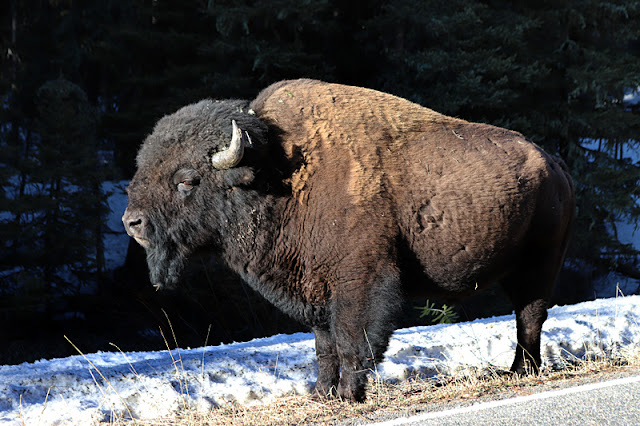 Now, we might have been a bit low in our estimate of just how many bison we would actually see. In actuality, there are, by some estimates, up to 5,000 bison in the park. With so many in the park, you can certainly expect just a few. We ended up seeing hundreds of them. Some were loners, others were in herds, both large and small: 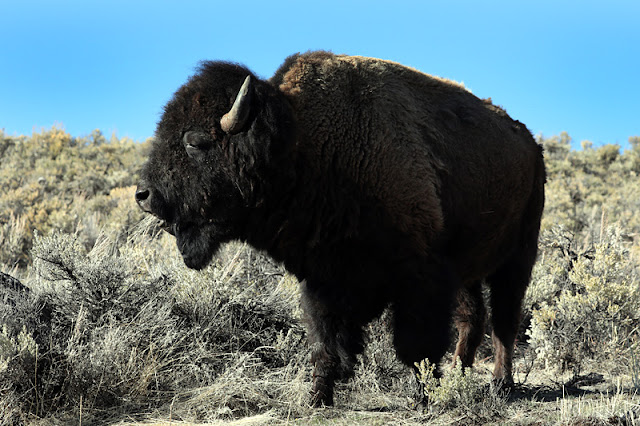 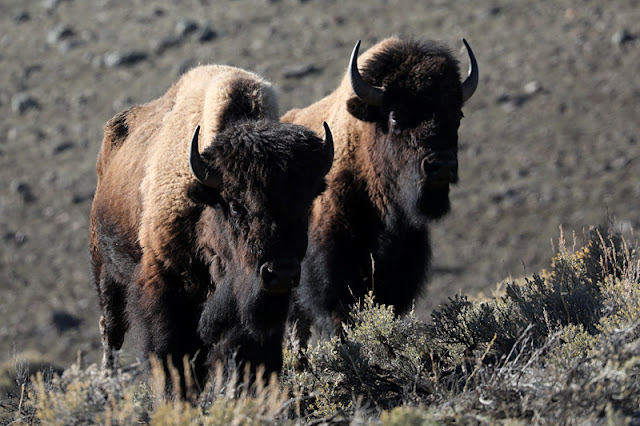 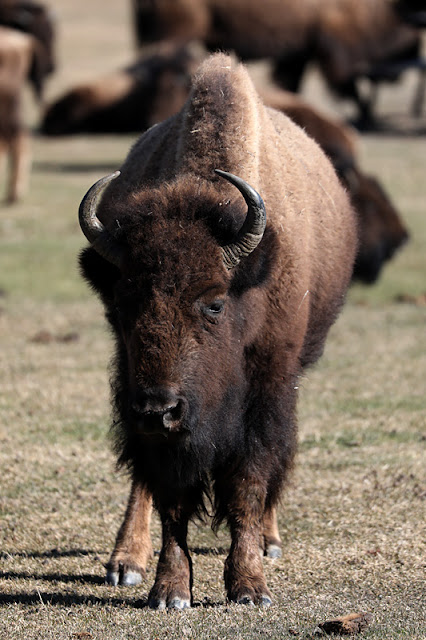 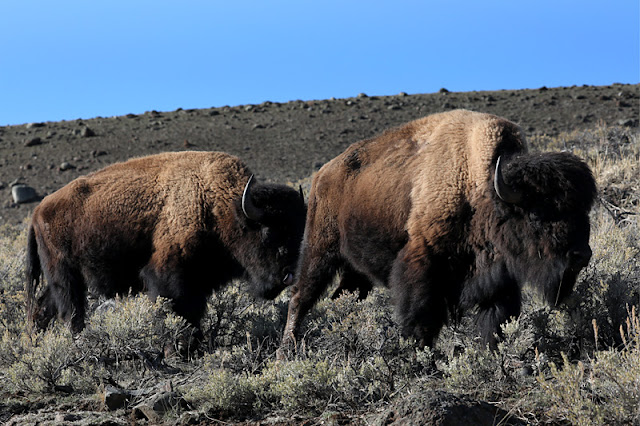 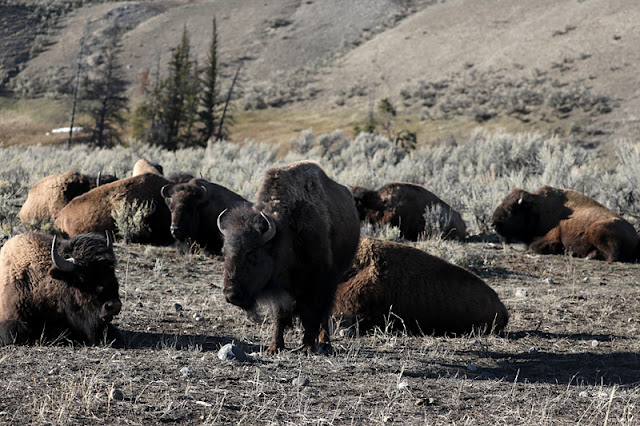 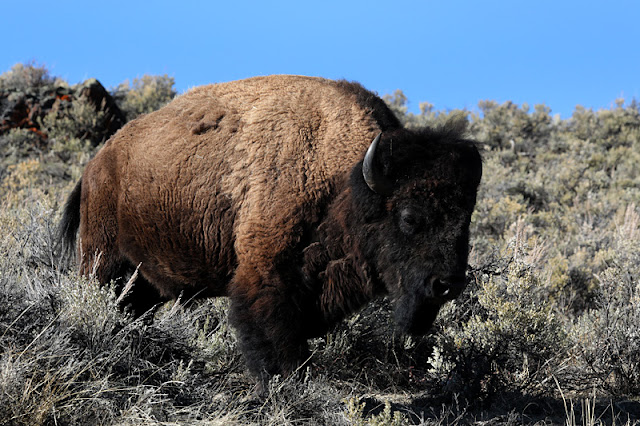 Now, bison are hardly the only wildlife in the park. There are deer, elk, wolves, foxes, pronghorn, bear; a host of animals, both dangerous and not so much. We found a non-so-dangerous one when we came around a turn and saw a fox sitting in a clearing: 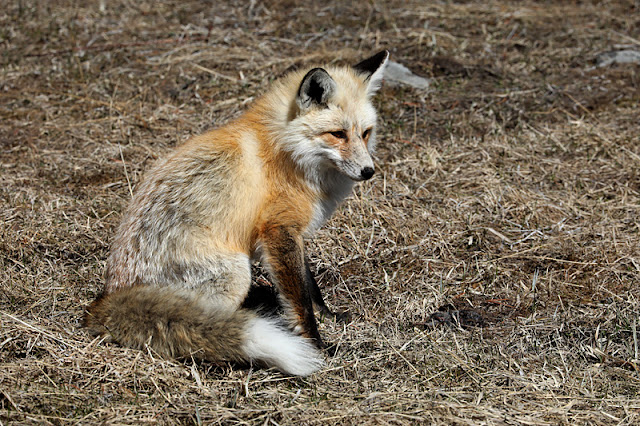 It seemed odd that a fox would just be sitting in a clearing in Yellowstone while those pesky humans were photographing it, but it just sat there.

It just sat there until it rammed its snout down a hole and came up with a mole of some sort. 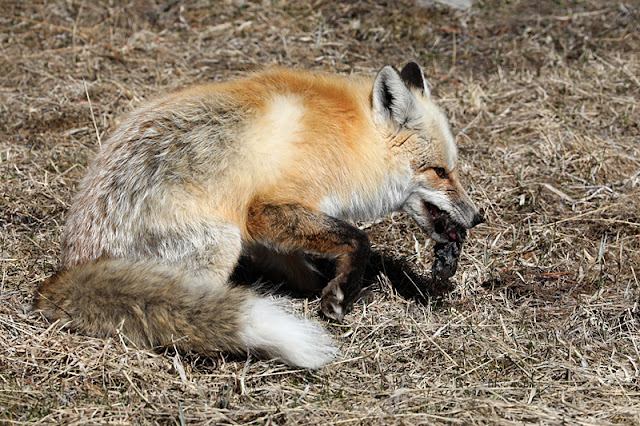 Now, as cool as it is to see and photograph the wildlife in the park,the wildlife's not the only reason to visit the park.There are countless geysers and springs to photograph. If you've never experienced it before, it's what's known as a "target rich environment".

While most visitors will want to visit the Grand Prismatic Spring, there are literally hundred of others to photograph: We found a much smaller one which was pretty picturesque in its own right: 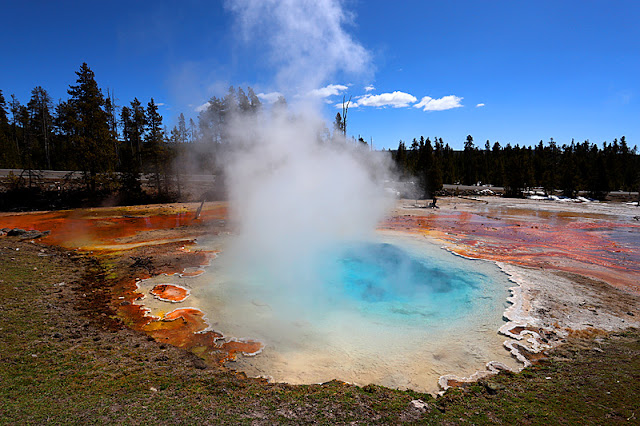 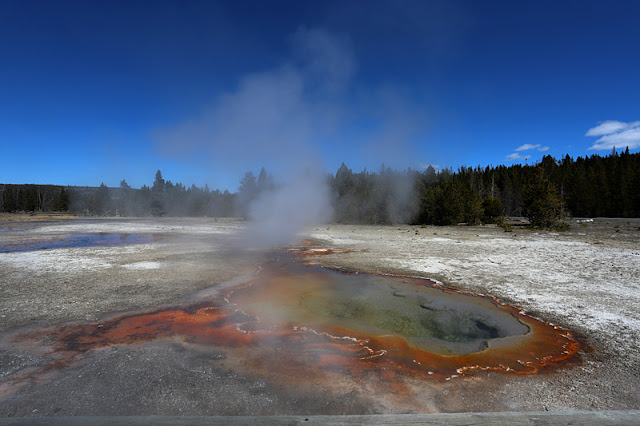 Of all the geysers, the geyser king is, without question, "Old Faithful". One of the most common questions you'll hear, almost anywhere in the park, is "When will Old Faithful erupt?"

Now, you might think it's a difficult thing to predict. After all, Mother Nature will do as she damn well pleases, right?

Well, the reality is that scientists have gotten to the point where they can accurately predict the eruption, within 10 minutes, about 90% of the time. In this case, we were told it would erupt at 2:50pm. Actual eruption time? 2:49pm.

Now, something to keep in mind is that, while most people take the time to drive themselves around the park, there are a number of tour companies who'll happily do the driving for you, and they'll provide narration throughout your tour. There are a number of them listed on Google. Be forewarned, though, none of them are inexpensive. Depending on your departure point, the costs start right around $260 for a full day trip with a private guide: 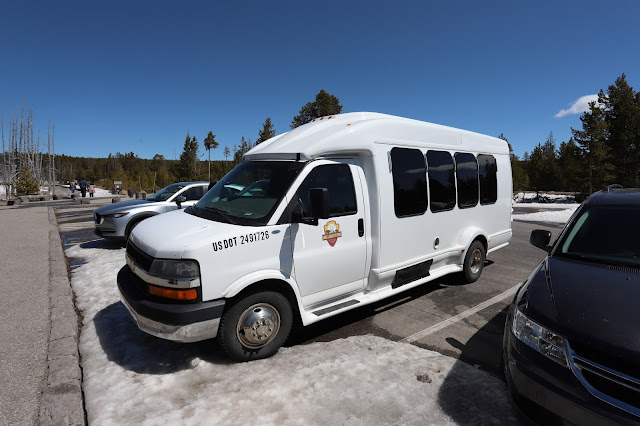 Now, let's go back to that aforementioned plan...

When we first got to the park, the Ranger gave us a map. Any roads show in blue or black were open. Roads shown in any other color were closed. As we looked at the map, the first thing we noticed was that the east entrance, and the road leading to it, were orange.

Of course, this failed to meet our criteria for being able to exit the park.

The road to the northeast entrance, however, was shown in black. "Excellent", I thought. This wouldn't take us out of our way too far, and we wouldn't fall behind on our schedule all too much. So, we got in the car at Old Faithful, and made the 40 minute drive to the northeast entrance. It was a short drive to the town of Cooke City, where we decided to fill up and get a bite to eat. The Prospector Restaurant, in the Soda Butte Lodge, was the only game in town, so we went in:

Some nice warm food recharged our batteries a bit, and we were all ready to hit the road. We'd be taking Route 212 out of Cooke City and onto our next destination.

Well, that was the plan, anyway. Remember the plan?

While the park map showed that the park road leading to the northeast gate  was open, it said nothing of whether or not the road would be open beyond that. We quickly found out that it would not be. In fact, it was covered in snow.

A lot of snow.

We got to the north entrance, exited the park, and found a gas station. After speaking with the proprietor for a bit, we were assured the roads were clear. So, we developed a plan to drive as long as we could reasonably stay awake. We'd gotten to the park about 11am. It was now about 10pm and we were tired. After looking at GPS and assessing our own road-worthiness, we decided we would stop in Billings MT, about three hours away.

Our day finally ended when we got to out hotel. It wasn't hip and it wasn't fancy, but it was comfortable and getting a late check-out the next day wasn't an issue.

All in all, with all of the recalibrations we were forced to make because of road closures, it was an absolutely amazing day. It's difficult to describe Yellowstone National Park in just a few words, and I have my doubts that the words I've written here suffice. But go see for yourself.

It really is one of those places which truly defies description...