It's  been said that the movie "Titanic" makes women cry, and the movie "Rudy" makes men cry.

If you're not familiar with the film, it's the true story of Daniel Ruettiger, a kid from Joliet, Illinois who always wanted to play football for the University of Notre Dame. He faced a lot of obstacles (grades, his size, money for tuition) but, in true storybook fashion, "Rudy" ends up getting to play in the final game of his senior year at Notre Dame against Georgia Tech in 1975, registering a sack on the final play of the game and getting carried off the field:

Like Rudy, I'd always wanted to go to Notre Dame, but my desire wasn't to play football there. I just wanted to photograph it And, of course, there was the side benefit of of not needing the grades or the tuition to get there.

The University of Notre Dame is only a short 20 minute drive from where I was staying in South Bend, so I packed up my cameras and headed that way.

I remember reading once that Rollins College, in Winter Park, Florida was ranked as the most beautiful college campus in the United States. If that's true, then the campus of the University of Notre Dame has to be a really close second. I spend a good deal of time on college campuses, and have visited campuses from California to Ireland, and Notre Dame is quite a site to see. It's stunning.

Notre Dame is a private Catholic university founded by Edward Sorin in 1842. It was initially an all-male institution, and it remained that way until Mary Ann Proctor, a transfer from nearby St. Mary's College, became the first female undergraduate in 1971.

Because of the whole Covid-19 thing, I wasn't sure if I was going to be able to gain access to the university. But, being a Catholic university, they're more than willing to welcome anyone who asks to visit the grotto:

Built in 1896, the grotto is a reproduction of the Grotto of Our Lady of Lourdes in Lourdes, France, albeit one seventh the size of its French namesake.

We've all seen candles burning in churches and cathedrals and, yes, grottos, but do you know what it actually symbolizes? I sure didn't. But I was compelled to research it a bit after a visit to New York City and St. Patrick's Cathedral in October. You can read about the significance of the candle burning here: What does it mean? 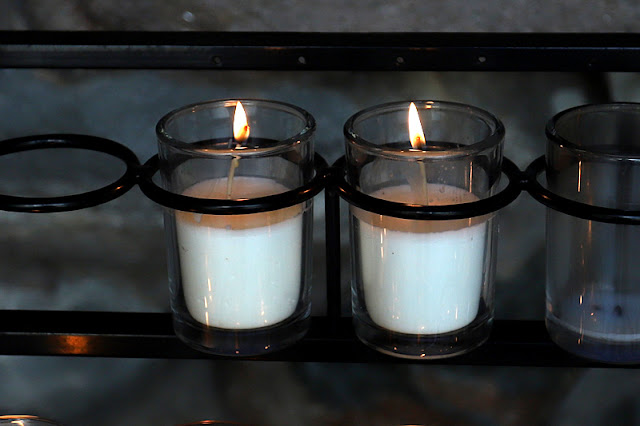 The Grotto is one of the most popular places on campus. I was there for about a half hour and there was a steady stream of people, both masked and unmasked, who came to light candles or just to pray or have a moment of quiet meditation. I'll never be accused of being the most religious guy in the room, but even I could understand the importance of such a place to the faithful.

I was able to get parking near the grotto, so I elected to just grab my camera and leave my car parked where it was.

As I walked along I had to marvel at what I was seeing. The grounds were impeccably maintained, as if every blade of grass was pointed in just the right direction. Flowerbeds were vibrant and full, and the trees were trimmed just right. It was almost as if it was the fictional version of someone's idea of perfection. Hey, who knows? Maybe it is.

Another popular site on campus, and in all of northern Indiana, is the Basilica of the Sacred Heart. The bell tower is 230 feet high, making it the tallest University chapel anywhere in the United States, and it's listed on the National Register of Historic Places.

The Basilica, as well as the Main Administration Building, are located at the center of the campus on the Main Quad, more affectionately known as the "God Quad":

Not far from the Basilica is the Main Administration Building. Built in 1879, it replaced the original, which was built in 1865, was destroyed by fire. It was completed by 56 bricklayers in just over a year, and it contains approximately 4.35 million bricks:

Frankly, it's not all to difficult to imagine what the stadium sounds like on game day; the sounds that Rudy heard when he took the field in 1975 echo here every Saturday during football season.

It was surprisingly easy to walk right up to the stadium, although it was locked and inaccessible. Even still, it was exciting, if only just a little, to catch a glimpse of the field from the Knute Rockne Gate:

I think more than anything, though, the one thing I wanted to photograph here was the 134-foot by 68-foot mural "The Word Of Life" on the side of the Theodore Hesburgh Library. As it looks down to the north end of Notre Dame Stadium, it's commonly referred to as "Touchdown Jesus". I think the reason is pretty obvious:


In this screenshot from the movie "Rudy" (which was filed at the university), you clearly see "Touchdown Jesus" in the background:

As I walked back to my car, it finally started to drizzle; it'd been threatening for a good part of the day. As I returned my camera to my trunk the skies opened up, but I was able to get into the dry confines of my car before the first drops hit the ground. I'd spent a few hours at the campus, but I wanted to get back to the confines of the studio which doubled as my hotel.

Should you ever find yourself in northern Indiana, I'd highly recommend you spend a few hours at Notre Dame. Its storied presence is simply remarkable...