After getting back on the road, I couldn't help but keep thinking about the fact that I was four days behind on some schedule that I'd put together in my head and in Microsoft Word. I had my entire cross-country itinerary laid out, and now it was shot to Hell.
But, as much as I felt a bit of angst about getting "behind" so quickly, I was also quick to find the silver lining. Had I left Florence on Wednesday, I would've been slammed with rain through Sioux Falls, South Dakota. But, because I left four days later, the rain's had time to move out, leaving only sunshine for me to shoot with.
I wasn't really planning on doing much shooting today. Instead, I planned just to get to my swanky digs at the Arrowhead Motel in Buffalo, Wyoming and be done with the day. Just as I'd decided that I was really looking forward to that, I saw the sign: "Little Bighorn Battlefield National Monument - Next Exit".
I had to go.
I don't know what I expected Little Bighorn to be, but I suppose I'd always pictured it a little different than what it actually is. I'd always pictured General Custer and his 700 soldiers and scouts as being surrounded by Lakota, Arapaho and Cheyenne Indians, who were at high points around the battlefield. In fact, the opposite is true. What's commonly known as "Custer's Last Stand" took place on what's known as "Last Stand Hill", where Custer and his men had the high point. They were simply overwhelmed by the warriors led by Crazy Horse on June 25-26, 1876.
It's an expansive tract of land; some 765 acres. And, strewn throughout the land are marble markers indicating where a soldier fell:


Markers also indicate where Indian warriors fell:
The remains of US Army solders, including Custer, were initially buried on the battlefield. Custer's partial remains were re-interred at West Point Military Academy in New York. A mass grave was dug, and unidentified remains of US Army soldiers were buried in that grave. A US Army memorial was erected only feet from where Custer's remains were originally recovered, and near the mass grave:
Of course, the Army didn't suffer the only casualties. Lakota, Cheyenne and Arapaho tribes also lost warriors. The fallen Indian warriors have their own memorial on the battlefield. In 1996, the National Park Service - guided by the Little Bighorn Battlefield National Monument Advisory Committee, made up of members from the Indian nations involved in the battle, historians, artists and landscape architects - conducted a national design competition. In 1997 a winning design was selected.


Little Bighorn is also the home to Custer National Cemetery. It's been full since the mid 1970's so, if you're a veteran, you can put internment here out of your mind. I have to admit, though, it would be a pretty cool place to call your final resting place. 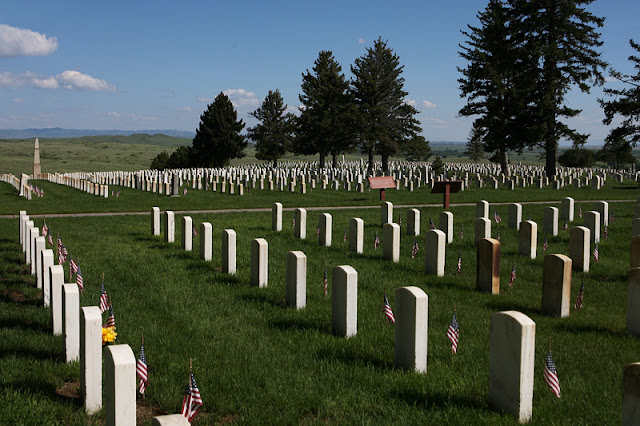 I'd not set out to visit Little Bighorn, nor did I expect I ever would. But I'm glad I decided to add a couple of hours to my trip. Otherwise, my expectations would've, sadly, been met...
at June 02, 2013