We found our way across the northern tip of Salton Sea, and made our way south on Highway 11 towards North Shore. By this time, the temperature was already creeping towards the triple digit range, and we knew we were going to be in for a long, hot day.

Our first stop was at a place called, literally enough, North Shore. It was here where I really felt the present butting heads with the past. One the one hand, you had the North Shore Yacht Club. This was a nice, modern facility which was quite obviously well maintained:

Just about 200 yards further south, though, was a shell of a building. It was, at some point, a bait shot and cafe. It's been completely gutted, though, and the only inhabitants these days appear to be pigeons trying to stay out of the heat: 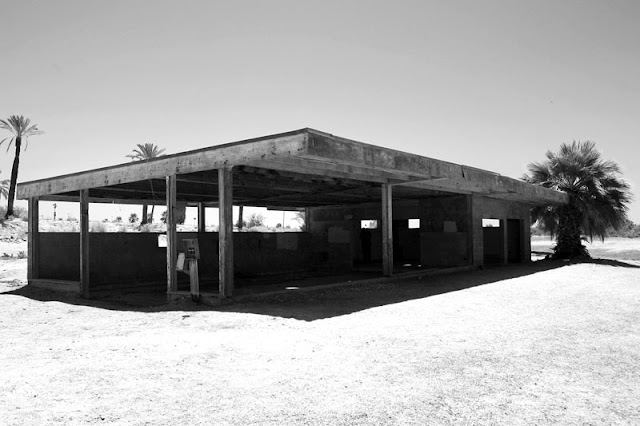 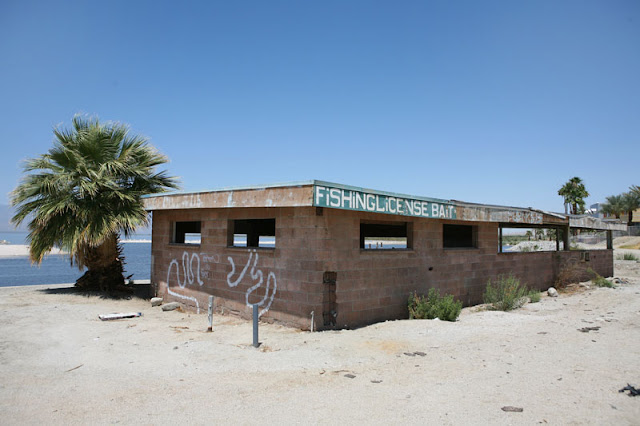 We hopped back in the car and drove south a little ways to the Visitor Center for the Salton Sea State Recreation Area. It was mildly depressing, though, to see the sign that had been affixed to the entrance sign:

Sadly, the Salton Sea State Recreation Area is falling victim to budget cuts. According to some park personnel we spoke with, it'll happen on June 30th of this year. I immediately felt fortunate that Ed and I decided to head out on this trip when we did. We were completely unaware of the closing when we decided to do this. It was at that point where I felt myself getting a bit angry because, well, what if we hadn't decided to do the trip now? Had we waited until late summer, we wouldn't have been able to get access to the shoreline, as the plan is to, for whatever reason, fence off these areas to keep the public at bay. Now, as I said earlier, this is the first time in over 30 years that I've been out here but, even still, the thought that it's going to be fenced off pissed me off a little bit.

We paid our five dollars and went into the park. We found the Visitor Center (which was closed despite being business hours) and walked around for a little while, just exploring. 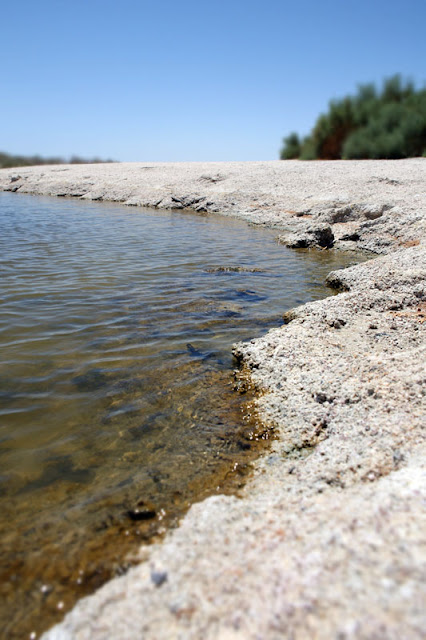 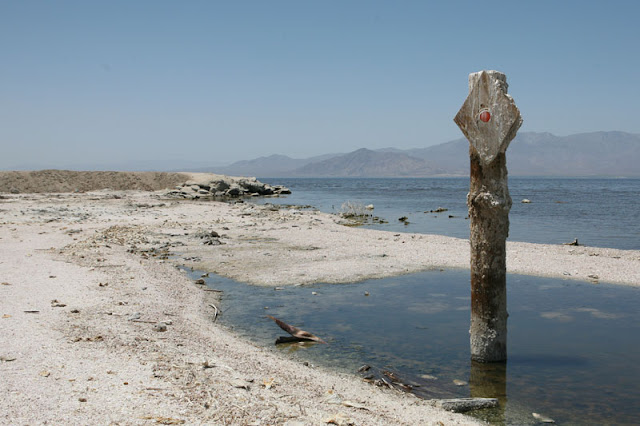 I did my level best to try to get some "artsy" stuff, but I think Ed may have bested me in that regard. He was shooting a lot of fish-eye stuff and working on some high-dynamic-range stuff that, frankly, I haven't fully wrapped my head around yet.

From North Shore, we drove down to Mecca. Mecca can best be described as an inhospitable, barren wasteland. There's just nothing there and, if there is, they hide it pretty well. The salt crunches under your feet as you walk, which negates any possibility of slowly approaching the shore birds which populate the area. It was as barren as the day is long but, apparently, someone believed it should be furnished:

To go along with the profound lack of shade in Mecca is heat. A lot of it. As we were leaving Mecca, we saw that the temperature had officially climbed into the triple digits:

Our next stop after Mecca was a real brief one. It's funny how quickly two guys with photo equipment will jump off the main road for the chance to take photos of old, abandoned, dilapidated buildings. Yet, that's exactly what happened as we entered the town (or village or hamlet) of Corvina.

Like many of the towns dotting the shoreline, Corvina's main residential area included "hook ups". It was an area for, primarily, motor homes, and it was largely uninhabited. But right by the main entrance to the trailer park in Corvina was something which had, by now, become quite commonplace: a closed business:

The overwhelming theme of the day was one of, well, depression. Not in the "Golly, I sure am depressed" way, but more of the "Wow, this whole portion of California is economically depressed to the nth degree". It was amazing to me, to be completely honest. As expensive and desirable as southern California real estate is, this whole area seems to be completely ignored. At first I thought it might be the oppressive heat, but Borrego Springs, which isn't that far away and has no lake, saltwater or otherwise, seems to be in good shape.

There's something about this whole area which I just can't seem to put my finger on...