I first came to southern California in 1981. I was six months out of high school when I joined the Navy, and the rating that I chose, Sonar Technician, had its school in San Diego. That’s the short version of how I ended up here. I don’t know, however, that there’s a short version to explain how it is that it’s taken me, in some cases, more than 30 years to find some of the cooler things to see in southern California.

About 90 miles east northeast from downtown San Diego is a body of water known as the Salton Sea. Just east of the Anza-Borrego Desert, it’s located in an area which tends to warm up rather significantly as you move closer to summer. This was exactly the case when my buddy Ed Talorda and I decided to pack up our photo gear into Ed’s Toyota RAV4 and head out to the desert.

We found our way over the Cuyamaca Mountains and down into Anza-Borrego State Park. Anza-Borrego is some 600,000 square acres, and completely surrounds the town of Borrego Springs. We made a quick stop for some coffee and gas, and then continued our way east through the park and out to the western shore of Salton Sea.

One of the more difficult things to find at 8:30am on a Wednesday morning in Desert Shores, California is a decent breakfast. I decided to use Siri on my iPhone 4s, and she quickly let us know that we weren’t far from Holly May’s Bar & Grill. Unfortunately, nobody bothered to tell Siri that Holly May’s was, like most other businesses in town, no longer in existence. Instead, we backtracked to the Red Earth Casino and Café 86 (conveniently located on Highway 86), and settled in for a quick, uneventful breakfast:


After breakfast, we decided to drive back into Desert Shores. As I mentioned before, most of anything in the way of even a once-identifiable business in Desert Shores is now gone. In fact, the only business I saw that looked like it was still in operation was the Sea Sun Motel on the south side of Desert Shores Drive. I can’t help but think that the one car in the parking lot was an omen of what lay in store for them.

We continued to the end of Desert Shores Drive and ended up in front of the Desert Shores Fire Department. If you ever needed proof that a town was on the ass-end of a long downhill slide, consider whether or not the local Fire Department is still in operation. Sadly, this one was not:

Desert Shores is surreal. There are no houses, only mobile homes. I did see some nice, newer vehicles, but the only other person I saw the whole time we were there was Ed. I have to imagine that, at one time, Desert Shores was a pretty happening place. Such is not the case these days. This has got to be about as close as you can get to being a ghost town without actually being designated a ghost town. Even businesses that you might think could survive in a hotter climate; those with swimming pools, had long ago locked their doors, boarded up their windows and simply went away: 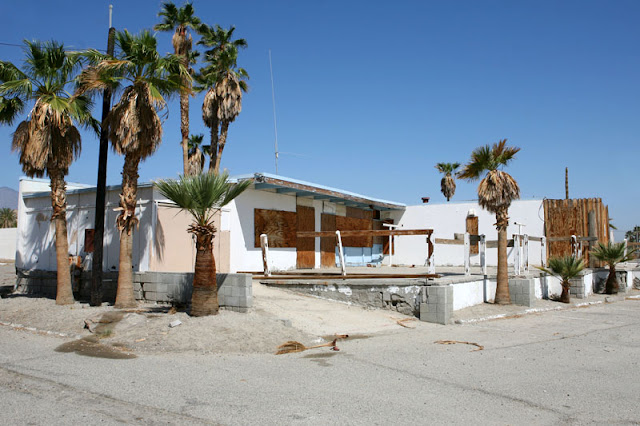 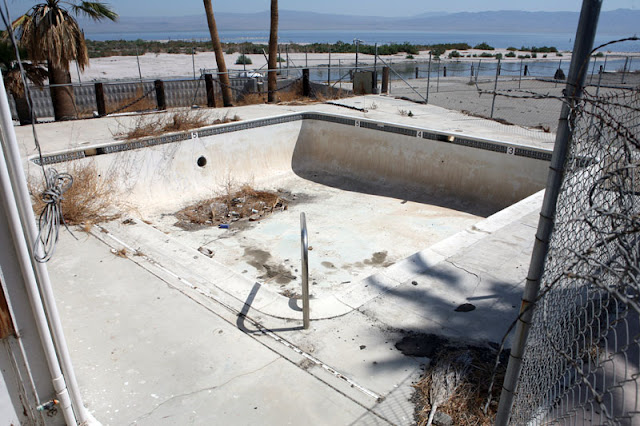 ﻿
Now, if I lived in a place like Desert Shores, I think I might want a place where I could stop off for a cold one from time to time. Someplace that’s not too far away, with an inviting vibe. Well, once upon a time, such a place might’ve been the “Our Place Saloon”. It was, at one time, probably the place where  some of the locals would drag up a barstool after a day at work and trade war stories from the day. Whatever it used to be, though, is undeniably far different from what it actually is:


On the way out of Desert Shores, we passed the once-welcoming stone entranceways and Li’s Chinese Restaurant. Something about the fact that the sign for the Chinese restaurant had the word “Abierto” on it struck me as funny. What wasn’t funny, though, was that Li’s Chinese Kitchen is just another example of a business which, for whatever reason, just ceased being a business:


As we drove north on Highway 86, I couldn’t help but wonder what Desert Shores was like 25 years ago, and what it might be like 25 year from now…