This is going to a longer than normal entry, only because this trip was so cool. I was doing an album cover shoot for my buddy Jeff Pritchett, a guitarist out of Houston. I'd been looking forward to this trip for a while, and it was an absolute blast.
It started with me flying into Dallas. My frequent flyer points wouldn't cover the flight to Austin, so I flew to Dallas on Thursday and drove down to Austin on Friday. I was told the drive wasn't bad; a mere three hours. Ordinarily, a three hour drive isn't too daunting to me. I do it all the time when I'm in Canada. But, at the end of this particular three hour drive, if you'd have told me that I'd just driven for five hours, I would've believed you. ﻿﻿

The drive absolutely sucked the life out of me. I made it, though, and was happy when I pulled into my hotel on the north side of Austin.
The first night, we took it kinda' easy. Jeff had just driven in from Houston, and neither of us was too ready to spend much time exploring the local night life. We decided on dinner at Uncle Billy's, a Bar-B-Q joint overlooking Travis Lake. Good ol' pulled pork with beans, and a view that was pretty damn impressive:
Neither of us had too much life left in our tanks following dinner, so we decided to call it a night. Jeff dropped me off at my hotel before heading back to his sister's house, where he was staying. We agreed on breakfast the next morning.

Saturday was going to see the lion's share of the shooting, so we wanted to make sure that we had our nourishment. Jeff recommended what is, apparently, a local legendary eatery, Juan In A Million. They serve something called the Don Juan Taco and, if you order it, you'd better bring your A-game.

We did not bring our A-game.

Eggs, cheese, potatoes, bacon, and presumably a whole host of other things that aren't good for you, all wrapped up in steamy hot tortillas:


The first thing I noticed about this joint was how crowded it was. After spending an eternity looking for a parking spot, we walked around the front of the restaurant to see no less than 20 people waiting for a table. I expected the hostess to tell us we'd have about an hour wait. "About ten minutes" was the response to our question about the wait. It was ten minutes that were worth waiting.

After breakfast, we decided to go scout around for places to shoot. Our first stop was a park called Auditorium Shores, which is adjacent to Lady Bird Lake. It's across from downtown Austin, and it's ridiculously picturesque:

Auditorium Shores has a pretty large "leash free" zone for dogs, and there were no shortage of them. As the temperature was hovering near 100 degrees, the dogs availed themselves of the lake to cool off:

Auditorium Shores also had a bit of significance for me. I'm a huge Stevie Ray Vaughan fan. I never got to see him in concert, but I'd always wanted to visit his memorial at this park. He's cast in bronze, holding his Fender Strat, and he's wearing his signature hat and poncho. It was alnost weird, really; this larger than life statue on the banks of the lake. But it's a way, I suppose, for people to show their respects in a way, and I certainly showed mine:


We decided we'd come back to Auditorium Shores that night. We liked some of the locales we found, but we both thought we'd get better results at night.

After Auditorium Shores, we decided to head over to the Capitol Building. Jeff wanted to do some shooting there to get some true "Texas" flair:

We spent about an hour or so shooting in and around the Capitol; lots of cool little niches and architecture to use. After deciding to move on, we stepped outside the front steps into a protest against the TSA. While I won't get all political and get into what the protest was about (you can get that by Googling "Texas TSA protest", it was interesting to see the vast array of characters all pissed off at the Federal government:


After that exercise in the 1st Amendment, we decided to head up to the South Congress district, which is just a few blocks from the Capital building. "South Congress" is a funky, hip part of town with cool shop after cool shop, as well as cool eateries along the road:


We decided that it might be time to enjoy a cold adult beverage, so we headed over to the Continental Club. I've heard of this joint. Stevie Ray played there "back in the day", as well as guys like Junior Brown and Johnny Winter. Much to our chagrin, though, it wasn't yet open when we arrived:


As the Continental was closed, we concluded that it was time to head down to 6th Street. 6th Street is to Austin what the Gaslamp District is to San Diego. It's where you go when you want to go to a restaurant, hear a band, or just relax in a quiet pub for a beer.

We started with a Guinness as B.D. Riley's, an Irish pub which was quiet and cool. I gotta' tell ya', there's nothing like a Guinness in an Irish pub. Jeff and I decided that, if one Guinness was good, two would be better. That second one was pretty tasty:


After B. D. Riley's, we decided to simply walk along the street. We were still scouting locations at this point, and enjoying refreshments along the way. 6th Street is simply one of the coolest stretches of city street anywhere in America. Walk into one bar and, if you don't like the music, walk out and go into the next, which is usually the next door you come to. And it's no big secret that Austin is proud of its' extensive musical heritage:


We soon found ourselves in Coyote Ugly. I've heard of this bar; I never saw the movie, but I suspect it wasn't a whole lot different than this place. Bartenders tell dirty jokes over the PA, berate customers for whatever they deem offensive, and even enjoy the occasional cocktail with the clientele. In short, it was pretty damn cool. Reanna, one of our bartenders, took great care of us, and I'm pretty sure she threw a few back with us, as well.


We spent some time on the deck at Coyote Ugly, and before long, we were approached by one of the bouncers, a rather intimidating guy with one of the most bitchin' beards I've ever seen. He just wanted to sit down and shoot the breeze before the place started coming off the rails. Mack's a former Marine, and he also competes in beard contests. Unbeknownst to me, there's actually something called the World Beard and Moustache Championships. Who knew? Mack's been growing his beard for 14 months, and I think he's gonna' do pretty well in anything in which beards are judged. I mean, c'mon, look at this; it's awesome:

After hanging out at Coyote Ugly for what proved to be way too long, we walked back to the truck to get ready to do some shooting. The truth is that, up until this point, I'd been doing a lot of shooting with the Canon G12. I know I talk about this camera a lot, but it's deserving of it. It's one Helluva' camera. A number of the shots that will end up on the album cover were taken with the G12.

After doing some shooting in the parking garage we were in, we decided to head back over to Auditorium Shores and do some night shooting. It was a bit of a challenge, but both Jeff and I were happy (well, he happier than my hyper-critical self) with what we ended up with, so we counted it as a success.


After spending about two hours shooting, we'd both had enough. It was a long day and, the longer we stayed out, the longer it would be. Jeff dropped me off at my hotel and headed out into the night.

While we'd originally planned to shoot Sunday morning, as well, I don't think either of us were too eager to get out into the heat of sunny Sunday June morning in Austin, Texas. Instead, we decided that we were satisfied with the shooting of the day before, and simply opted for a (very) late breakfast before I had to drive back to Dallas to catch my flight.

It would be another life-sucking siege of a drive but, hey, at least I had coffee: 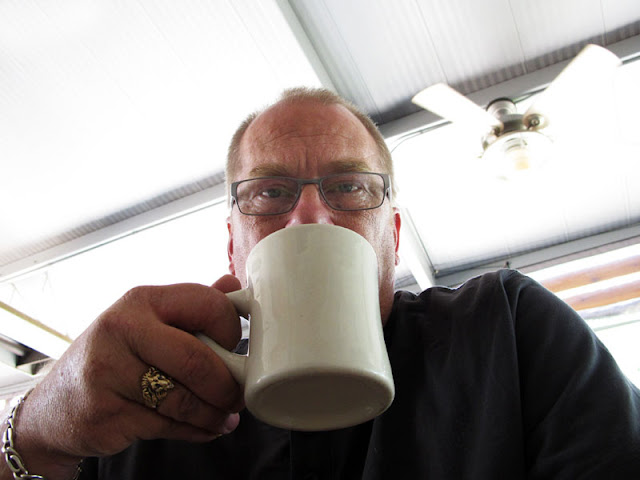