The one thing I wanted to do in New York City was visit B&H Photo on 9th Avenue. They've gotten more than just a little bit of my money over the years, mainly through their website, but I always like to go into the store and make a purchase while I'm there. his trip I decided I would buy a brown leather case for the Fuji.

So, from our hotel on 44th and 7th we walked down to 34th and 9th to visit B&H. If you've never been there, and you're a photographer of any level, you need to visit once in your life. The way they do business is amazing, and the amount of stock they have on hand boggles the mind.

Anyway, I got the case I wanted in pretty short order, and it wasn't long before we were out the door, turning the corner and making our way to the subway at Penn Station:

We probably could've taken the subway couple of more stops to get to where we wanted to go (New York City Harley Davidson), but got off not far from Washington Square Park.

Washington Square Park is one of those places you've seen in movies or on television and just didn't know what you were looking at. About ten acres in size, it's located in Greenwich Village and is accessible 24 hours a day. The iconic Washington Square Arch is located at the north entrance to the park, and is reminiscent of the Arc de Triomphe in Paris, albeit much smaller:

Most of the building surrounding the park are now part of New York University, but once served as hotels, homes and businesses. The park itself is a favorite among street performers, artists, and just about anyone who just wants to kick their shoes off and relax for a bit.

We finally made our way to New York City Harley Davidson (hey, had to get the shirt!) and did some other shopping along the way. We finally decided it was time to take the subway back up to Times Square so we could drop off what we'd bought at the hotel before continuing on with our afternoon.

After getting done at the hotel, we started making our way up towards Central Park. It was a good walk (about 14 blocks) but the weather was great. The idea was to take a carriage ride through the park and get a guided tour of some of the more interesting sites throughout the park. Once we got to the park, though, we were approached by a young man who successfully wooed us away from a horse and carriage and into his pedicab.

Originally from Ghana, his name was Abadou, but he said everyone called him "Smiley". I could see why. The guy was one of the happiest people I'd ever seen in New York. I'd be willing to bet that he knew more about New York than most New Yorkers, and definitely more about Central Park than anyone I've ever met:


Unfortunately, every tour through Central Park includes a stop here, at the Dakota. On December 8, 1980, former Beatle John Lennon was gunned down in the entrance of the building after he and Yoko Ono returned home from a recording session.

Interesting note: The flag on the right peak of the building is hoisted whenever Yoko Ono, who is rumored to own more than 30% of the Dakota, is in the building.

Across from the Dakota, along Central Park West, is an area in Central Park known as Strawberry Fields, and it's dedicated to Lennon. You might think, as I did, that the name is derived from the Beatles song of the same name. Well, you would be, as I was, wrong.

Strawberry Field was actually a Salvation Army children's home in Liverpool, not far from where John grew up. He would often ditch school, climb the fence surrounding the grounds and play with the orphans. The song is based on Lennon's memories of that place.

We got back in the pedicab and continued on our way. We finally came up to what's known as the Sheep Meadow, one of the main expansive grassy areas on Central Park (the Great Lawn being the other). Abadou obliged our request to get out here for a few minutes, and another "must do" got taken off the list: 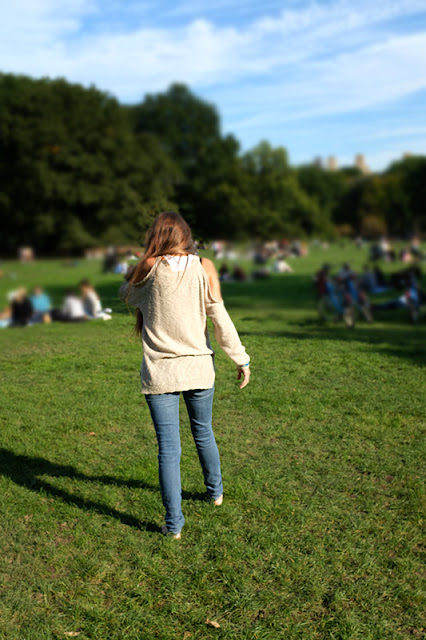 As we started to make our way back to our drop-off point, we came across this character. A friend of Abadou's, Aldo apparently dresses up like this every day and walks around Central Park, kicking his soccer ball along.

Nice work if you can get it...

Abadou dropped us off and thanked us profusely for hiring him. Well, the pleasure was all ours and, if you ever find yourself looking to get a tour of Central Park, seek him out.

It was getting somewhat late in the day and, to be completely honest, we didn't feel like walking 14 blocks back to the hotel. So, we got an Uber and got back quickly. We weren't there long, though, before it dawned on us that we hadn't really eaten all day long. And, seeing as I was pretty disappointed with Ray's Pizza on Thursday night, we set off in search of better pizza.

And that's exactly what we found.

Lazzarra's Pizza is located on the second floor of a rather nondescript building on 38th Street. We were not prepared for what awaited us up these stairs:

While not cut like a traditional triangular slice of pizza, this was absolutely amazing. God knows I like a good piece of pizza, so I don't say this lightly: this may be the best pizza I've ever had; cheese, meatballs, Italian sausage and pepperoni on a very thin crust. Normally, I don't like a really thin crust, but this was utter perfection:

They don't sell slices at Lazzarra's but you can buy a whole pie or a half pie. We opted for the half pie for $12, and Ruthie also got a "small" salad:


With dinner finished, we knew we had to get back to the hotel to start packing. We wouldn't be leaving that early, though, so we decided to make one last stop at our new favorite "out of town bar", O'Donoghue's. We stayed away from the Martinis and Mango Fusions this time around and, instead, went back to our tried and true:

We had our final breakfast in New York, once again, at the Europa Cafe in Times Square. Bagels all around, and I knew I'd miss them (and I do!). But it's not like New York bagels are going anywhere, so I guess we'll just have to come back.

This trip was an absolute blast on so many levels. I know I spoke of how excited I was that it was my first time going to New York with someone who'd never been to New York, and that held true through the entire trip.