I wanted to get some more use out of the car, so I decided to take a drive out to a little (and I do mean little) town on Lake Brachianno called Anguillara Sabazia (hereafter referred to as "Sabazia"). It's popular with Italian tourists, but most foreigners don't really know about it. The only reason I knew it was there was because I found it on Google Earth.

The drive there, though, is about as "into the country" as one can get when venturing out behind the wheel from Rome. At times, it reminded me of drives I've made through Oregon or West Virginia. Being less than 20 miles from Rome, the drive through the countryside was devoid of any highways, which made for a much more enjoyable trip.

I decided on Sabazia simply because the weather was nice and there was a lake. It's difficult to take a bad photo when those two components are present, so the day was already starting out in  my favor.

Upon arriving, the first thing I noticed was the town itself; a medieval mass of dwellings basically built on the side of a mountain. This is actually a pretty common site in Italy as smaller, densely populated enclaves were easier to defend.and more difficult to conquer, especially when it's on a lake.

Driving in a place like Sabazia is absolutely nothing like driving in Florence or Rome. There's just nowhere near the traffic and, in fact, quite often the streets are empty. 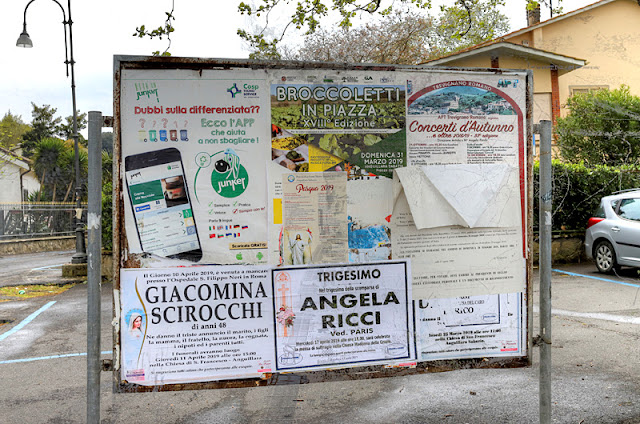 I drove around for a time and, next thing I knew, I was driving through the very core of town. I won't go into the gory details here, but suffice it to say that the core of Sabazia is not where an American would hope to find himself driving.

After extricating myself and the Peugeot 308 (which was a great little car, by the way) from the pathway streets of Sabazia, I drove around the lake for a bit until I came across another vista of the town, perched on its lakeside hill.

If there's one thing I learned about Italy, it's this: If you're not in a big city, a meal can be hard to come by at certain times of day. I was getting hungry. I looked at the dashboard clock and it said 1:40pm. I figured that would be a perfect time for lunch. Unfortunately, the owners of this pleasant looking place didn't agree. You see, after what I assume they believe to be a reasonable lunch hour, a lot of restaurants close until 7:30 or 8:00pm. This was one of those places. Too bad, too, because the menu looked great.

My time in Anguillara Sabazia had come to an end and, as much as I hated to admit it, I was wanting to stay a while longer. There weren't too many shops open, an no restaurants, so it was time to head back to Rome and the comfy confines of my hotel. As I drove out of town, and back towards the city, I was taken by just how much there really is to see when you get into the countryside. This place, which I'd seen driving into Sabazia, just emerged from around a curve. Obviously abandoned, there's no telling what it was or how old it is, and there certainly wasn't anyone around to tell me.

It's one of those things you find in your travels which, despite knowing nothing about it, you know the trip would've been incomplete without it.

With only one more day in Italy, I wanted to make sure I got an early start and, well, that meant getting to bed early, as well. I finished the day with dinner, a glass of wine, and the second worst martini I've ever had.

Tomorrow would be here soon...