Today is a day I never thought I would see. Today is the one year anniversary of me deciding to put into action the plan of standing by a decision I made at the end of 2011.

You see, today, I am proud to say that I am a non-smoker. 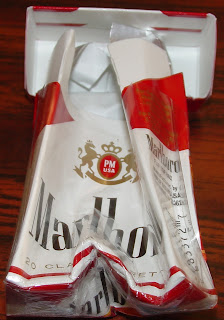 Honest to God, having been a smoker for 35 years, I never thought I would see a day in my adult life when I could say "I've been smoke free for a year". I knew it would be a challenge, and it has been. To be totally honest, though, it wasn't as difficult as I'd feared. If I knew it was going to be as easy as it has been, I'd have done it 25 years ago.

The  simple fear of failure kept me from even wanting to try.

Some stats - consider these to be the averages over 35 years:


Initially, I lost weight. Then I gained weight. I gained a lot of weight. I got up to 277, which is the heaviest I've ever been. At 6'2", I've been able to carry that weight, and most people seem surprised when I tell them how heavy I was (and if they feigned surprise, I appreciate that!), but I'm trying to work on that. Now, I'm sitting around 263. Still, I believe that it's probably better to be a bit overweight than to be a smoker.

I still get cravings; every day, in fact. But they're a lot easier to get through now than they were a year ago. I've come to realize that the cravings will pass whether I light up or not, so I choose not to light up. I still enjoy the smell of cigarette smoke, and I don't run away when someone lights one up near me. I just no longer have the need to join them.

This past year has been, without question, the most tumultuous of my life. I faced more personal pitfalls and challenges than I ever could've imagined. 2012 was absolutely a life changing year for me, on so many levels. It would've been easy, and some would even say understandable, if I'd started smoking again. It was one thing that I could absolutely control, though, and I wasn't about to let it win.

I used Wellbutrin and the patch, and I was successful. A good friend of mine is using the e-cigarette, and that's working for him (although he still needs to address the nicotine part). Whatever works is worth it. I feel better, I no longer get winded climbing a flight of stairs, and I'm able to hike distances without feeling like I'm gonna' die. My clothes don't smell like smoke. If it's cold and wet outside (hey, it is Portland) I don't have to worry about where I'm going to go to have a smoke.

A year ago I decided to quit for no other reason than I didn't want to be a 50 year old smoker.

I now proudly say that I am not...