When I woke up this morning, the sky was kind of overcast, so I had to come to terms with the fact that the weather held out as long as it could. This is, after all, the pacific northwest. It rains here.
A lot.
Be that as it may, I wasn't about to let it destroy my day.
It stayed cloudy while I made my way over to Renton, Washington, to visit the Jimi Hendrix Memorial. It was only about a fifteen minute drive to the Greenwood Memorial Park from my hotel. As I was rolling up to the cemetery, I wasn't sure what to expect. If you've ever seen pictures of Jim Morrison's grave in Paris, fans have gone to the point of all but desecrating the grave with graffiti. I was hopeful that wouldn't be the case with Hendrix, who died a little less than a year and a half later. It wasn't the case at all, and it may just be due to a sign placed near the memorial by the Hendrix family: 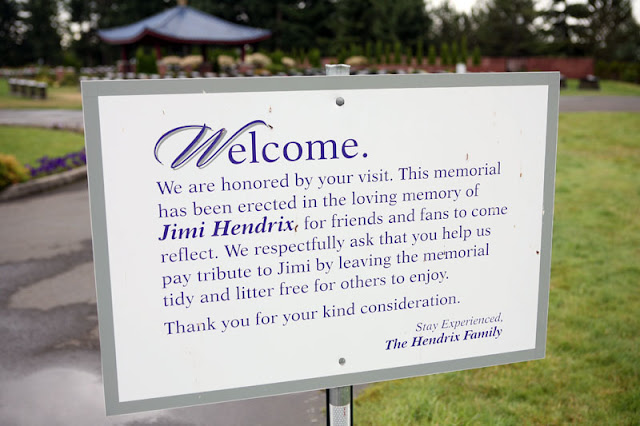 While the sign states that it's a memorial to Jimi, the area serves as the family burial plot. Maybe that has something to do with the respectful condition of the grave.
I normally don't post my own picture in my blog, but I wanted to have a picture of my visit here. A couple visiting from Germany were happy to take my picture: 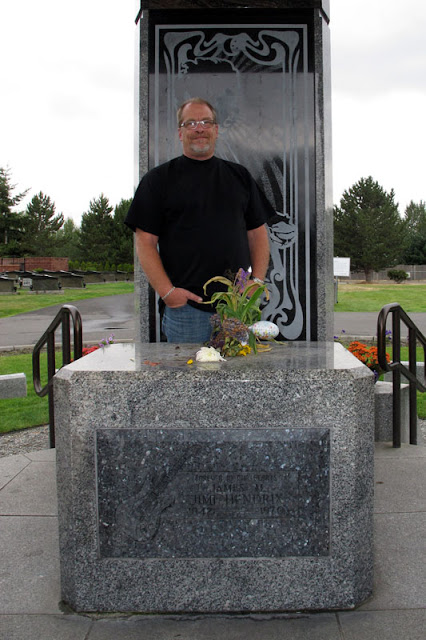 As I left the cemetery, it started to rain, but just a little. Somehow, it seemed appropriate, as "The Sky Is Crying" by Stevie Ray Vaughan (a guitarist on who Hendrix was a great influence)  came on the satellite radio. It was kinda' surreal.
I left Renton and decided to head down to Pike Place Market. I'd been here once in the past, back in 1993 while I was still in the Navy, and I didn't really get to spend much time at all checking the place out.
Pike Place Market is a frenetic marketplace in downtown Seattle and, even on a Wednesday, the place was absolutely packed. It was like a shopping mall the weekend before Christmas. While it got its start as a seafood market in 1907, today you can buy seafood, clothing, arts and crafts, flowers; you name it.
At this point, I'm going t take a break from my usual, long-winded narrative, and just provide some captions:

After walking around Pike Place Market for a while, I decided to make my way over to the Experience Music Project. The "EMP" is dedicated to the history of popular music. It houses the largest collection of Jimi Hendrix memorabilia in the world.


After leaving the Experience Music Project, it was just a short walk around the block to the Seattle Space Needle. The Space Needle reaches 605 feet, and has an observation deck at 520 feet. It opened in 1962 for the World's Fair. I opted not to take the elevator to the observation deck (hey, I've been to the CN Tower in Toronto; the Space Needle's got nothin' for me!), but instead decided to just get some photos:
﻿﻿

﻿From the Space Needle, I decided to head over to the Admiral Way Viewpoint, which is across the bridge which spans Elliott Bay. I was hoping to get a nice shot of downtown Seattle. It was a little bit further across the bay than I expected, but the view was pretty amazing. I would've love to have the chance to take this shot at night:
I'm glad I got the opportunity to do some shooting here. As I said, it's been 18 years since the last time I was here, and I have no idea when I'll find my way back. I really lucked out with the weather, too. I flew into Seattle last Friday, and the sun's been shining, for the most part, ever since...
at September 01, 2011